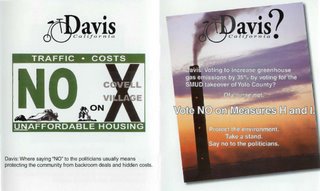 Someone actually warned me that this was coming in the mail, and it’s probably the only thing that saved me from dropping dead, because I’ve seen a lot of things in my time (and my time has not been that long), and yet, I really don’t have good words to describe this. Recall back to last year when a bunch of developers supporting Measure X gathered around and sung “We Shall Overcome.” That’s the kind of moment that this campaign brochure evokes when you see it.

When I was growing up, PG&E built a nuclear powerplant in my backyard on an earthquake fault. Now PG&E claims to be green and suggests that it is not easy being green (cue up Kermit). And evokes the image of the “No on Measure X” as an argument to support PG&E. This is almost like shooting fish in a barrel. If I’m Dick Livingston, I’m suing.

I have to laugh everytime I see the “Yes on K” TV ADs and there is Ted Puntillo trying to sell us on Target. And at some point he talks about how he would like to do all his shopping in Davis and not have to go to Woodland and Sacramento. Do people see through this stuff? First of all, has Ted Puntillo ever gone to Target in his life? Second, even if he has, does all his shopping out of town entail going to Target? It’s amazing suddenly if we have a Target in Davis we go from not being able to buy socks and underwear, to never having to shop out of town again. Wow! Target is not just a superstore, it’s a miracle worker. And good grief–the very same people who are selling us on Target are the very same people who would never ever shop at Target.

And then you have Rich Rifkin. I will never forgive or forget Rich Rifkin who ripped the HRC for having too many periods in their report on racial profiling. It was embarrassing that the Davis Enterprise gave space to that drivel.

He may have topped that on Wednesday.

“I wouldn’t suggest that all members of FETID are stinky, malodorous and in need of a bath. But if you get close enough, you’ll find that most FETID don’t buy deodorant or soap or undergarments. They never shop at Target. They despise “big box.” They are enraged by the idea that the rest of the people in our fair city might actually want a store in town that sells ordinary consumer goods at a decent price, because FETID apparently aren’t keen to be clean.”

Darn it, he’s found me out. He must have read my last blog entry and figured I was on a mission to deprive people of socks and underwear. That I even need to dignify this crap with a response is flat out insulting to me and you. So I’ll just leave it up for posterity.

I guess a couple of “substantive” arguments need rebuttal.

Let me repeat what Paul Navazio, the finance director for the city of Davis, told me a few months ago: Target will generate $659,000 in new net revenues for our city government. That’s a lot of cash. That money’s now going to Woodland, Vacaville, West Sacramento and other surrounding cities.

I love this one–oh, he told you that Target will generate $659,000–that must make it so. In a previous blog entry, we cast doubt on that figure. Regardless, that figure is based on a comparison to an empty field rather than a comparison to an alternative development project there that doesn’t involve a big-box corporation.

Unlike the geniuses on our Planning Commission, I think most people in Davis would like our city government to keep our sales tax monies. If we vote against Target, we know for certain that the city of Davis will lose $659,000 a year.

That’s perhaps the biggest beef I have with Rifkin–his irreverence. This type of column backfires because people in Davis are not stupid. They read this stuff as mean-spirited and over-the-top. It’s not worth the paper it’s written on.

Let’s have an honest debate on Target and the future of the city. This is just a bunch of insults wrapped in psuedo-satire. The people of Davis deserve better than that.