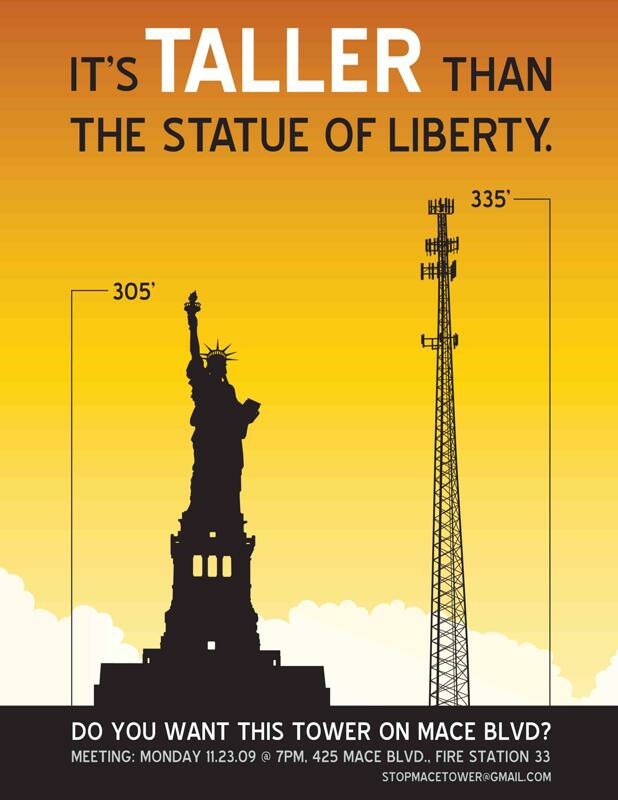 The third agenda item on Thursday’s Yolo County Planning Commission was a public hearing for Results Radio’s application for a use permit for a 335 foot tall radio tower on Mace Boulevard, three quarters of a mile south of Montgomery on agricultural land zoned A-1, which means the land should only be used for agriculture.

Because Results Radio had officially asked for a continuance, County Council told the Commissioners that the only decision they could legally make was to continue the hearing until a later date.  Before they made that decision, the Commissioners heard Staff’s report on the application, as well as testimony from the applicant, the public, and Bill Abbott the land use lawyer engaged by some of the members of the Southeast Davis Coalition that formally opposes the application.  After the testimony each Commissioner made comments and gave the applicant guidance.  The continuance was officially until March.

I’m not going to go into the details of what the Planning Commission heard.  That has been covered well here in the Vanguard and in both articles and letters to the Editor in the Enterprise.  What I am going to discuss is what the options are going forward.

My sense is that the Commissioners heard the public comments loud and clear. Commissioner Richard Reed (who represents the same Davis-based district as Supervisor Jim Provenza) said the Yolo County Landfill alternative site for the tower presented by the Southeast Davis Coalition in their testimony, “looked like a credible alternative,” and that he needed to “be convinced that there’s absolutely no other place this would work.”

Results Radio’s Chief Technical Officer told the Commission he would work on the possibility of the Landfill alternative, but he also went to great lengths to emphasize his desire to continue to work with the neighbors of the site proposed in the application.   One has to wonder how much real commitment there is to an alternative site (that has no neighbors nearby) when you say, “I will meet with anyone anywhere. I’ll meet in front of large groups of people; I’ll meet individually over coffee; I’ll go to people’s homes.”  Bottom-line, Castro’s words lead me to believe that this battle is not over,

“Where do we go from here?”

There are implications for all Davis-area activist groups who have opposed, or will oppose business-based land use proposals in that simple question.  The reason is simple.  Depending on how Results Radio chooses to work on the alternative, there is a very good possibility that when the Planning Commission next places this item on its agenda, Mr. Castro will step to the podium and explain to the Commission that, despite all his best efforts, the FCC will not approve locating the tower on the Landfill.  The conundrum for the Commission and the public is trying to decide if Results Radio has truly put forth its best efforts in asking the FCC for its approval.

Should activist groups have to “do the heavy lifting” for the business?  In this case there is no question that there are significant public benefits associated with relocating Results Radio’s broadcast tower from Sutter Buttes to Yolo County.  KDVS would be able to better serve its UCD audience.  The Yolo Emergency Communications Agency could improve emergency broadcast quality for police, fire and disaster communications for a huge proportion of Yolo County residents.  All the desired objectives can be achieved at a Landfill site, but only if Results Radio truly puts forth its best efforts with the FCC.

To make this into a true win-win for all parties, the Southeast Davis Coalition may need to research the FCC location issues for the Landfill site and address any compliance challenges that may arise.  In many ways this could end up being like the recent FEMA flood zone situation, where private citizens getting expert help supports a better decision.  However, I’m not truly knowledgeable enough about the FCC to even hiccup, much less make recommendations.  How best to proceed in this specific issue, will be discussed during the next Southeast Davis Coalition meeting.  Who bears the cost of the FCC-specific research will also be discussed.

Many Davis land use activist groups may well be facing similar meetings in the coming months and years as they step forward with opposition to land use proposals that are focused on a particular end-result the way Results Radio appears to be.  One would hope that well researched information will be available to support a decision in the best interests of Davis, but that may not always be the case.

6 thoughts on “In Search of An Alternative Radio Tower Location”