Overall one has to say the news could have been far worse when the Pew Center on the State puts California’s state retirement system into the “needs improvement” category as opposed to the lower category of “serious concerns.”  Moreover, the study show the impact on the public pension system due to the collapse of the financial markets, however it does not include the rebound that occurred at least on Wall Street after mid-2009.

Overall the numbers look like this: California’s state retirement systems have promised current and retired workers around $3.35 trillion in pension, health care, and other post-employment befits as of 2008 but have $2.35 trillion on hand to pay for them.  Strictly looking at the retirement system, there were $454 billion in pension and benefits on the book in 2008, $59 billion was unfunded liability, that means that the fund had the assets to cover 87 percent of its obligations.

Their synopsis is this:

In aggregate, states’ systems were 84 percent funded–a relatively positive outcome, because most experts advise at least an 80 percent funding level. Still, the unfunded portion–almost $452 billion–is substantial, and states’ overall performance was down slightly from an 85 percent combined funding level, against a $2.3 trillion total liability, in fiscal year 2006. These pension bills come due over time, with the current liability representing benefits that will be paid out to both current and future retirees. Liabilities will continue to grow and, as more workers approach retirement, the consequences of delayed funding will become more pronounced.

However, that seems to understate the nature of the problem.  First, the state is trending in the wrong way.  Between 1997 and 2001, the state was able to consistently meet its actuarially required pension contributions.  However, following 2002, it has not been able to make this payment in full.  From 1999 to 2008, the state’s pension liabilities grew 125 percent which greatly outpaced assets which only grew at 65 percent.  During that time, the pension fund went from 118% funded to 87% funded.

The even more alarming trend, and the one that we are facing in Davis is the unfunded liability in retirement health.  Retiree health care and other benefits represent only 12 percent of California’s total retirement bill but they are 40 percent of the state’s retirement funding shortfall.

“The state has set aside only $3 million to cover the $62 billion, long-term liability for retiree health care and other benefits. In the face of California’s fiscal crisis, addressing this bill coming due will be a daunting challenge.”

Thus the health care and other post-employment benefit programs are less than 0.01% funded. 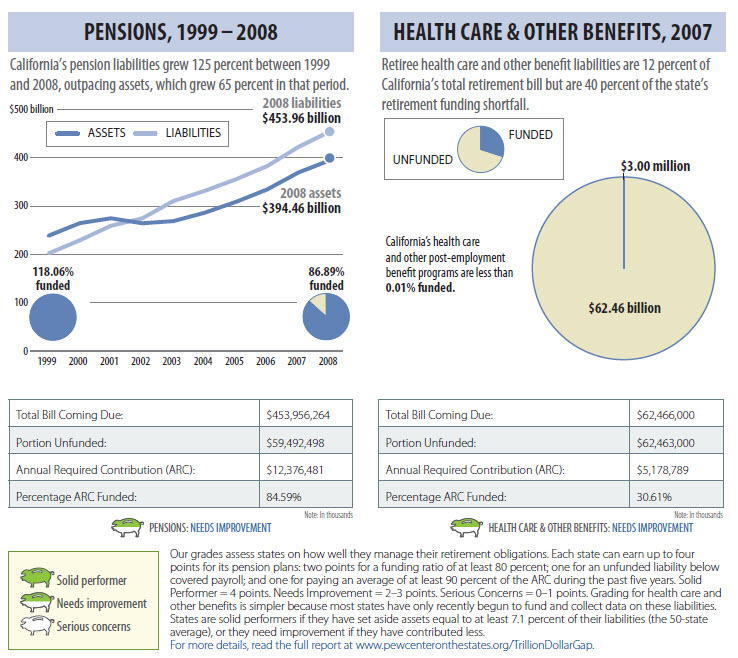 Most of the current reform efforts seek to cap benefits, while that may be one approach it may not be the best approach.  More importantly what needs to happen is a higher percentage of the obligation needs to be pre-funded, that’s really what this research is showing, particularly on the health side, but also on the pension side.

The idea of an unfunded liability is that we simply have not put enough money in up front to pay our obligations.  CalPERS is gambling on a rate-smoothing plan over 30 years to lower the hit, but if we simply fund these upfront, we do not need to roll the proverbial dice in this matter.

Naturally there has been much talk about going to a two-tiered system, but there are perils in that system, particularly since you have unequal benefits for newer employees.  That simply is an arrangement that is unsustainable over time and over collective bargaining agreements.

The simpler solution is for mechanisms be put into place to require full-funding for all pensions and benefits.  This will not by itself solve the problem, but much as the GASB-45 requirements, it will reveal the actual liabilities.  There is an initial cost associated with fully funding retirement.  So the city of Davis will have to pay somewhere around $4.5 million a year over thirty years to eliminate the unfunded retirement health liability.

However, the advantage of such a system is then it becomes part of the collective bargaining process.  The city can then play that liability off future salaries and benefits.

Much the same way is the decision to fully fund pensions.  A government entity can continue to pay the employees’ share of the costs, but if the overall benefit cost goes up, that gets offset against future salary gains.  The employees through the bargaining process then get to choose between higher salaries or paying more into their pensions.  Either way, the unfunded liability decreases and the threat to the system declines.

Now from my perspective that at least covers the problems with the standard retirement pensions, 3% at 50 is another beast altogether and it should be noted that liabilities began outpacing assets at the very time most cities and governmental jurisdictions moved towards the public safety enhanced benefits of 3% at 50.  That along with skyrocketing salaries is threatening the entire system, and certainly at the local level.

That is going to require some more work to undo.