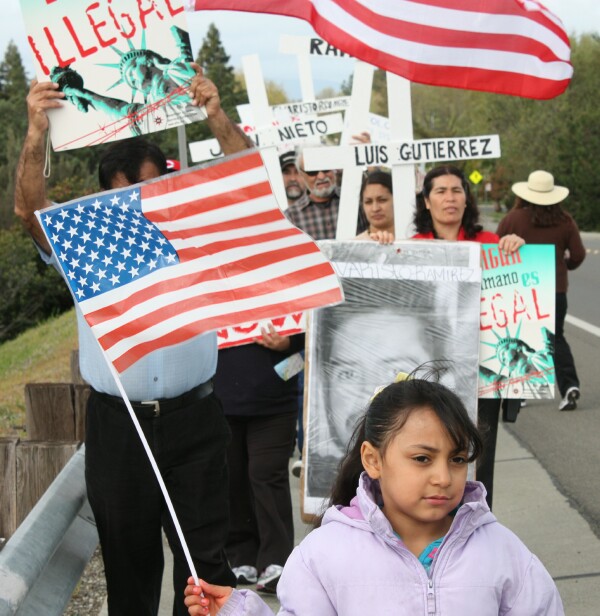 Protesters in Yolo County marched on Thursday and Friday in the first two legs of a three day planned march in honor of the late union organizer and civil rights leader Cesar Chavez.

The first stage of the marches was held in Woodland on Friday where demonstrators numbering approximately 50 gathered at 9:30 am at the Woodland DMV, the site from which Luis Gutierrez would embark on what turned out to be his last minutes of his life.  Soon after, he was contacted by Yolo County Sheriff’s as part of the Yolo County Gang Task Force, and as he fled, a confrontation ensued and he was shot and killed.

The March proceeded up to the Gum St overpass and then continued three miles.  The three day event was to draw attention to continued civil rights violations by the Yolo County District Attorney, and law enforcement departments in West Sacramento and Woodland necessitated the move to three days of marchers, said organizer Al Rojas, Sacramento Labor Council for Latin American Advancement (LCLAA) of Sacramento.

“Violations of our basic rights, the killings of Latinos by police, selective law enforcement and racial profiling. All are getting worse in Yolo County. It’s why we are marching three days now,” said Rojas, who said the theme of the march this year is “jobs, education, immigration reform, no guest workers and justice.” 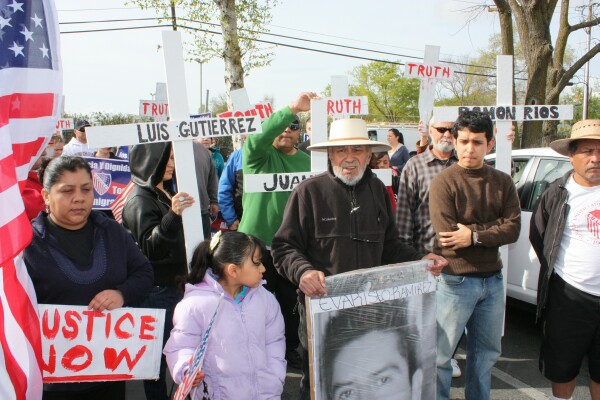 Prior to the march, Mr. Rojas addressed the small crowd and throng of reporters, mainly Sacramento television stations.

“We are here to highlight the overzealous prosecution by the District Attorney whose expenditures of his budget of $14 million constitutes 35 percent federal funds,” said Mr. Rojas who argued these funds “are being overzealously used and misused as far as we’re concerned in the enforcement and justification of the killing [of Luis Gutierrez] and the so-called validation of 1100 gang members allegedly in Yolo County.” 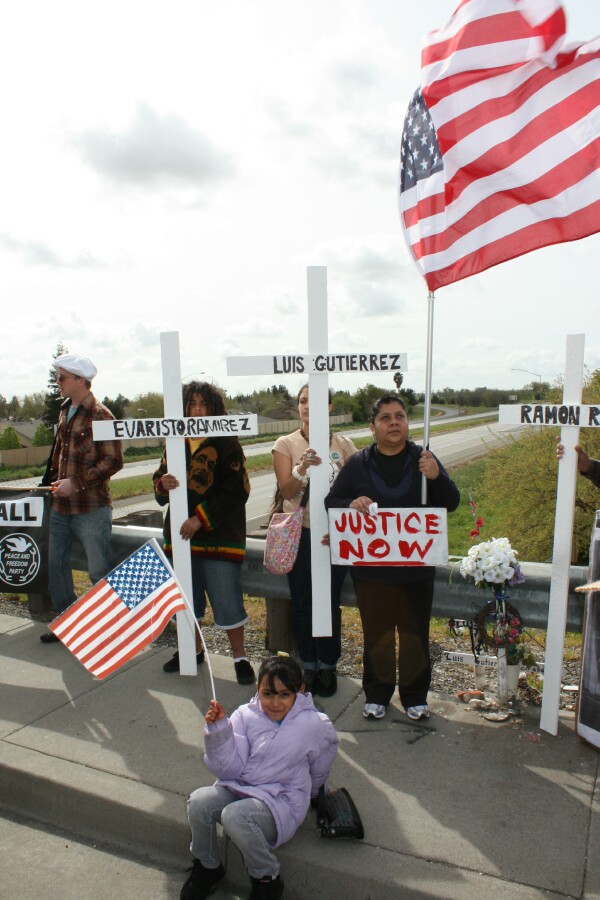 He continued his call for a federal investigation into the killing of Luis Gutierrez.  The Yolo County District Attorney’s office has said to have asked the FBI to independently investigate the killing of Gutierrez, however, as of one month ago, no witness that investigators for the Independent Human Rights Commission had spoken to had been contacted by the FBI.

“Today, we are here to focus on the death of Luis Gutierrez and draw attention to the questions that seems to be surfacing regarding the DA’s handling of the case,” Mr. Rojas said. “We believe that, if Cesar Chavez were around today, he would be at the forefront of this struggle.”

Earlier this week, the Vanguard issued a report calling into question the deputies account of the shooting in relation to where the bullet were found.  The investigation concluded that given the summary nature of the report, it is difficult to make a definitive conclusion as to whether the accounts of the officers are consistent with the location of the bullets. However, we have considerable questions about the veracity of official claims and request that the county release the full interviews, diagrams, and crime scene photos to the public, so that the public may analyze the reports for themselves.

Particularly troubling was a shot that ended up in a nearby trailer park, 700 feet from the crime scene, far to the northeast of the bridge.  Further analysis indicates that the trajectory of the shot was probably fairly high as it had to arc over other homes, suggesting perhaps that the shot was fired while the deputy was on the run.

At the same time, the Vanguard has investigated what is now being termed, a “cash for conviction” program in the DA’s Office.  Last week, Mr. Reisig told a group of people that between 30 and 35 percent of the DA’s Office is funded by grants which are used to investigate and prosecute different areas of crime.

The Vanguard has found evidence that a number of grants particular in gang prosecution and sex crime prosecution are predicated on the increase of arrests, prosecutions, and convictions.

For example for the Gang Violence Suppression Unit (GVS), the agency specifies:

“As a result of the specialized GVS unit, the agency must be able to increase the number of individuals identified as gang members and the number arrested for violent, gang-related crimes.”

The agency that receives this grant thus must be able to increase the number of identified gang members but also the number arrested for violent, gang-related crimes. 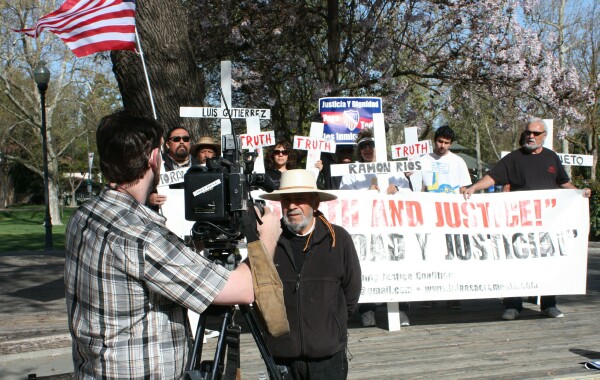 Does this give the DA’s office the incentive to try to attach gang enhancements to crimes?

Investigators went to great lengths to demonstrate that Mr. Gutierrez had gang ties, however, the best evidence was supposedly tattoos found on his hand and the testimony of one Rudolfo Flores who reportedly gave a statement to investigator and has apparently disappeared.  There is some indication that he may have been deported to Mexico the day after investigators spoke to him in early June 2009. 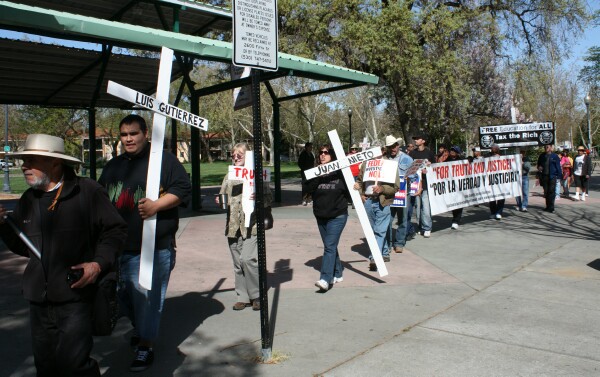 Marchers descended on Davis on Friday morning, in smaller numbers.  Organizers blamed the low turnouts in Woodland and Davis on the timing of the march conflicting with the work day and the fact that a bus that was supposed to bring so day workers in apparently broke down. 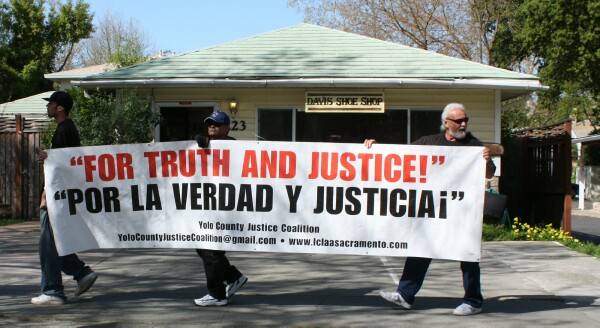 However, the march today in West Sacramento is expected to draw thousands according to a release this morning.

According to the release:

The massive march is not without controversy this year. West Sacramento police attempted to charge marchers up to $3,000 for a permit this year. March organizers refused to pay, setting up a possible confrontation between police Saturday at the beginning of the march.

Organizers had a similar problem in Woodland on Thursday, but Davis provided police service on Friday.