Yesterday we looked at the new Measure J arguments and impartial analysis including the ballot argument against Measure R (2010’s Measure J).  Today we will examine the sales tax measure.

As we have previously argued, back in 2004 when the original half-cent sales tax measure was proposed, the city had told the public that this measure would ensure continued city services and it looked at a variety of expansions of city services.  The city argued at the time that without passage of this measure, there would be a huge cutback in the provision of services.

The reality however is that the $3 million in revenue generated from the measure, largely went to pay for exploding employee compensation.  Now as the city looks to re-up the measure, we have a very different environment, government services at all levels are being cutback, and voters will have to weigh whether municipal services warrant the additional revenue more than perhaps either schools or county level services that go to provide health care and other support for the indigent.

To help us in that view is a preliminary look at the budget for 2010-11 without renewal of the sales tax.  Now as it turns out, because the sales tax goes until the end of the calendar year of 2010, the city can ease into the $3 million in cuts.  Nevertheless, here is the possible plans for accommodating such cuts. 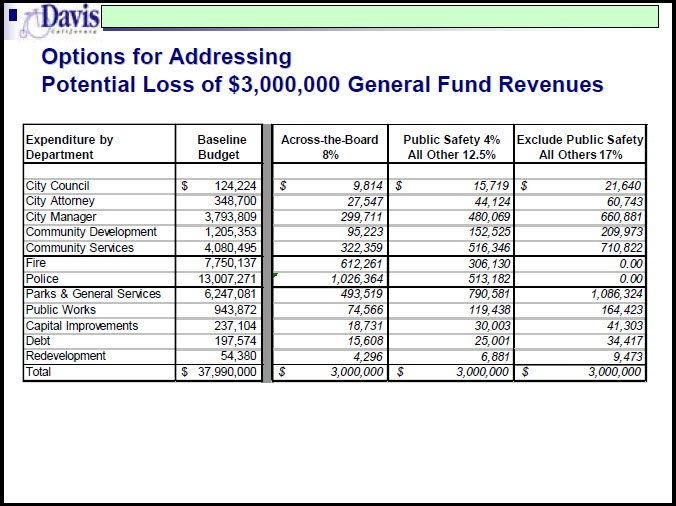 The three scenarios include an across-the-board 8% cut, a public safety cut of 4% with everything else being cut 12.5% and a 17% for non-safety with no cuts for public safety.

In our views, these type of cuts miss a lot of the points.  First, as we see with the parks reorganization, the city may be able to restructure the provision of services to be more cost effective.  Second, unless the city wants to re-open its already failed employee bargaining, the city will end up cutting services and probably employees while leaving the high levels of employee compensation in place.

It is for this reason, that the city has largely missed its window to get spending in line, and further cuts are going to come directly out of city services.  Nevertheless, the belief is there that facing layoffs, the employee groups, may decide to opt to re-open negotiations.  In our view that is probably a long shot.

And so what we have seen is that increased revenue has equaled higher amount of employee compensation, but decreased revenue means lower levels of services.  This is a very poor deal for the taxpayer who paid more to get the same amount of city services and now will be getting far less as the system struggles to reach some sort of equilibrium.

With that in mind, here are the ballot arguments for Measure Q, the half-cent sales tax measure.

The argument for the sales tax was signed by four of the five councilmembers, Lamar Heystek did not sign the statement, and Johannes Troost, the Chair of the Finance & Budget Commission.

They argue that this tax has helped fund services that define our community:

“Revenue from this modest tax provides approximately 3 million dollars a year for essential city services. Even with this tax in place, Davis faces substantial service cuts. Without it, the service cuts will be extreme.”

What they do not say is that the tax did not go to fund anything other than employee salary increases.

Since the passage of the sales tax measure in 2004, the city used all of the increase from the sales tax plus additional revenue from the real estate bubble to finance increases in employee salary without increasing provisions.

The argument against the sales tax hits on a few of the key points, but does not bring enough of the points home to those who not been engaged in the debate.

At times, the argument makes little sense even for someone who agrees on the bottom line.

“Many businesses in Davis have recently been forced to close because excessive rent and property taxes have become unaffordable.”

This may be true, but the sales tax has been in place for nearly six years and it is not one of the reasons that businesses in Davis have closed.  The economy is a primary problem, the excessive rents are also crucial.

The argument goes on to say:

“Meanwhile, the city is wrapped up in a major financial scandal, where some public employees are receiving salaries in excess of $100,000 per year, including promotions for higher pay.”

The word “scandal” is misplaced here.  The argument should say that the city is facing fiscal crisis, and while some public employees are receiving salaries in excess of $100,000 per year, the real problems lie with retirement benefits including health and pensions.

I do agree that the city talks about the need for essential services and has in the past, however, they needed to hammer home the point that when this measure was placed on the ballot, they talked about maintaining and expanding specific services and instead the measure went to employee compensation increases.

“Residents should not fork over additional money to a city government that has not kept its financial house in order.”

Unfortunately, they have failed to make the case to the public that the city government has not kept its fiscal house in order.  They assume people know, but they do not.  The average person in this town has no idea what looms down the road in unfunded liabilities and pension hits and unfortunately this argument does not mention either one of them.

“If Measure Q passes, businesses most undermined will be smaller retailers.”

I think this is a very minor impact at best.  We are talking half a cent on the dollar, which is 50 cents for every $100 dollars spent or $5 for every $1000 spent.  I do not believe that this amount is going to undermine businesses, or that making it go away will provide any kind of boost to them.

In the final argument, they make the point that “it is now time to prioritize where tax revenues will go” and I agree with that point, unfortunately that could have been their opening statement and then they could talk about the problems that the schools are facing, the problems at the county and the social service cuts, and then ask if we really need to fund luxuries such as parks and recreation during times of fiscal crisis.

As I said at the outset, they hit on some of the points, but the failure to explain them means that the argument will not resonate with a general public in Davis that is inclined to support tax measures unless given a real reason not to.

I would also note that in the impartial ballot analysis, the vote required a two-thirds vote on the part of City Council to place this tax measure on the ballot.  Councilmember Lamar Heystek was the lone hold out as he had hoped to have used it as leverage to get the city council to drive tougher negotiations for the new employee contracts, had he had a second vote, he could have blocked the measure and really forced the hand of the council majority.  Unfortunately, no one stepped up to use one of the few powers the council minority has in Davis.

ARGUMENT IN FAVOR OF MEASURE Q:

Measure Q is a simple renewal of our community’s one-half cent sales tax. This tax, which has been in effect for six years, helps fund services that define our community:

Revenue from this modest tax provides approximately 3 million dollars a year for essential city services. Even with this tax in place, Davis faces substantial service cuts. Without it, the service cuts will be extreme.

The current recession has caused a steep decline in local revenues, and coupled with the state’s ongoing shift of property tax revenues away from the city, it is more crucial than ever that we protect local funding for essential city services.

Please help protect the quality of life in Davis that we all enjoy. Please join us in voting yes on Measure Q.

For more information: www.yesonq.net. Thank you.

In the greatest economic downturns since the great depression it is not the time to be renewing existing tax increases. Many businesses in Davis have recently been forced to close because excessive rent and property taxes have become unaffordable. In 1998, there were five (5) property tax assessments; now there are ten (l0) due to ballot measures that were passed for a wide variety of local government bureaucracies in recent years. Water and sewage fees for residents are expected to double. Student fees are going to rise 32% at V.C. Davis. Recently, the Board of Supervisors announced possible plans for a second half-cent sales tax increase which could result in even further tax hikes.

Meanwhile, the city is wrapped up in a major financial scandal, where some public employees are receiving salaries in excess of $100,000 per year, including promotions for higher pay. Yet, the city talks about the need for “essential services” as a justification for tax-hike renewals. Residents should not fork over additional money to a city government that has not kept its financial house in order.

If Measure Q passes, businesses most undermined will be smaller retailers. Because non-taxable items such as unprepared foods and medicines are largely the stock of larger retailers, they would not be placed at a competitive disadvange by the sales tax renewal to the extent of smaller retailers whom sell mostly sales taxable items.

As the old adage goes, “you cannot get blood out of a turnip.” In this lagging economy with pay cuts, furloughs, or citizens laid-off, it is now time to prioritize where tax revenues will go. The city should respect the fact that Davis residents do not have bottomless pockets. Please consider voting no on Measure Q.

For more information, please visit our website at: http://www.yvm.netlvme/no-on-q

California Revenue and Taxation Code sections 7285.9 and 7290 authorize the City to levy a transactions and use tax (sales tax) in quarter cent (1/4 cent) increments (generally up to a maximum of 2%) so long as the tax is approved by two-third’s of the members of the City Council and by a majority of the voters voting in an election on that issue.

The 12 cent sales tax re-authorization and extension set forth in Measure Q would sunset and be repealed on December 31, 2016 and could not be collected after that time unless two third’s of the City Council place an extension or re-authorization of the tax on the ballot and a majority of the voters voting in an election approve it.

Share:
Previous : What the Sphere of Influence Means For Davis Growth
Next : Plea Agreement in Taxi Cab Attack Remains in Place