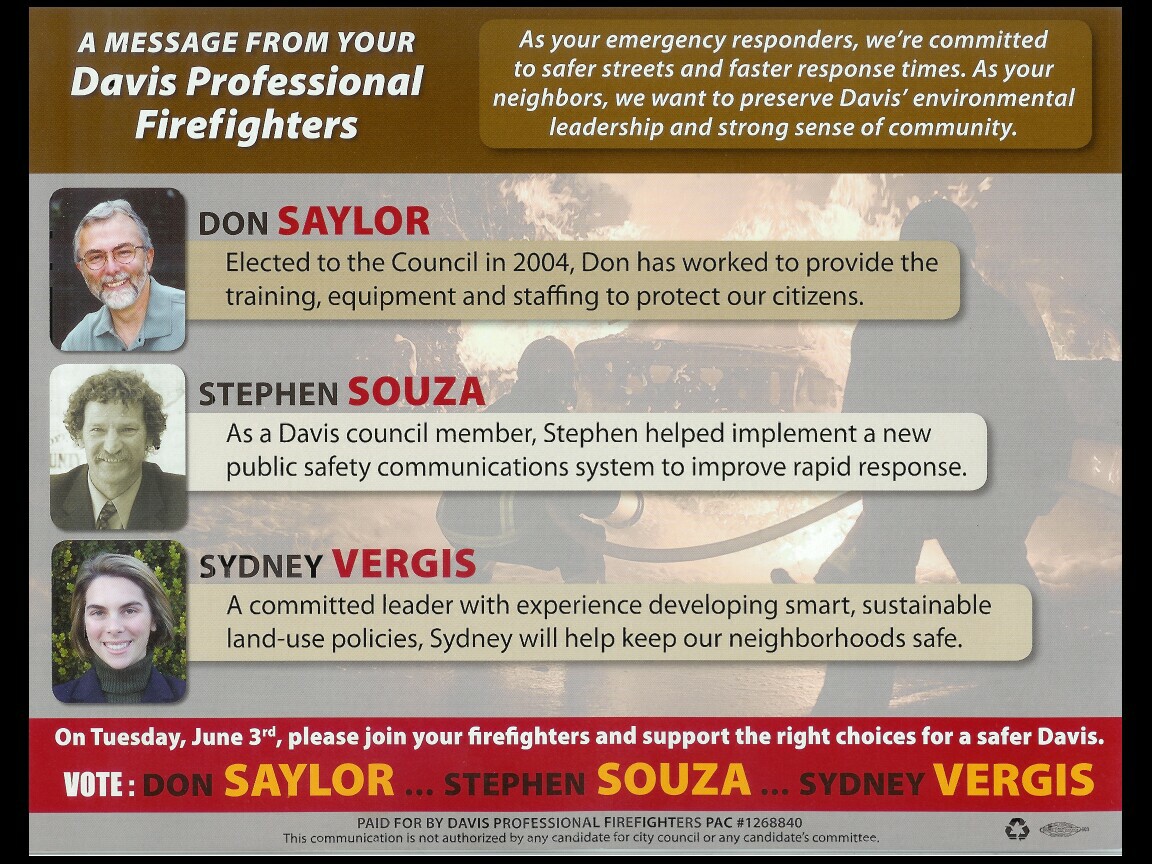 There is one huge question facing the city of Davis.  It is not the issue of growth, which while important in this election has largely been focused on the question as to whether Measure J (in the form of Measure R) gets renewed.

No the biggest issue is that of the fiscal health of the city and it will define the entire course of the election.  The question question is who will take firefighter money?

If you want the full story on firefighter money, go here.

But understand these basics and it is not, contrary to popular opinion that I do not like the firefighters, that I think they do not do a good job and serve a vital function in society.  It is simply a matter of money and political influence.

Toward the end, in the last election they gave their three endorsed candidates over $20 thousand in direct contributions and independent expenditures.  Since 2000, they have contributed $41,752 to their preferred candidates.  The next closest public employee group was the police and they gave $8900 over that time.

What do they get for their money?  Well for starters of the last nine candidates they endorsed, seven have won.  That’s a pretty good batting average.  And there is a policy component to it.  Right now, firefighters in comparable positions make 20 to 25 percent more than their police counterparts.  In the previous MOU, the firefighters got a 36% salary increase compared to just 16% (barely over inflation) for the police.

It is that MOU vote that really hurts Davis.  We saw it the last week.  Back in June 2009, the city had targeted a $1.25 million savings from new employee contracts to cut into a $3.5 million deficit.  However, when the MOUs came out late and far short, just the opposite occurred, the city faced an additional $800,000 short fall.

Now because of that failure, to bridge the gap in this current fiscal year, the city has dipped into its reserves.  Next year, the city will again need to plug that gap because they have an additional $1 million structural deficit, primarily because of the failure of the  unfordable MOUs that they have to plug.

The result is that they are doing major re-organization, getting rid of the parks department for one thing.  But the real savings comes from the 20 positions the city is eliminating, four of which are filled currently.  That brings the number to 35, the number of positions that the city is eliminating, all because of the explosion of employee salaries and retirement benefits and most recently because of the failure of the current bargaining talks to yield enough in savings to balance the budget.

Those are city services that are disappearing and people working permanently with short staffs.  It is a major negative impact on municipal government, mostly because of the influence of a small number of firefighters, who join together each year to each give $100 to all of their preferred candidates – something no one else does in this city.

So who are their people this time?  We know that Joe Krovoza has said he will not take the money from public employees and apparently will not seek the endorsement of the firefighters.  Rochelle Swanson to this point has not made a public declaration, but there is a decent chance she will not seek their endorsement either.

At this point, there is but one candidate that will likely seek their endorsement.  That is Sydney Vergis who took $3800 from 38 firefighters in 2008 and also received an independent expenditure share of $2666.67 for a total of $6466.67.  To put that number into perspective, to date, she has barely raised that total amount of money on her own.

Do you not think that is influential?  The following is what Ms. Vergis’  financial disclosure looked like in 2008.  Notice that the firefighters gave all their money at the same time.  (That’s not all of them, the contributions started on the previous page, trust me, $3800.). 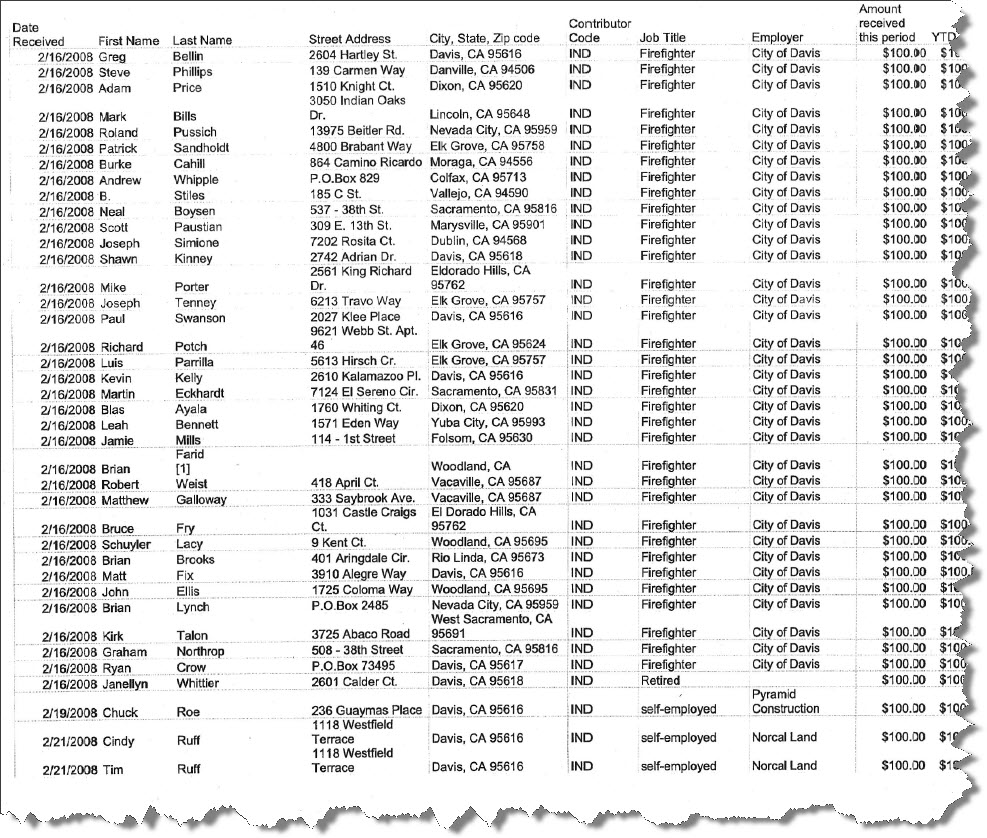 I mean who can say no to that pressure?  That’s pass the hat time right there, all on the same day.  Must have been some kind of accident that they all just happened to give her $100 on February 16, 2008, right?

But if indeed Rochelle Swanson refuses to seek an endorsement, the people of Davis will have a clear choice and two people that they can trust to stand up to the special interests and fight for fiscal responsibility.  Actually come to think of it, it will be four people on the ballot not beholden to special interests.  It is all on the line right now, the future of Davis may be at stake.

4 thoughts on “How Do We Distinguish Between the Candidates? Follow the Money”