According to the Legislative Analyst’s Office (LAO) report that we released this year, showing state spending at a record low while the recession is the primary cause of California’s Budget deficit.  In addition, the California Budget Project’s report shows a huge growth, not surprisingly in state spending on corrections over the past two decades.

According to the Department of Finance, state spending per $100 of personal income is at its lowest level in nearly 40 years.  Under the Governor’s May Revision, General Fund spending, adjusted for inflation would at the lowest per capita level since 1993-94.  And as a percentage of personal income, state spending in 09/10 is at its lowest level in more than a decade.

The LAO concludes that the recession, rather than spending is the primary cause of California’s budget deficit.  According to their report, more than half of California’s General Fund revenue is derived from personal income taxes.  Over the last 40 years, the percentage of General Fund revenue from personal income taxes has increased from 28 percent to 52 percent. 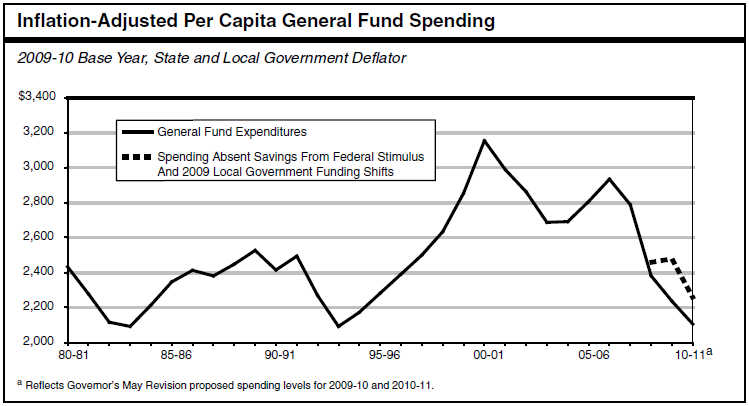 Since 2006, personal income growth has steadily fallen; and in 2009, personal income shrunk for the first time in the post-World War II era.  Wage and salary employment is expected to stay negative through 2010.

We have spent a good amount of time analyzing the city of Davis’ budget situation and focused heavily on city employees who draw on roughly 71% of the general fund spending. 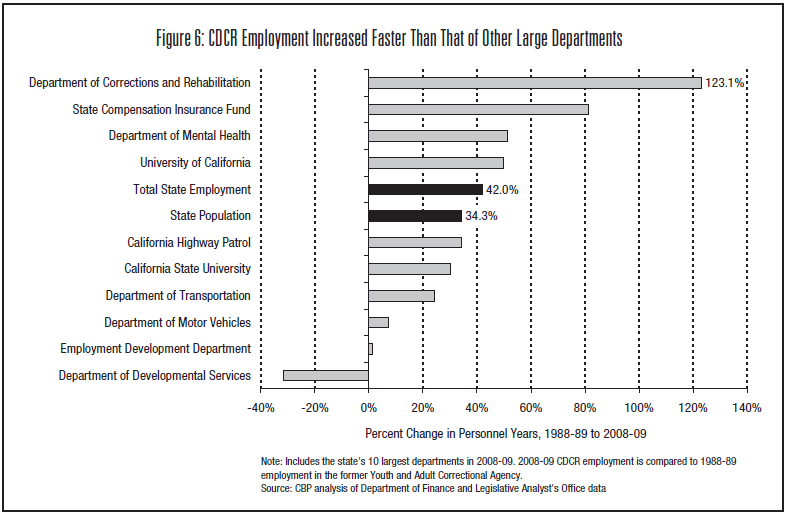 The culprit in the last twenty years for growth in the government sector is corrections.  The Department of Corrections and Rehabilitation (CDCR) is now the second-larger state employer, employing one out of six state workers (17.4).  Not only did CDCR go from the third-largest department in 1988-89 to the second-largest in 2008-09, but it grew at four times the rate of the rest of the state employment over the same period – 123.1 percent compared to 31.2 percent. 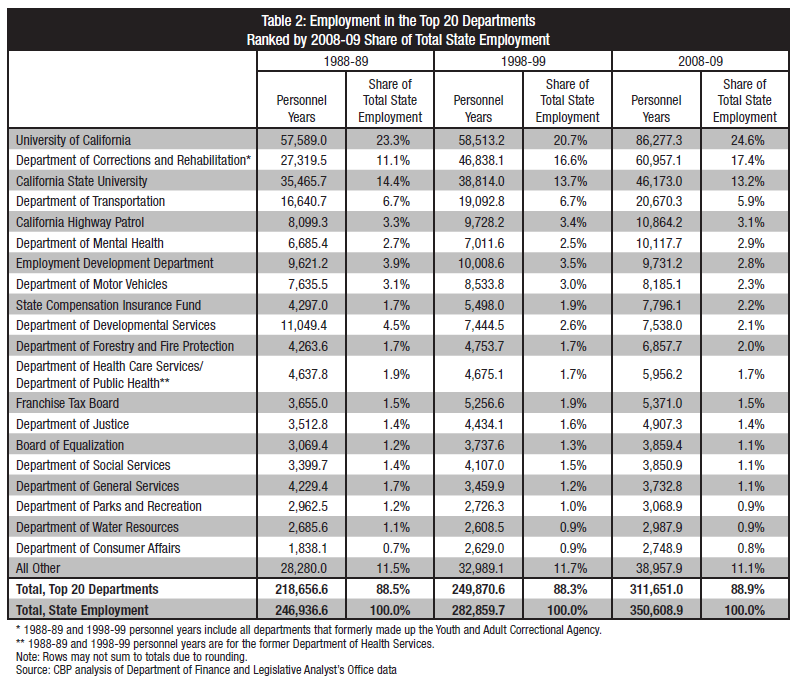 In another discussion, it will be helpful to show the impact of the powerful CCPOA in terms of the increase not only salaries for correctional peace officers, but also in the rise of mandatory sentencing laws which have forced jail populations to soar and with them, the spending on the department of corrections.

For our purposes here, it suffices us to point that when most people think of state employees, they are probably not thinking of UC Professors and prison guards, but that is the bulk state spending on employees.

However, it is also worth noting that California actually rates near the bottom in terms of state government employees per capita.  The most recent available figures are only from 2008, but suffice it to say things have if anything declined further since then, California had 108 state government employees per 10,000 people living in the state, that ranked 48th and the average of 149.

Moreover, California ranked 41 in state and local government employees per 10,000 people living in the state, at 505 compared to the national average of 553.

Now this does not break down the spending compared to the rest of the nation, but in terms of size of Government California is far from the top.