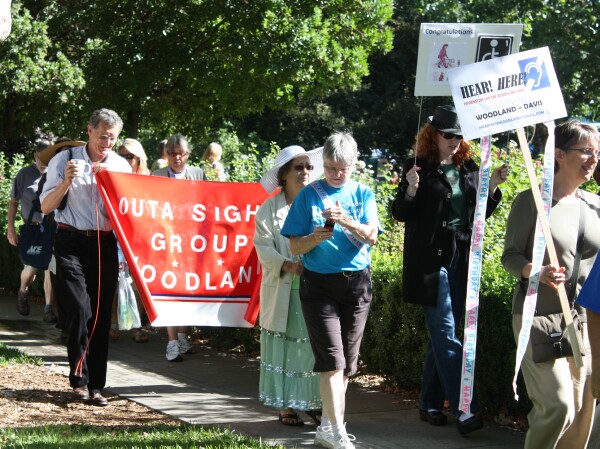 On Saturday, over 100 people gathered in Davis’ Central Park to celebration the 20th anniversary of the passage of the Americans with Disabilities Act.  Organizers say they hope to “strengthen the pride, power and unity of people with disabilities, our families and allies” and “challenge the way many people think about and define ‘disability.’ ”

The lively group marched on the sidewalk around the park and then gathered at the Rotary Stage for speakers and performers. 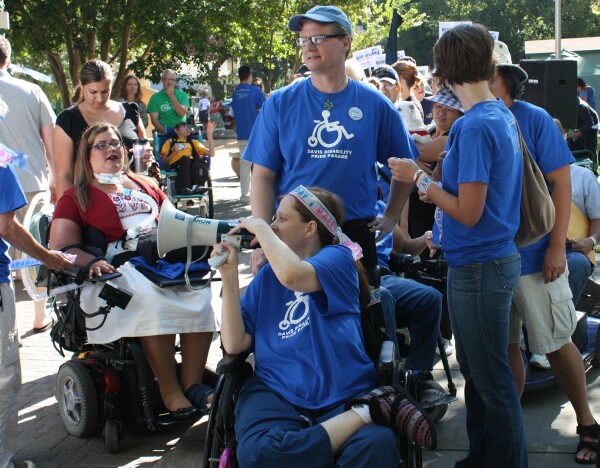 Natalie Wormeli, the President of the Yolo County ACLU Chapter, told the crowd, “Twenty years ago things started changing, they haven’t fixed everything yet, but look at us come on.”  She continued, “We have more work ahead of us, but now we’re going to celebrate.”

Will Arnold, the other co-emcee of the event said that he was only ten when the ADA was passed, and he has benefited for most of his life from the law that allows for equal accommodations and access for those people with disabilities. 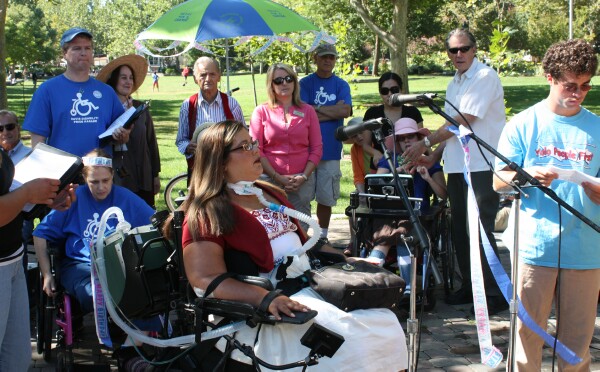 Sara Granda is a local Davis resident.  She graduated from Davis High School and UC Davis and will serve as grand marshall for the parade.  Paralyzed from the neck down after a car accident in 1997, Ms. Granda made headlines last year during her successful fight to take the bar exam. She has since been appointed special assistant to the chief counsel for the State Department of Health Care Services.

“Thank you so much for asking me to come and be the Grand Marshall, I am really honored as a lifelong resident of Davis and a disabled person,” Sara Granda told the crowd.

“This last Monday marked the 20-year anniversary of the signing of the American Disabilities Act, the ADA of 1990.  The ADA, as it is termed along with the Rehab Act of 1973,” she continued, “along with other legislation has brought persons with disabilities from a once largely invisible and unaccountable population, both socially and physically isolated by society in nursing homes, asylums, homeless shelters to fast forward 30, 40 years where the population of persons with disabilities are living longer, uninstitutionalized and  barrier-free lives side-by-side with their able-bodied counterparts.”

“Despite significant changes provided people with disabilities, there is still need for greater independence and opportunities for greater participation in American life.   Other than the ADA, and its predecessors, federal legislation, medical advances, and developments in assistive technology, changes in public attitude have followed slowly and primarily in response to educational efforts that have accompanied news laws,” Ms. Granda continued.

“People with disabilities have emerged as a minority group, not oppressed by their disabilities but by circumstances that can be changed through legislation and political action.  The only premise of oppression, though, of a minority group is the assumption of biological and social inferiority by the majority,” she said.  “While in places like Davis we believe, and at least hope, ourselves to be different, the sad reality is that persons with disabilities, even here in the west, still suffer from grave, sometimes subtle, backhanded, covert and overt discrimination.”

“For public policy changes to be effective, the attitudes that lead to the marginalization of people with disabilities must be addressed equally along with functional changes in the physical environment,” she added. 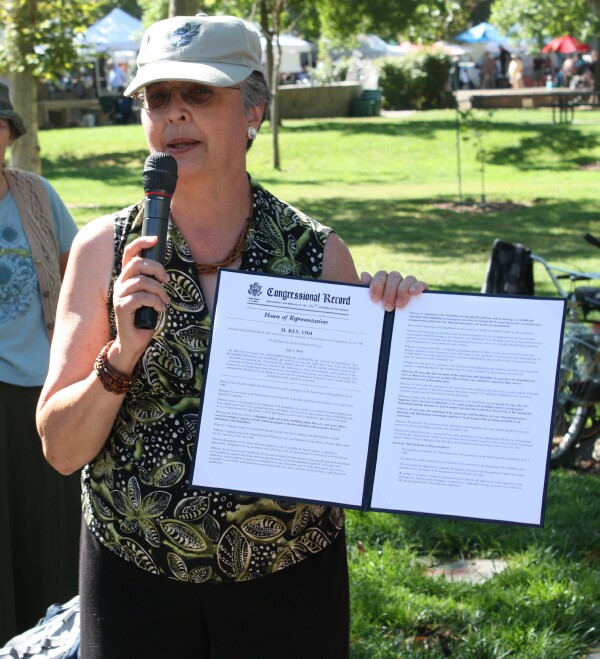 Congressman Mike Thompson was originally planning to attend the event to thank all the activists who helped bring about universal access.  He had to cancel at the last moment and so Elly Fairclough from his office read a proclamation to the crowd.  “July 26, 2010 marks the 20th anniversary of the enactment of the Americans with Disabilities Act of 1990,” she read from the proclamation.  “The Americans with Disabilities Act has been one of the most significant and effective civil rights laws passed by congress.”

“Prior to the passage of the Americans with Disabilities Act, people with disabilities faced significantly lower employment rates, lower graduation rates, and higher rates of poverty than people without disabilities and were too often denied the opportunity to participate in society due to intolerance and unfair stereotypes,” she read from the proclamation. 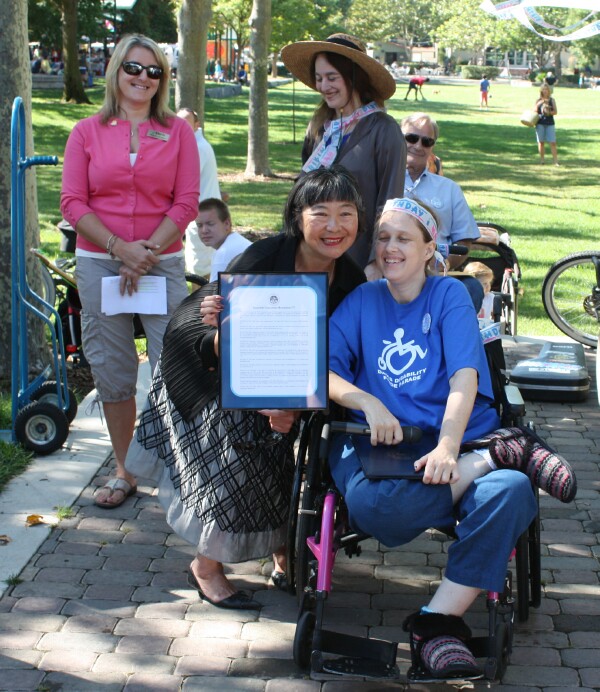 Assemblymember Mariko Yamada spoke as well.  “I look at disability rights as just another part of civil rights.  It is no different and should take no less importance and no less emphasis, weight or priority amongst all the issues that face all of us on a daily basis, whether we are serving elective office or just being community activists,” she said.

Assemblymember Yamada introduced Assembly Concurrent Resolution (ACR) 177 recognizing July 26th as the 20th Anniversary of the federal American’s with Disabilities Act. “Working together, we are going to make improvements for all of us,” she concluded. 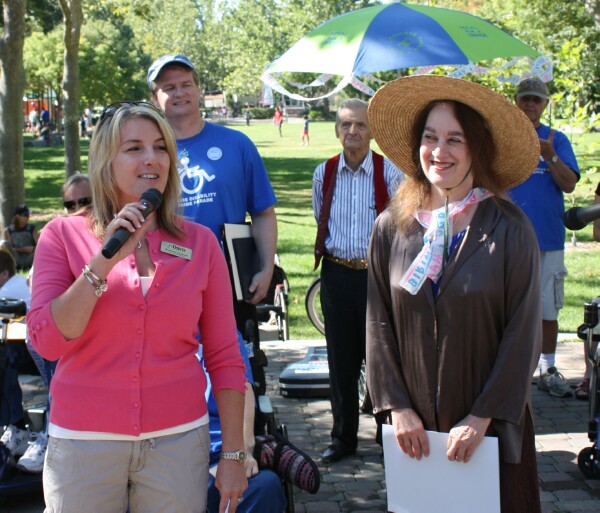 From the Davis City Council, Sue Greenwald and Rochelle Swanson represented the city of Davis.  Councilmember Greenwald read from the proclamation.  “On July 26, 1990, President George H. Bush signed into law the Americans with Disabilities Act (ADA) to ensure the civil rights of people with disabilities,” she read.  “This legislation established a clear and comprehensive national mandate for the elimination of discrimination against individuals with disabilities.”

“The full promise of the ADA will only be reached if public entities remain committed in their efforts to fully implement the ADA,” she read.

Rochelle Swanson said, “Earlier this month we celebrated the 234th anniversary of our country’s independence, and I see this as a different kind of independence.  Twenty years ago, with the passage of the Americans with Disabilities Act, it was a big step forward for people being able to live more independently and for full inclusion within our community.”

“While 20 years ago it was put into law and signed by George H. Bush, in Davis we have, for over 35 years, been working towards moving forward toward full inclusion.  City staff over 35 years ago was already working on the 1973 Rehabilitation Act, which worked on removing architectural barriers.  Just last fiscal year we spent over $800,000 just removing these barriers so that people can be free and mobile throughout all of Davis.  Not just the parts that are downtown or the parts that are public buildings,” she said.  “I think we should all be very proud of that.” 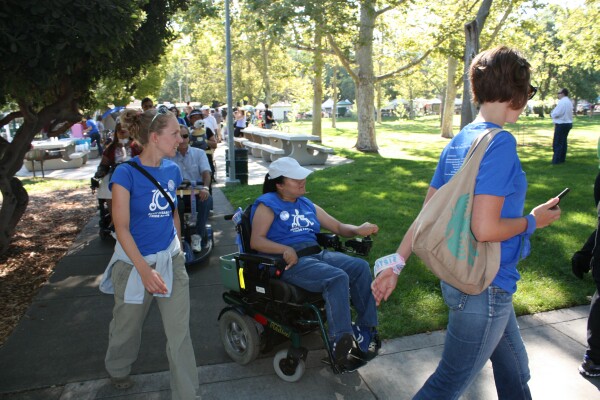 Share:
Previous : Judge Rosenberg Fights to Preserve Judicial Slush Fund
Next : Yolo County Won’t Be the Ones Saving the Kings