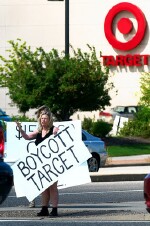 When the city of Davis decided to seek a new source of revenue, it tapped Target as a goal.  Never mind that Target had almost as bad a labor reputation as Wal Mart.  Never mind that they had been cited for numerous labor violations.  And never mind they had utilized sweatshops in third world countries.  Someone in the Davis leadership thought if they strapped on some green, Target would fit Davis’ community values.

Well, now that will really be put to a test.  Progressives across the country have called for a boycott of the Target Corporation after revelations that the company donated $150,000 to a group that is running ads backing conservative Republican gubernatorial candidate Tom Emmer, who opposes same-sex marriage.  Conservatives, you can stop reading now, and post your dissent.

Groups such as this Facebook Group, Boycott Target Until They Cease Funding Anti-Gay Politics have sprung up all over.

“Target, practically everyone’s favorite discount retail store, is headquartered in Minnesota, the land of 10,000 lakes. But along with precious bodies of water, Minnesota is home to some pretty rabid anti-gay politicians and groups. Among them include Tom Emmer. And Target, it seems, is apparently filling his campaign coffers with nearly $150,000.

Follow the money. At least, that’s the message delivered by an article at sfist.com by Matt Baume, who tracks $150,000 from Target’s coffers, through a political action committee (PAC) known as Minnesota Forward, all the way to Tom Emmer, who himself supports a Christian rock band in Minnesota that travels around the state saying that it’s moral and righteous for religious people to kill gays and lesbians.

For those into algebra, it looks a little like this: Target + Minnesota Forward + Tom Emmer = Support for a rather dangerous and radical political philosophy that diminishes LGBT people to pests that should be murdered. And Target is cool with this?

Send the company a message right now, urging them to explain why their money is being used to fund a politics that not only serves to prevent LGBT equality, but breeds homophobia, transphobia and hatred.”

Over 240,000 people have signed a petition promising a boycott, and hundreds of gay-rights supports demonstrated outside of Target stores on Friday.

Target has, of course, defended it’s support for the LGBT community, arguing that its support for Mr. Emmer has to do with his fiscal positions, not his stance on social issues.

“Target’s support of the LGBT community is unwavering, and inclusiveness remains a core value of our company,” Chief Executive Officer Gregg Steinhafel said.  The company argues that its political action committee has split its donations evenly between the parties this year.

However, that was not enough.  Mr. Steinhafel had to apologize to his employees the day before the protests.  “The intent of our political contribution to MN Forward was to support economic growth and job creation,” he wrote. “While I firmly believe that a business climate conducive to growth is critical to our future, I realize our decision affected many of you in a way I did not anticipate, and for that I am genuinely sorry.”

Target declined to address the question of whether it would withdraw the donation.

Mr. Emmer supports a constitutional amendment protecting “traditional marriage.”  In an ad on his website he states, “I believe marriage is the union between one man and one woman.”

“As a legislator, I have consistently supported the constitutional marriage amendment that protects traditional marriage,” he adds.

Those who might be worried that a new Supreme Court decision that allows corporate entities to directly pay for ads supporting or opposing candidates ought to take note.  There is a real danger to companies for getting too far involved in campaign.

“It’s harder to get corporations to do this than a lot of people thought it was going to be,” said Vin Weber, a former Republican lawmaker from Minnesota who is now a lobbyist and political consultant. “People think that most businesses are Republican, but by and large, companies don’t think that it makes much of a difference which political party controls Washington.”

On a local level, of course, it will be interesting to see how a city with the reputation of Davis responds to such a boycott.  Will people continue to shop at Davis’ Target store out of convenience or will sales decline?  The city is counting on $600,000 in new revenue from Target to help stay afloat during a deep recessions and a shallow recovery.

The $600,000 revenue projection always seemed like an optimistic figure, even before the economic woes hit the region.  Now that figure will be even more stressed by Davis’ progressive core.

On the other hand, it is quite possible that the people who are most likely to boycott a Target based on this activity, are the same people least likely to shop there to begin with.

The bigger importance is probably that fewer companies will be willing to dip into potentially polarizing political campaigns.  If they truly do not see a clear difference between the candidates, then they ought to be very careful which campaigns to fund.

Share:
Previous : Battle Lines Drawn on Water: Peripheral Canal, Governance and Financing Highlight State Water and Delta Hearings
Next : No Celebrating in Sacramento The Passage of the Earliest Budget in Years