While I appreciate his highlighting the contributions of Dan Chmielewski and myself to the debate with Steven Greenhut and Supervisor John Moorlach, I do have to take issue with the way he presented some of my comments, including the attribution of some statements out of context.

In his commentary Moxley writes:

“The battle is sure to remain intense because the LiberalOC blog’s Chris Prevatt (who is also a county union official) isn’t willing to concede that government pensions is a topic for public debate. He even says that specific retiree benefits-like the ones causing so much outrage-should be secret, and he has blasted inquisitive reporters.”

First, to claim that I feel that government pensions are not a topic for public debate is not accurate. I believe that the public does have a role in participating in debate over public employee pensions. That is accomplished through the election of officials to manage our government. The public is entitled to know what benefits have been negotiated, and in Orange County the voters even approved a county ballot initiative that requires a vote of the public to increases public employee pension benefits. In fact, the Orange County Employee’s Association (OCEA) spent no time or effort opposing that initiative. In a July 14th OC Register Guest Commentary OCEA General Manager Nick Berardino pointed out that OCEA has saved the taxpayers millions:

Moxley went on to attribute the following quote from me incorrectly as though it was a justification for not revealing actual pension payouts.

“It is not the job of individual taxpayers to evaluate the performance of public employees.”

Moxley’s misapplication of my comment resulted in the following from Greenhut:

“How arrogant to want to further shut down public records,” responds Greenhut, who can’t hide his contempt that union leaders want “a shield from accountability.”

From his view, “Taxpayers have every right and duty to be concerned. Actually, Prevatt’s ‘It’s none of your business; we know best’ attitude epitomizes the core thesis of my book. The public servants have become the public’s masters. It’s time for the public to remind the government-employee class that it is supposed to work for us.”

My objection was over where the line between the public right to know crosses over the right to some level of privacy. Pensions are not as claimed in the OC Register investigation I was commenting on, “paid by the taxpayer.” Pensions are paid by the employer, in this case public agencies, and the employees. Even if the employer picks up 100% of the employee share of retirement contributions, it is the employee’s contribution and was negotiated by those employees as part of their regular compensation when they were employees. The only interest the public has is in what compensation, including benefits, an active employee is being paid. Unfortunately, the state courts have ruled differently, so that “point” is moot.

The resulting revelation of pension benefits for County retirees has proven what I and union officials have been saying all along. The rank and file employees do not receive excessive or bloated pension benefits. In fact, senior executives are the people getting bloated pension payouts. These managers contribute nothing to the employee share of their pension benefits, and they get the highest payouts. And even with the excessive retirement payouts for managers factored in, the average annual payout for General Members in the entire OCERS system was $30,108 in 2009 (Fig. 1). 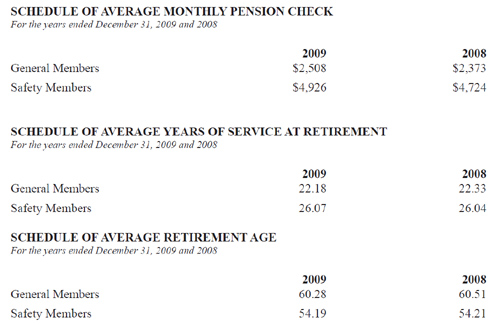 My comment, taken in context, was related to the overall debate about how much of a role the general public has in the details of in the administration of government functions. My point was simply that a municipality cannot be effectively or efficiently managed directly by each resident individually. In the case of the County of Orange, we elect a Board of Supervisors and task them with the responsibility to hire and supervise managers to run the nuts and bolts of county government functions. That is what I meant when I wrote “It is not the job of individual taxpayers to evaluate the performance of public employees.”

Far from objecting to accountability, union leaders have been on the forefront of calling for management accountability. What union officials and I object to is the abuse of public information requests for the purpose of distorting the image of public employees. Given the way Greenhut and Moorlach have distorted facts, I think there is a valid cause for concern.

“The public increasingly understands the level of plundering that has gone on, as public employees have used their union power to gain an unsustainable level of pay and especially benefits,” he says. “People are starting to understand that this is an issue of fairness. It’s not fair to create a society in which those who are supposed to serve the public get to live much better than the rest of us.”

Greenhut here is using the excessive salaries of government executive managers to portray ALL public employees as being overpaid and living better than the “rest of us.” I am not sure when Steven Greenhut became a member of the down-trodden working class, but I am pretty sure he “earns” significantly more than the average county worker while sitting on his tail pontificating about public employees living high on the hog. I am having a difficult time figuring out who he is referring to when he uses the phrase “rest of us.” County workers do earn more than the average salaries of the general population. But when those salaries are compared to salaries of similar private sector professions, public employees – for the most part – earn less than their private sector counterparts.

“The voters have seen public sector greed (thank you, city of Bell), and they have had enough,” wrote Moorlach, who says it’s time for a voter referendum against “Rolls-Royce” public pension plans.

Again, we have another example of how hypocrites like Moorlach – who will benefit from the same county pension plan I will while also taking home an additional 8% of his salary in a 401(k) style defined contribution plan – tailor their rhetoric to raise public ire against public employees. He, like all county executives and managers, doesn’t pay any of the employee normal costs towards his pension benefits, and doesn’t pay for the 401(k) style pension program (Managers and elected officials do contribute a small percentage to cover the pension enhancements of 2005).

Moorlach and Greenhut incorrectly portray “unfunded pension liabilities” as some looming catastrophe hanging over our heads ready to crush our government services into oblivion as well as taxpayers into financial ruin. That is simply not the case.

Unfunded pension liabilities have existed before (Fig. 2), and they will exist in the future. In a cyclical manner, unfunded pension liabilities will rise and fall with economic conditions. Greenhut and Moorlach would have us believe that a fully funded pension plan is required for fiscal solvency and financial stability. This is not the case as public employee pension funding ratios have grown and declined over time. Funding levels were as low as 50% in the 1970s, 80% in the 1980s, and only reached 100% in the mid- 1990s after stock market returns averaged 28% per year. 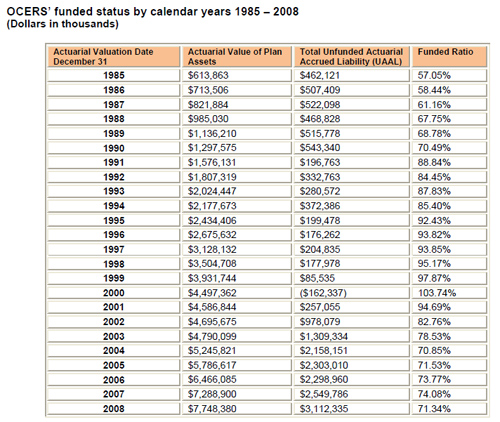 Unfunded liabilities are not, as Steven Greenhut would have us believe, like credit card debt. Credit Card debt is based upon unsecured debt; public employee pensions are not. Pension debt is more akin to a home mortgage. You have a liability secured by some cash and a projected market value of an asset if sold. You do not have a responsibility to pay that debt in full unless you sell the home (cash out).

While lower than average pension funding levels are not equivalent to insolvency, they are certainly important and should be addressed to prevent further erosion of pension reserves. Full funding is an ideal goal, but not required to maintain stable pension reserves. OCERS’ independent actuary, Segal, Inc. performed an actuarial valuation as of December 31, 2009 and determined that OCERS’ funding ratio of actuarial assets to the actuarial accrued liability is 68.77%, which decreased from the prior year’s funded status of 71.34%. (See Letter of Transmittal, page 3 of CAFR).

The Orange County Employee’s Association, representing the vast majority of employees in the County retirement system, has taken the lead in offering innovative solutions that help relieve future county costs while protecting existing benefits. Government workers are willing to be part of the solution, but they are not the only participants in this process. Management needs to step up to the plate and start paying a portion of their pension costs. If management and public safety employees paid their full share of the employee share of their pension contribution, or even a portion of it, we would be on the path to full funding of our pension liabilities. From my perspective, that of a county worker, everyone needs to pay their share of the costs.

Share:
Previous : No on Proposition 18 Coalition Members Urge Repeal of Water Supply Act of 2010
Next : Vanguard Talks to Board Candidate Tim Taylor