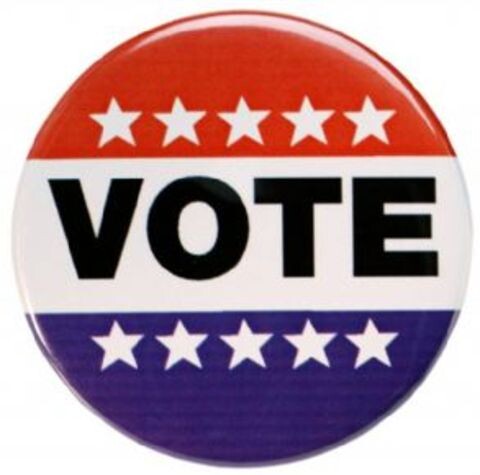 It is that time of year, time to read through all of the convoluted legalese of California’s ballot initiatives and figure out where you stand on the most obscure laws that will probably never impact you. Some are easy.  You know if you want to legalize marijuana, whether you oppose additional global climate regulations, or whether you are ready to get rid of the two-thirds vote to pass a budget.  But some of the others, might be a bit more tricky.

One of the ways to figure out some of the others is to see who supports and opposes it.  At the same time, it is interesting to look at a compilation of different endorsements to figure out where others are coming from.

I got a facebook message from a guy named Greg Larson and he has put together this great layout that lists all nine of California’s ballot initiatives and who has endorsed, including newspapers, the parties, and interest groups.

I think there are a lot of interesting things that can be gleaned from this layout, but one of the more interesting is that it gives us a bit of a natural test for just how liberal the media really is, at least their editorial boards. 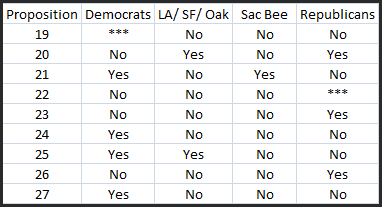 I would have put the Mercury-News as one of the papers, but they have not yet taken a position on three of the ballot items.  The LA Times, San Francisco Chronicle and Oakland Tribune all took the same positions on ballot issues so they are combined and I put the Sac Bee, which is somewhat different, in the comparison.

This is certainly not any kind of definitive test, but at least in terms of the ballot initiatives in this cycle, I don’t see strong evidence of liberal bias.

The Democrats agree with the LA Times, et al, on four of the 9 ballot initiatives.  The Democrats notably did not take a position on Prop 19, the marijuana legalization initiative, and the newspapers and the Republicans are in opposition to that initiative despite polls that suggest it might pass.

The Republicans did not take a position on Prop. 22, which is the initiative that would prevent the state from borrowing money from local governments and their redevelopment agencies.  They agree with the LA Times et al newspapers on five issues.

Looking at the Sac Bee it has only supported one initiative, Prop 21. That is the vehicle licensee fee to restore state parks funding – something the Democrats support but not the LA Times or Republicans.  The Bee agrees with the Democrats five times.

The Bee agrees with the Republicans four times.

The Democrats and Republicans agree on no issues.  So, it is not as though there are issues with which there is common agreement.  It is noteworthy that while the Republicans took no position on Prop. 22, Meg Whitman is a strong proponent of that ballot initiative.

I am not going to argue that the Bee is slightly more liberal than the LA Times.  But I think we do have strong evidence that all of the papers are basically moderate on the issues.  In all five cases, the split is 5-4.  The Bee agrees with the Democrats five times and the other papers agree with the Republicans five times.

There is no evidence here of liberal bias, at least among the editorial boards.

There are a few issues where one of the parties seems out of whack with the rest.  For example, the Republicans were the only ones willing to support Prop 23 which would gut AB 32, a bill that addresses climate change.

On Prop 24, the Democrats are opposing repealing legislation to allow businesses to lower their tax liability.

Republicans are the only ones supporting Prop 26, which would require a two-thirds vote for approval of certain state and local fees.

Democrats are the only ones supporting Prop. 27, which eliminates the independent Citizens Redistricting Commission – clearly that is a partisan motivation there, as they would control the redistricting process absent such regulation.

Democrats and the LA Times group agree on supporting Prop 25, which would drop budget vote requirements to 50% but preserve the two-thirds tax requirements.  The Sac Bee, however, opposes that, along with the Republicans.

I did not include the San Diego paper, which is sometimes noted as more conservative. They only agree with the Democratic Party three times, and the Republicans six times.  So they are slightly more conservative than the other papers.

This is far from any kind of definitive test, but it is interesting to note that, at least this year on these ballot initiatives, the papers are pretty much right down the center.  The parties were completely polarized on each initiative, except that each party did not take a stand on one of the ballot initiatives.

Share:
Previous : UCD Students Sit in Silent Protest Against Bigotry in UC System
Next : District Faces Another Huge Deficit As They Discuss Options for a Parcel Tax