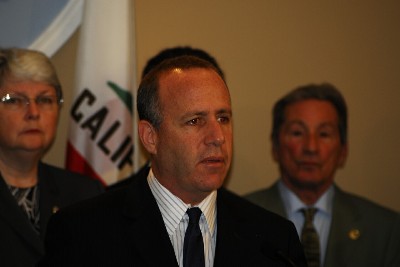 They would not share the details on Friday night, but the Governor and legislative leaders from both parties apparently believe that they have reached an agreement that would end the state’s record-setting budget stalemate.

“These are very difficult circumstances in difficult times,” Senator Steinberg said. “Not a lot of celebrating. But we all stepped up and did the work we had to do.”

A key piece in the puzzle will be the pension reforms.

“The governor has said since Day One he will not sign a budget that increases taxes and that does not reform our budget and pension systems,” said Schwarzenegger press secretary Aaron McLear. “That remains the case.”

However, Democratic leaders believe that the governor must negotiate any changes to the contracts with unions, through collective bargaining.  There was some confidence, apparently, that this could occur.

The plan seems to be a public hearing on the budget package on Wednesday, and then a vote of the full Legislature as early as Thursday.  Budgets require a two-thirds vote in both the Assembly and the Senate.

That has typically been a stumbling point, even after an agreement with the leaders have been reached.  Last year, several budget deals failed to capture the three Republican votes necessary to pass, and when they finally did, Republican voters and activists took electoral retribution, and at times even attempted recall.

However, this time is different?

“We think it is a budget that will pass,” said the Senate’s GOP leader Dennis Hollingsworth.

There were some clues as to what this contains.  The LA Times reported that the plan contains about $7.5 billion in cuts to services.

The Governor, back in May, proposed eliminating the welfare-to-work programs that would subsidize child care for about 150,000 children.  Democrats were able to minimize those cuts and get Republicans to agree to the Democrats’ budget proposal for social services and health programs, the Sacramento Bee reported.

Meanwhile, Democrats agreed to reduce their demand for K-12 spending, in exchange for repayment plans in future years.

According to the LA Times, “there will be cuts to schools, including a suspension of voter-approved formulas guaranteeing a set amount of revenue for K-12 education. Reductions in other social and health services are also expected, though the depth of those was not immediately clear.”

The Republicans agreed to a two-year suspension of a controversial corporate tax break, that will save the state about $1.4 billion.

“Republican leaders were reluctant to part with the tax break, which they had fought hard to create. To get their concurrence, Democrats agreed to replace it with smaller corporate tax reductions that would be permanent, one source said,” the LA Times reported.

The Governor called the suspension a tax hike, but Senator Hollingsworth said, “it’s not a tax increase.”

The problem, however, is that in order to minimize cuts, the state leaders agreed to a mix of rosy assumptions and onetime solutions, which means that this budget probably is not really balanced, and they will have to come back in a few months and cut more.

According to the Bee, the budget will assume $5 billion in new aid from the federal government, which is more than the $3.4 billion that the Governor projected in May.

State leaders agreed to create a rainy day fund that would be less restrictive than the 2009 ballot proposal that was overwhelmingly defeated at the polls.  This one requires a reserve of 10 percent, rather than the 12.5 percent proposed in 2009.

So what do we have?  We have an agreement that will not be sufficient, that will cut considerable additional money from already-bled dry education and social services, in exchange for more corporate tax loopholes.

But, at least we have a budget.

One thought on “Budget Deal Reached?”