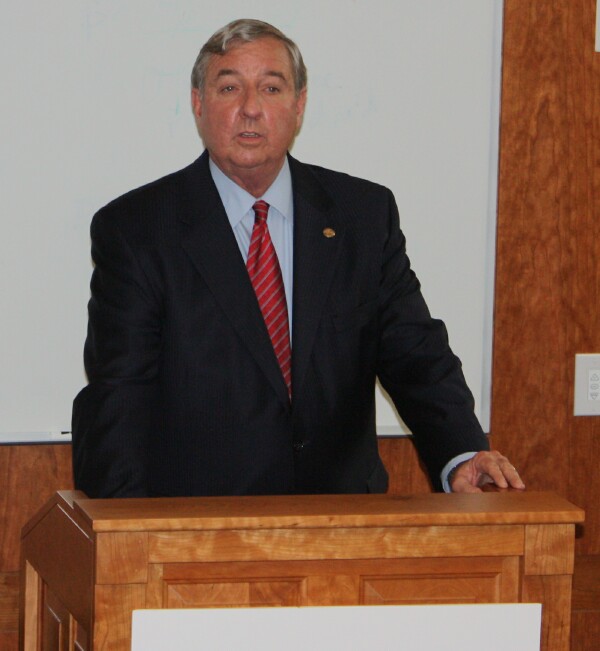 Accusations Fly As Ballots Continue to be Counted –

From the start, the California Attorney General’s Race figured to be one of the most important races on the downside of the ticket.  The outcome of this race may, for example, determine what happens with the Proposition 8 challenges, where Steve Cooley would likely be able to find a way to get California back as a party on the defendant side and that would change everything.

Steve Cooley may also be inclined to join other AG’s across the nation in suing on Obama’s health care reform.  Kamala Harris, for all her flaws (and there are many), is a strong opponent of the death penalty and has been pushing for sentencing and recidivism reform.

The stakes are high and the race is starting to get ugly – after the fact.  As of 3:42 pm on Monday, Kamala Harris has taken about a 31,000 vote lead over Steve Cooley, who declared victory on Election Night only to have to realize it was very much in doubt that he would win, as Harris took a small lead by the next morning.

The key may come down to Los Angeles County.  Cooley is the LA District Attorney, but SF District Attorney Kamala Harris has a sizable lead there.  However, there are roughly 150,000 votes yet to be tallied countywide and that could prove decisive in this battle.

There remain several hundred thousand ballots to be counted statewide, and officials estimate it still may be several weeks before this is all decided.  State law requires certification by November 30, which would be two weeks from today.

On Sunday, the LA Weekly reported that Kamala Harris’ chief strategist was accusing Steve Cooley’s campaign of intimidating election workers in Norwalk in an effort to disqualify provisional ballots.

Meanwhile, the Cooley campaign sent a letter to the L.A. County Registrar-Recorder objecting to the procedure for counting provisional ballots.

In a statement on Sunday, the Harris campaign alleged that the Cooley campaign workers were up to no good.

“In the last 48 hours, our monitors have witnessed an aggressive new offensive on the part of the Cooley campaign which reflects a new strategy designed to disenfranchise voters in Los Angeles County,” the campaign said.

“Having fallen behind in the statewide count, Cooley campaign officials were seen on Friday November 12 crowding the computer terminals of Los Angeles election workers and aggressively attempting to have ballots disqualified,” the statement continued.

The campaign concluded, “Following this aggressive behavior in the field, the Cooley campaign fired off a letter to the LA County Registrar objecting to its procedures for counting provisional ballots and requested a second review of signatures on provisional ballots.”

The Cooley campaign responded with its own statement, “Harris’ election monitoring staff have engaged in inappropriate contacts with county staff who are counting ballots. County staff has also held private meetings regarding ballot counting with members of the Harris staff that the Cooley election monitors were not aware of or invited to participate in until after they raised questions.”

Cooley consultant Kevin Spillane added, “In addition, there are serious concerns about the signature verification process and the verification of provisional ballots by county staff. These issues go to the heart of preventing voter fraud and ensuring the integrity of the ballot counting.”

He denied that Cooley staffers had been intimidating election workers.  “The Cooley campaign calls on the Harris campaign to join us in working to ensure that the final outcome is beyond question or controversy,” Mr. Spillane added. “Unfortunately, [Harris campaign manager] Ace Smith’s statement is typical campaign hyperbole and not supported by the facts.”

Meanwhile in an issue only tangentially related to the campaign, Steve Cooley’s gift-taking, and more importantly, gift-reporting practices have come under scrutiny.

Now the Fair Political Practices Commission has opened an investigation as to whether Mr. Cooley failed to properly report his gifts and whether the value of presents accepted exceeded the state’s limit.

The San Francisco Chronicle on October 29, 2010 reported that Mr. Cooley “received more than $4,000 worth of gifts over the past seven years that he did not disclose in annual public filings.”

According to the Chronicle’s story, “Cooley’s records were obtained through a public record request made by the campaign of his opponent, San Francisco District Attorney Kamala Harris, and given to The Chronicle, which compared those records with Cooley’s campaign filings. Harris is trailing Cooley in most polls in a race where up to one-third of voters say they are still undecided.”

“The gift laws are very clear – regardless of the source, if it is valued at more than $50 you have to report it,” Kamala Harris’ campaign attorney, Jim Sutton, told the Chronicle at the time.

The Chronicle identified at least 17 gifts, totaling thousands of dollars, since 2003 that were missing from Cooley’s disclosure reports.

Big deal?  Maybe.  Particularly since Mr. Cooley has run on an anti-corruption platform and yet took many of these undisclosed gifts from highly influential and wealthy individuals.  “Cooley’s campaign says many of the generous gifts are from longtime personal friends. But public records show many of those people are also prominent figures in the criminal justice community, including current and former judges who have worked with Cooley. Other gifts are from high-profile business executives in Los Angeles and subordinates in the district attorney’s office,” the Chronicle reported in August.

He also insisted in an August 9, 2010 story that he always disclosed his gifts.

At the time the Chronicle reported, “The gifts – including nearly $1,600 worth of tickets to Lakers games, almost $1,600 in tickets to Hollywood Bowl events, and hundreds of dollars worth of scotch, wine and cigars – are not illegal under state law, but critics say they could pose a political problem for the candidate.”

Steve Cooley’s campaign defended the gifts, telling the Chronicle that “most are from friends that he has known for years, not from people with business in front of the prosecutor.”

“The bottom line is that he reports everything and that we are talking about someone whose integrity is beyond question,” said Mr. Cooley’s political consultant, Kevin Spillane. “You don’t have people who are lobbying the district attorney on (work) issues, these are personal relationships.

“He and his wife have a lot of friends, and that’s what you’re seeing, him taking gifts from close personal friends.”

Most of this was known but lost in the shuffle of the campaign cycle.  Now, with two weeks left to count, we will see what happens in the only race statewide where the Republicans have an opportunity to win the race.

Right now, Ms. Harris has pulled to a small lead, but those leads have been fleeting in the post-election period, shifting from one side to the other.  The key question is where the other votes are at large, as we know the 150,000 in LA County will break towards Kamala Harris pretty strongly, despite it being Mr. Cooley’s backyard.

4 thoughts on “AG Race Remains Too Close To Call”