Back in August of 2008, the Yolo County DA’s Office was trumpeting this as a case of “Yolo County’s Own ‘To Catch a Predator’ ” which resulted in 40-year-old Todd Robert Dixon of Elk Grove being convicted of pandering, for his actions on December 27, 2007 when he solicited a seventeen-year-old girl in West Sacramento to have sex with him in exchange for money.

Now, just over two years later, the conviction has been thrown out due to insufficient evidence that Mr. Dixon committed that specific charge of pandering, and Mr. Dixon is free and cannot be recharged for this crime.

The Third District Court of Appeals threw out the charge based on a case that was decided back in 1874, explaining that a “‘pander[er]’ is one who procures the gratification of the passion of lewdness for another.'”

The Third DCA writes, “The sufficiency of evidence argument raised here is one of law. Does pandering require “simply offering money to someone in exchange for sex,” as the People argue, or does it require more, namely, causing someone to become a prostitute to satisfy the desires of another person, as defendant argues?”

According to the court, “Defendant does not meet the definition of a panderer. He sought to have sex with L.N. and offered her money to persuade her to do so. There is no evidence that he intended to have her become a prostitute for others.”

They conclude, “Unlike the cases the People cite, the evidence here established that defendant offered L.N. money to have sex only with him. As we have explained, under the rationale of Roderigas, supra, 49 Cal. at page 11, defendant’s actions do not make him a panderer.” 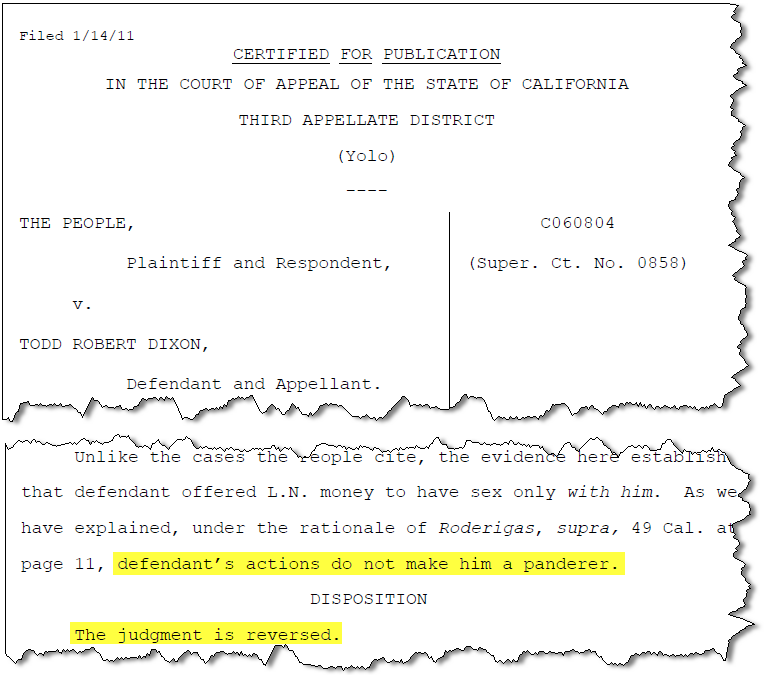 The DA’s Office made a huge production of this case back in August of 2008, with a lengthy press release.

The Third DCA’s summary events suggests that Mr. Dixon asked the victim if she were alone because “he wanted to discuss something private and personal. He then asked what she was doing for New Year’s Eve.”

The girl replied that she was babysitting her younger brother. Mr. Dixon asked whether she wanted to make a quick, easy $200. She responded, “it depends,” and asked if he wanted her to babysit his children.

Mr. Dixon said that was possible but then started joking about the $200. Mr. Dixon ended the call by saying he would call back when it was “legit.”

The Third DCA adds, she “concluded that defendant was not talking about babysitting and instead was wanting to be alone with her for ‘sexual intercourse or something like that.’ “

The seventeen-year-old girl immediately notified her parents about Dixon’s solicitation in the telephone conversation and text message. Her stepfather notified the West Sacramento Police Department, the DA’s Office wrote.

The DA writes, “Dixon, believing he was corresponding with the seventeen-year-old girl, stated he would get a room at a Motel 6 in West Sacramento. Throughout the evening, Dixon continued to correspond through text messaging with the undercover officer, believing she was the teenage girl. He sent a text message to the girl’s cell phone once he checked into the Motel 6.”

They continue, noting, “When the Community Response Team was in position at the Motel 6, the undercover officer, posing as the seventeen-year-old girl, sent the final text message informing Dixon she had arrived. Much to Dixon’s surprise, when he opened the door to the motel room he saw police officers, not his friend’s seventeen-year-old stepdaughter who he planned to meet and pay money to have sex with.”

Mr. Dixon was arrested, and the officers found $226 in cash in his pocket.

“Ironically,” the DA’s Office notes, “when the officers went inside the motel room they saw Dixon had been watching the NBC television show “To Catch a Predator.’ “

According to Deputy District Attorney Susz, “Fortunately, law enforcement caught Dixon before he victimized this seventeen-year-old girl or another child. We commend the seventeen-year-old girl for coming forward and the West Sacramento Police Department Community Response Team for its immediate response in catching this predator.”

Yolo County District Attorney Jeff Reisig commented, “Cases like this should remind us all that sexual predators like we see on television shows are here in our communities too. Parents, kids and communities need to be aware that technology like the internet and cell phones sometimes become the tools of these types of criminals. Thankfully, the victim in this case did exactly what she was supposed to do when she received the inappropriate text message – she told her parents.”

Unfortunately, it appears that the DA charged this individual with the wrong crime and he is now free.

Based on the evidence presented here, it appears an actual criminal has gone free because in the DCA’s opinion, the DA charged the defendant with the wrong crime.

However, we also offer this nuance.  The Vanguard spoke to some familiar with this portion of the law.  They believe that this crime did constitute a pandering case and that the 3rd DCA went out its way to overturn this by citing an over-100-year-old authority.

No one is quite sure why that is the case, but it may be a message to the DA’s Office to clean up their act or risk more cases getting thrown out.

From our standpoint, if the facts of this case are true as presented by both the DA’s Office and the Third DCA, it appears the defendant did commit a crime and is now free with prejudice.  Double jeopardy is in effect and they cannot be charged again.

Our consistent complaint has been that the DA’s Office overcharges defendants on a routine basis, often charging them with laws which were never intended to apply to such cases.

If that is true, then perhaps karma is coming back to haunt the DA’s Office.  It is unclear why the DA’s Office in this case did not charge the defendant with charges stemming from soliciting sex from a minor and charges of that sort.

We ought to be a bit careful before going much further on this, because we do not know whether the defendant disputes other facts in evidence.  The 3rd DCA writes, “In light of our conclusion, we need not address defendant’s other claims of error.”

Given that, we should not assume that Mr. Dixon indeed committed a crime, although there does not seem much doubt as to that based on the evidence presented.

Nevertheless, we ought to hammer home a critical point here.  Many defenders of the DA’s Office have been more concerned with catching criminals than following the strict procedures of the law.  However, here is a case where a possible criminal is now going free because the DA’s Office may have charged him with the wrong crime.

We would also be remiss if we did not point out the possible influence of grants.  We have seen a number of sexual offense cases that are extremely problematic, starting with the Noori case in which the defendants faced 63 felonies and were acquitted on every one of them by a jury, continuing to the Artz case.

We have noted the DA’s improper use of the Artz case for grant purposes, and we also note an article in the Davis Enterprise from Friday in which the DA’s Office was going into schools to warn students about how to protect themselves from sexual predators and others on the internet.

There is nothing wrong with this kind of educational outreach, but we do note the quote from DA Jeff Reisig, “We were fortunate enough to receive a federal Child Sexual Predator and Internet Crimes against Children grant. The application was very competitive and we were one of the few offices in the state to receive funds. This funding is critical considering the budget issues this county is facing.”

The quote continues, “This grant primarily funds the District Attorney’s Office to conduct forensic analyses on cases involving computers and cell phones. Many of these are cases involving the possession and distribution of child pornography. This grant also allows us to conduct Internet safety training. Usually we concentrate on ‘train the trainer’ sessions, but when possible we really enjoy interacting one-on-one with young people, parents and teachers, informing them about possible dangers on the Internet.”

The problem with the grant is not the educational activities, but the fact that the DA has to earn and justify the grant.  The application was in fact very competitive.  How competitive?  The Vanguard has not received the grant as of yet, but we know that only two jurisdictions in the state were awarded.

What we do know is that in the DA’s Statutory Rape Vertical Prosecution program, they improperly used the Michael Artz case as a factor, along with several other questionable cases.

The Artz case was most telling because it specifically mentions that the purpose of the “SRVP Program is to vertically prosecute adult offenders engaging in unlawful sexual intercourse as defined under PC §261.5. It is not the intent of the SRVP Program to subsidize prosecution of these cases for forcible rape or child molestation cases.”

The Artz case as it was tried was primarily a case about forced sexual contact, and the defendant was acquitted of that charge.

Bottom line, the influence of money weighs largely in these cases, and for whatever reason, sexual assault and statutory rape cases seem to be among the most heavily subsidized by grants and the most problematic class of cases.

Share:
Previous : Pensions Across the Country Threatened by Deficits
Next : Commentary: Growth is not the Answer to Schools Fiscal Problems