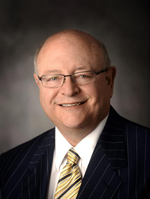 I think this falls under the category of really?  Are you kidding me?  But what has happened in the last week is that some of UC’s highest-paid employees – their executives – are now threatening to sue the UC system if the system does not boost their retirement pensions.

That is right, 36 employees making at least $245,000 per year have written a letter calling on UC to fulfill a promise to increase their pensions – this in the midst of the UC’s efforts to overhaul a system to make up for a $20-billion deficit caused by a 20-year hiatus in contributions to the fund.

“A health system spokesman says Pomeroy, Rice and McGowan have no comment, but stand behind the letter,” the Bee reports.

Needless to say, in times when everyone is being asked to sacrifice and people are either being laid off, furloughed, or are otherwise taking paycuts, when pension funds are on the verge of collapse, this threat by these executives is not going over well.

“It must be hard to see the real world from the penthouse suite atop the University of California’s ivory tower,” wrote San Jose Mercury News Columnist Patty Fisher late last week, “I assume that’s why 36 of the UC’s highest-paid executives are threatening to sue unless the regents sweeten their already-lucrative pensions.”

The UC promise was made back in 1999, when we lived in a very different world.  In the letter, the 36 employees suggested that they had had a chance to take more lucrative jobs, but remained in their current positions because of the promises made to improve their already-lucrative pensions.

This promise was made during a time when housing prices were booming, when the UC Pension fund was booming to the point that no one had to pay into it.  For twenty years the fund basically grew by itself with no contributions from employees, the university or the state.

However, reality has hit this fund and for the first time in two decades, the University and its employees will begin paying into it.  And the task force had additionally recommended reducing benefits and raising the retirement age – you know, what everyone else in the state is going to be forced to do, from janitors at schools to teachers to municipal employees to state workers to prison guards – everyone apparently except executives at UC, at least in their world.

“In a letter to the regents, the executives demanded that the university let them accrue pensions based on their entire paycheck instead of capping the eligible salary at $245,000, which the IRS used to require. In 1999, UC promised to lift the cap if the IRS agreed. In 2007 the IRS did lift the cap, but the university never made the change,” Patty Fisher writes.

As a result, President Mark Yudof has essentially asked the regents to cancel the 1999 agreement rather than pay an additional $5.5 million a year to pad the pensions.  How lucrative would this change be?  According to the San Francisco Chronicle who first broke this story, “a person earning $400,000 at retirement would get an annual pension of $300,000 compared with $183,750 in the current system.”

She writes, “Of course the executives are upset. I was, too, when my company froze my pension. Yes, UC made a promise in 1999, but the world has changed. Millions of Americans have seen promises broken. Their pensions, health care and job security have evaporated. So has the promise of an affordable college education.”

The Sacramento Bee this morning has joined the criticism of these executives.

“We’re in a time in California when everyone has to share the pain, and leaders have to set the right example,” the Bee writes.  “It is dumbfounding that some top officials at the University of California are doing the exact opposite.”

“What’s appalling is that people – who already earn far more than the vast majority of the Californians who pay their salaries – want even more in these tough times. These execs richly deserve the withering criticism they’re already getting from Gov.-elect Jerry Brown and legislators,” the Bee continues.

The Bee concludes, “Good people don’t threaten lawsuits against a cash-strapped state to enrich themselves.”

We have criticized UC executives a number of times on these pages for taking huge salaries and having increased salaries at times when the average worker is being asked to take pay cuts.  There is always a defense that they accepted less, to work at UC.

But this is just appalling.  If these executives really can make more money elsewhere, then perhaps they should leave and make sure the door hits them on the way out.  We do not need these individuals that badly.  They have hardly done such a great job to begin with.

In a time when the world is changing, these people are living by rules set in 1999.  That world is gone and perhaps it will never come back.

These individuals should be grateful that they still have jobs, that put them in the top one percent of income earners, rather than complaining that they should get more upon retirement.  To do that is nothing short of a gift of public funds, and is corruption at its worst.