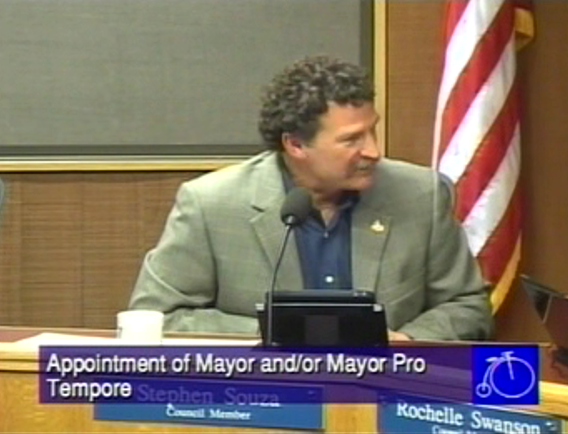 On Tuesday night, the Davis City Council dealt with the issue of who would succeed Don Saylor as Mayor, while setting forth the process by which they would decide who will succeed him on the council.

Joe Krovoza was elected as the new Mayor of Davis while Rochelle Swanson was named to fill the position Mr. Krovoza previously held as Mayor Pro Tem.  It was a largely unsurprising result, however, it was marked by a surprising degree of contention as Councilmember Stephen Souza made two separate efforts on his own behalf.

It has not been a secret that Stephen Souza has coveted the Mayoral position.  However, he is going to have to earn that distinction electorally if he is to obtain it all.

Sensing that an outright appointment as Mayor was out of his reach, Mr. Souza attempted to concoct a solution that could only be described as fitting.  He would have created a rotating Mayoralship for the next 18 months.

One immediate problem would have been that would have put Rochelle Swanson who finished second to Joe Krovoza in the last election as Mayor before Mr. Krovoza took the position he won electorally.

Another problem is that Mr. Souza would gain an electoral advantage from being able to add the title of ex-Mayor to his resume as he faced reelection in 2012, while Sue Greenwald has already held that title.

“I have no doubt that you’ll be a fantastic Mayor, Joe,” Councilmember Souza began.  “But I think the point that is unique here is the fact that we have an election cycle in which 18 months of a Mayoral shift goes to an election cycle that Sue Greenwald, myself, and former Mayor Don Saylor participated in.”

“That election cycle is an extra 18 months,” he continued, “It would be very unique to see a three and a half year term, so therefore I thought we had this extraordinary opportunity before us.  There is bounty in the 18 months that we can split amongst three other councilmembers.”

Former Davis Mayor Jerry Adler spoke, as author of the city’s ordinance on the selection of the Mayor and the Mayor Pro Tem.  While he argued that the purpose of the ordinance was to take the politics out of the process, he said that in this situation there is no reason that the Mayor Pro Tem would automatically ascend to the Mayorship.

Furthermore, he argued that as Mayor, Joe Krovoza would serve for three and a half years consecutively, something that has not occurred in Davis for decades.

While Jerry Adler claimed authorship of the ordinance, the Vanguard learned later that in fact Maynard Skinner and Lois Wolk crafted that ordinance, with Jerry Adler only playing a nominal role in its passage.

He argued that the council had the ability to appoint anyone and they ought to look somewhere other than a three and a half year Joe Krovoza term as Mayor.  While he did not expressly advocate for Stephen Souza at this moment, it would later become clear that Mr. Adler was there speaking on Stephen Souza’s behalf.

While Rochelle Swanson seconded Mr. Souza’s motion for the purposes of discussion, she would also second Sue Greenwald’s substitute motion that moved that Joe Krovoza be named Mayor.

Rochelle Swanson argued that while she sympathized somewhat with Stephen Souza’s idea, she felt that she and Joe Krovoza were elected to help foster in a new and more collegial council and that the need for continuity was important.  Thus she felt that changing the Mayorship every six months would be disruptive.

Joe Krovoza, clearly awkward in speaking on his own behalf, stated that the community that he had spoken to had an understanding that, while technically the council had the prerogative to appoint anyone, the expectation was that in the case of a vacancy of the Mayor, the Mayor Pro Tem would become the next Mayor.

The motion would pass 3-0 with Stephen Souza abstaining.

However, failing to recognize the dynamics, Stephen Souza made an ill-considered and fruitless attempt to get his colleagues to consider him.

“Now I have to speak to myself,” Councilmember Stephen Souza began in one of his most ill-considered moments on the council, of which there have been several noteworthy moments.  “Before my motion was to the body as a whole, so now I’m going to speak for myself.”

“Twenty-three years of service to this community, numerous evenings I have given up,” he said.

“Every one one of those bodies I have served on, I have done it fair and equitably, and always treating everybody who was a member of that body with respect,” he continued.

“In 2008, I was 381 votes short of being the top vote getter, that’s pretty close,” the Councilmember continued.  “I think all of that service, that closeness of an election – in spite of knowing that the Mayor Pro Tem doesn’t have but a ceremonial position and title – I would like to have it be part of my service to the community.”

“My guess is that you’re going to be the top vote-getter one of these days, Rochelle, and you will get the Mayorship,” he continued.  “I don’t know what’s happening in my future.  All I know is that I’m here now and I know I have another 16 months of service that I can give this community.  I don’t know if I’m running for reelection.”

You can watch the entirety of his comments on the Youtube video below.

In the end, he put his colleagues in a tough position, rather than bowing out gracefully.

Jerry Adler, as a member of the public, went up and spoke on Stephen Souza’s behalf, arguing his tenure of service while acknowledging that he no longer even lives in Davis.

At this point, I spoke up and suggested that the council needs to consider the fact that given that both Stephen Souza and Sue Greenwald are up for election in 2012, they ought not play electoral favorites.  That left Rochelle Swanson who would not be running for reelection, if at all, until 2014 as the most obvious choice.

Mayor Krovoza picked up on this point as well, citing the need to remain above politics in these matters.

Contentiousness broke out as Sue Greenwald explained why she did not feel that Stephen Souza was a good choice at this time and Stephen Souza tried to counter that.

In the end, Rochelle Swanson was put into the awkward position of having to announce her intention.  She made the point about the change in tenor in the last twenty minutes and that she had been elected, in her mind, to raise the tone.

Once again the vote ended 3-0 with Stephen Souza abstaining.

Following the vote, Stephen Souza appeared to leave the dais, gathering his stuff. He returned for the last brief discussion on filling appointment vacancies, before rushing off without a comment and without talking to his colleagues.

His handling of this matter and his reaction to the vote should show to all citizens precisely why the council made the right decision in making Joe Krovoza Mayor and Rochelle Swanson Vice-Mayor.

Mr. Souza inadvertently said it all when he called the Davis Mayorship “bounty” and suggested it could be “split,” as though the Mayorship of the City of Davis were some prize to be obtained and that he would show his magnanimity by sharing in the bounty with his colleagues rather than try to hold onto it for himself.

He spoke to the values of respect, compassion and civility, which he argued could be held even when holding different views, but at the same time, he has not always adhered to that.

That tone continued when he gave a very self-serving call for his own appointment to Mayor Pro Tem.  “I would like to have it be part of my service to the community,” he said as though, again, it were some kind of prize.

It was undignified to literally “plead” with his colleagues to “give me the title.”

Mr. Souza has had good moments and bad moments in his nearly 7 year tenure on the council.  This was a moment that he will not want to re-live and neither will the community.

He wanted it, he wanted the title and the acknowledgment too much.  Rochelle Swanson was awkward and tenuous about the whole thing, as was Mayor Krovoza.  That is how a public servant should act, in the best interest not of themselves but of the community.

It is telling that in his plea, Stephen Souza only talked about himself, never about the community and why his appointment would be in the best interest of the community.  It was about him and getting that title, and that is why above all else he should not have it.

Worst yet, he turned something that should have been about Davis’ future, and the joyous occasion for Joe Krovoza and Rochelle Swanson to be new leaders in this community, into something that seemed political, petty, distasteful and tense.  You could could cut the tension with a knife, as he took the frivolity and joy out of that room.  Rochelle Swanson said it about the changed tenor, and that was ultimately why she decided, perhaps reluctantly, to speak for and vote for herself.  It was in the best interest of Davis, not because it was in the best interest necessarily of Rochelle Swanson.

In the end, Mr. Souza is a legacy of the former council, he is the lone hold-out from what was once a powerful 4-1 voting block that rammed through Covell Village.  That was a council marked by petty differences and disputes.  While Mr. Souza might not have been the biggest instigator of those conflicts, and at times even helped smoothed things over, there were a number of occasions where he joined in and enabled things to happen that should not have occurred.

The times have changed.  The voters elected Joe Krovoza and Rochelle Swanson, two people who will be polite and courteous and respectful, even during the times when they disagree on the issues.

It should also signal to the public that times have really changed and the idea that there will be a new gang of three is not accurate.  We do not know where this council will come down on policy issues, but I think the tenor of the relationships will improve over time.

Share:
Previous : The Specter of Declining Enrollment Hangs Over Both District and City Policies
Next : The 9th Circuit Court Strikes Down Prop 8