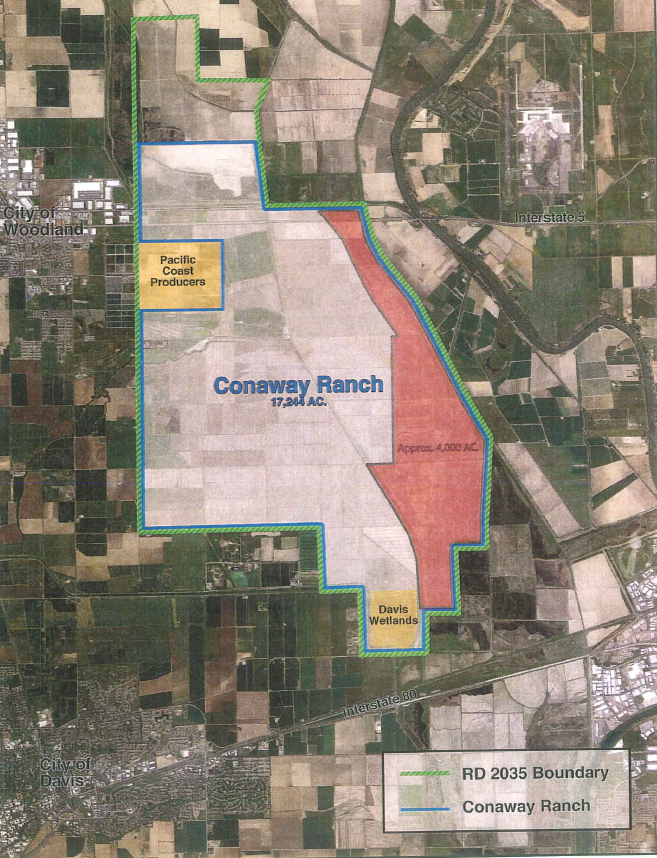 Senator Lois Wolk must have been stunned when she attempted to meet with county staffers, in advance of Tuesday’s meeting that would first rescind the actions of December 17 that approved an agreement over Conaway Ranch, and then reconsider the agreement.

According to her public testimony on Tuesday, she was told the Board, “A week or two ago, we did try to work on the staff level to share our substantive concerns but we were told that there really was no interest in discussing the substance of our concerns, that in fact this was a formal proceeding to deal with the Brown Act issue.”

Senator Wolk would go on to make about five modest proposals that she felt would strengthen the agreement, to address some of her concerns.  Instead, the board did not even bother to discuss her suggestions and instead rubber stamped their action from December 17.

As Chair of the Board, Supervisor Matt Rexroad told the Sacramento Bee over the weekend, he expects the same 3-2 vote.

The Bee reported, “Board Chairman Matt Rexroad said in an interview that he still feels the December vote was legal. The meeting and new vote Tuesday are just to make sure it is “absolutely rock solid,” he said.”

“I’m very comfortable with my vote on this, and I think we’re fine procedurally,” he told the Bee.

“He expects the 3-2 vote to be the same, even though Supervisor Helen Thomson retired at the end of the year and has been replaced by Don Saylor of Davis,” he told the Bee.  “Could something crazy happen?” Rexroad asked. “Yes, there’s always a risk.”

In technical terms, what happened on Tuesday may be a violation of the Brown Act, and if not the letter of the law, then the spirit.

The critical question is whether the county violated the Brown Act back in December for failing to give the required 24-hour notice for the meeting.  The county maintains to this day that they followed the law, however, they wanted to be sure, given public complaints.

Well, if that is the case, having a meeting where the outcome was largely decided before the fact belies that effort.  They need to have a true meeting on the issue, where there was the possibility of changing wording and their minds.  That did not happen.

It is very simple to show how this might be a Brown Act violation.  If the Board did not give sufficient time for public notice back in December, then the public also did not have the chance to weigh in with their opinions, to suggest modifications, or, indeed, to really study the issue.

This is a very complex issue that takes time to study.  By ramming it through as they did in December, they short-circuited public feedback.

On Tuesday, people like Senator Lois Wolk were able to weigh in with concerns.  However, the Board failed to address any of those concerns – that is of course in their realm of discretion.

However, the communication to Senator Wolk beforehand is very troubling.  It suggests that the Board and Staff simply saw this as a formality, not a chance to make substantive changes.  But by failing to take into account even the possibility of making substantive cases, they show that this is not a true open process.  And thereby they negate any benefit that a second hearing would have.

The letter of the Brown Act requires a full public notice of a meeting so that the public may be notified, to attend and weigh in.  If they short-circuited that process in December, by failing to take and honestly consider feedback from the public, they have still not met any Brown Act obligations.

In short, we are where we started out a few weeks ago.

A letter from Don Mooney at that point alleged “the notice for the December 17, 2010, Special Meeting violated the requirements of the Brown Act, Government Code, section 54956.”

According to Mr. Mooney, “The Brown Act mandates written notice must be sent to each member of the legislative body (unless waived in writing by that member) and to each local newspaper of general circulation, and radio or television station that has requested such notice in writing. (Gov’t Code, § 54956.) This notice must be delivered by personal delivery or any other means that ensures receipt, at least 24 hours before the time of the meeting.”

The County failed to provide the mandated 24 hours of notice to Board members or the media, the group charges, citing the December 22, 2010 article in the Davis Enterprise where Supervisor Jim Provenza charged that he had not received notice of the meeting until roughly 4:52 pm on Thursday, about 21 and a half hours prior to the meeting.

The article reported that the County emailed the notice to the Davis Enterprise at roughly the same time.

The question now turns to whether that charge was true.  If it was, then the actions of February 8, at the very least, violate the spirit of the Brown Act and the county really did not rectify the situation.

As such, the violation of the Brown Act remains.  At least the spirit of the law has been violated.  Whether the letter of the law was also violated is another question that a judicial body may have to adjudicate.

Share:
Previous : Word To The Wise: How To Assist With Avoiding Minefields of Old Age
Next : Commentary: Justifying the County Conaway Vote

17 thoughts on “Commentary: Another Brown Act Violation by the Board of Supervisors?”