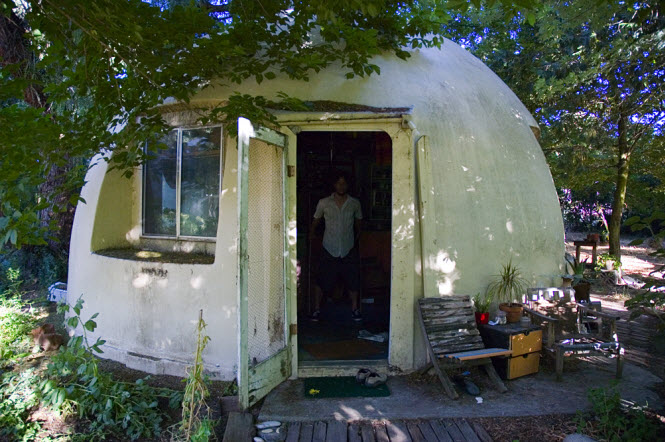 It’s fantasy meets sci-fi; it’s Lord of the Rings meets Star Trek; it’s the UC Davis Domes! Imagine 4 acres of the greenest grass overflowing with trees, flowers and free-range chickens everywhere. Now on these 4 acres imagine 14 quirky polyurethane-insulated fiberglass Domes. Put it all together and voila, you have yourself the UCD Domes.

The Domes, established in 1972, serve as affordable on-campus housing with rent averaging at only about $250. Some unique amenities offered by this community, which houses 28 students, are; organic gardens, community potlucks, a horseshoe arena, and a greenhouse.

However, the significance of this community roots so much deeper than just cheap rent and organic gardens. The Domes are a historical part of not only the campus, but also, the city of Davis itself; no other campus in the United States has anything like it.

So why is it then, that this fantastical, Davis defining landmark is looking to face extermination come July? Simply put, they are not ADA approved, and furthermore, it would cost an estimated 1 million dollars to bring the Domes community up to code.

However, the “Domies”, as the residents are often referred to, did not go down without a fight. They argued that the costs were grossly inflated so as to reappropriate the land. They commissioned their own engineers for a second opinion on the matter and found that the Domes could be fixed, short-term, for the relatively low cost of $5000.

The Domies have also argued that the Domes community has strong alumni support indicating that the experience one gains from living in the Domes is so profound that it is worth preservation. They have urged the university to allow them to perform touch ups in the now, as a long-term solution is decided. Nonetheless, Student Housing is relentless and insists that short-term fixes are just not an option.

Students, many of which did not even know the Domes existed, have been surprisingly unsupportive of their preservation. “Until this conversation I didn’t even know what the Domes were so I really don’t think they are as ‘campus defining’ as we would like them to be; so I say we not waste money on a lost cause and invest it in I don’t know, say classes that keep getting cut.” These were the words so matter-of-factly spoken by Brittany Cruz, a third year biomedical engineer.

Other students agree: “I want to be sympathetic but when I have things to worry about like paying rent and which class necessary for my major is about to go next  I can’t bring myself to support possibly wasteful spending on the dorms.” These words spoken by Chris Drake, a second year political science major, seemed to be the general sentiment harbored by most students.

One student, Lily Rivas, a third year chemical engineer, went so far as to call “the Domes cause” selfish: “So they want to waste time, money and resources on something which benefits a grand total of 28 students. That just seems kind of selfish; I’m not sure what else could potentially be done with the money but there has to be something with a bigger scope.”

As ideal as it may be, preserving the Domes for historical, landmark reasons may be superfluous with landmarks such as, the co-ops, the egg heads, and even the social science and humanities building (AKA the Death Star) serving the same campus-defining purpose. With my classes on the chopping block and my tuition rising, maybe it is best to trust Student Housing’s judgment.

However, not all students feel that way: “This is a clear cut case of ‘the man’ picking on the little guy to get what he wants out of him; I’m not convinced they need to go.” Kelly Young, a fourth year communications major, stated this as she shook her head with disbelief when informed of the costs associated with the Domes restoration.

“I know it only houses 28 people but if that’s taken away you’ve rendered 28 people homeless; plus, why would we want to take one of the more aesthetically organic plots on campus and turn that land into another concrete building housing more college bureaucracy.”  These were the cries of Mike Heinrich, a second year physics major, who has a friend currently residing in the Domes and his friend swears by them.

No matter what is fact and what is conspiracy theory, the reality of the situation is that at the start of July the Domies have to pack up and hit the road. As a last ditch effort to cling to the struggling breaths of the Domes life force a Sustainable Living/Learning task force has been initiated.

This task force includes: campus architect Clayton Halliday, assistant professor of community and regional development Ryan Galt; and associate director of Student Housing Mike Sheehan, to name just a handful of those dedicated to finding a middle ground. The task force serves primarily to plot a new vision of the Domes community and how it will support Davis’ sustainability objectives. The effort has been termed “Domes 2.0”.

The answer to the question as to whether the Domes eviction is a harsh necessity or a case of power abuse is still up in the air. The answers to the questions about whether this affects enough students and whether the renovation money can be put to better use are still debatable.

But the real pressing question which I know is on everyone’s mind is, if the creators of the Domes set out to replicate the Shire from the Lord of the Rings (which I’m quite positive they did as made apparent by all the greenery and the dome shaped housing). Why is it than, that the land is called “Baggins End” instead of “Bag End” as it is titled in the book?

Share:
Previous : Tea Party Wave Sweeping Country Appears to Be About to Miss California
Next : Commentary: Moving On From Measure A – The Future of the District

6 thoughts on “End of the Line For the Domes?”