After months in a trial and several months of deliberating, Judge Kathleen White ruled, as most observers and participants expected from the very start, to impose a seven-year injunction on the “Safety Zone” in West Sacramento.

The trial began on July 12, 2010 and ended officially on December 15, 2010.  During the long on again/ off again trial, Judge White heard mainly accounts from law enforcement.  At one point, she admonished the plaintiffs in this case, the Yolo County District Attorney’s office led by Ryan Couzens and Jay Linden, to produce civilian witnesses who could testify that the alleged Broderick Boys gang represented a nuisance to their community.

This would be crucial in her ruling, as she found the small number of civilian witnesses for the prosecution compelling in their testimony, while she found the blanket denials by defense witnesses, many of whom had relatives who were named defendants in this case, to be self-serving. 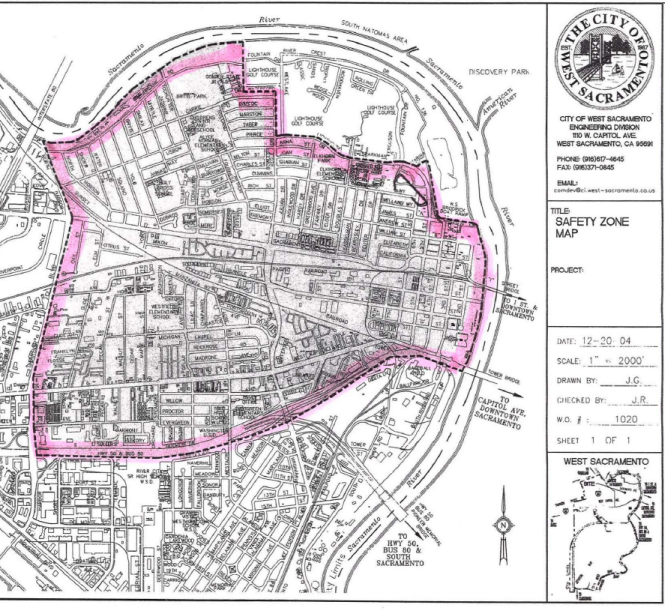 Judge White found that the balance of harm favored injunctive relief, as the limitation of the rights of members of the gang were outweighed by the need to protect residents in the Safety Zone from the various crimes.

She did limit the term of the gang injunction to seven years, ruling, “The uncontroverted evidence establishes a need for an injunction of limited term.”

She continued, “Credible expert testimony established that members are typically in gangs for several years. Based on this testimony and all the evidence at trial, an injunction for a term of seven years would sufficiently abate the nuisance.”

In making her ruling, Judge White found that by “clear and convincing evidence” a number of facts applied.

First, that the Broderick Boys in their various forms “exists and operates within the Safety Zone.”

She wrote, “The Broderick Boys is an unincorporated association, consisting or two or more individuals, joined together by mutual consent for social, recreational and other common purposes, and that it acted and continues to act by and through its members, both individually and collectively.”

Furthermore, she finds them a gang as defined, “for the purposes of a gang abatement injunction as set forth in People v. Englebrecht (2001) 88 Cal. App. 4 1236, 1258. The Broderick Boys and its members function under a common name, with common signs, symbols and colors, under circumstances that establish the group as a distinct legal entity, engaging in activities that amount to a public nuisance, as described below.”

She found that 17 of the named defendants are “active members of the defendant Broderick Boys, each has been observed in the Safety Zone, and are responsible for the public nuisance.”

Judge White further ruled that the Broderick Boys “has engaged in and continues to engage in a pattern of conduct in the Safety Zone that constitutes a public nuisance under Civil Code §§ 3479-3480.”

She wrote, “Acting individually and/or collectively, defendants have created a public nuisance in the Safety Zone by engaging in, inter alia, violent assaults, robberies, intimidation, trespass, theft, illegal possession of weapons, possession of drugs for sale, and by ‘tagging’ public and private property with gang symbols. They have ‘patrolled’ the Safety Zone, congregating in public view, displaying gang tattoos, symbols, colors and signals to intimidate residents and often announce their gang membership as they have committed criminal acts. They threaten persons whom they perceive to have disrespected the gang, and retaliate against those who speak against them. This activity occurs most frequently after dark and before sunrise.”

Furthermore, “Defendants, and each of them, collectively, individually and in concert, through their criminal conduct, have created an atmosphere that is injurious to the health of those who work and live in the Safety Zone.”

She continued, arguing that current laws are not sufficient to stop the threat from the gang.

“There is no adequate remedy at law in that criminal prosecution has not stopped the nuisance created by the defendants’ activities,” Judge White rules. “Without the injunction, defendants, and each of them, will continue to maintain the nuisance by participating in and encouraging their criminal and nuisance activities, irreparably harming the community and the individuals who live and work in the Safety Zone.”

“The nuisance is ongoing, and although attenuated somewhat since the issuance of the preliminary injunction, it still exists,” she continues.

She ruled that there is an adequate process in existence under which a gang member could be removed from the list, either due to inactivity or by opting out.

“The balance of harms favors injunctive relief,” the Judge continues. “In weighing the equities between restricting certain limited conduct of active members of the Broderick Boys in a specific geographical area on the one hand, and protecting Safety Zone residents from razor slashings, beatings, robberies, theft, intimidation, drug sales, vandalism and other serious and persistent public nuisance activity on the other hand, the balance tips decidedly in favor of the injunction.”

Judge White argued that the case turns on the credibility of the witnesses.

Wrote Judge White, “The Court, sitting as trier of fact, made credibility determinations based on the evidence and the totality of the circumstances. The court found the testimony of the victims of and percipient witnesses to the crimes described during the trial particularly credible and compelling, notably the testimony of James Hopkins III, Reece Hopkins and their father, James Hopkins, Jr., and also James Kephmi, Jacob Keating and Su Matsumoto.”

She continued, “The court also found credible the law enforcement officers who testified about their response to crimes in the Safety Zone and contacts with the alleged Broderick Boys.”

However, she also wrote, “The defense witnesses were equally credible in their description of the Safety Zone as a community with strong family ties. Their descriptions of the Broderick and Bryte areas in what is now the City of West Sacramento portrays a close knit, family-oriented neighborhood that harkens back to a simpler time, when residents knew all their neighbors, and the ties of family, church and school ran deep and across generations.”

Less credible, she wrote, was the testimony of defense witnesses as to the “nonexistence of the Broderick Boys gang.”  She cited, in particular, the witnesses’ relationships to named defendants and motivation to minimize defendants’ actions.

The 17 members “are enjoined and restrained from engaging in or performing, directly or indirectly, any of the following activities in the Safety Zone.” These activities include associating, intimidation, having guns or dangerous weapons, having graffiti or graffiti tools, use of drugs, use of alcohol, violation of curfew, any trespassing and violation of any laws.

The alcohol provision is somewhat limited, as it “does not apply to possession of alcoholic beverages on the premises of establishments licensed to serve or sell alcohol” nor does it apply to private residences.  In effect, the only prohibition here is against having an open container in public places.

Several of these prohibitions are already illegal.

The big ones are the non-association with other enjoined gang members and the curfew which restricts activities between 10 pm and 6 am unless “(1) going to or from a meeting or scheduled entertainment activity at a theatre, school, church or other religious institution, or sponsored by a religious institution, local educational authority, governmental agency or support group such as Alcoholics Anonymous, (2) actively engaging in a business, trade, profession or employment that requires such presence, (3) in an emergency situation that requires immediate attention; or (4) in the side yard or back yard of his or her own residence.”

In other words, the prohibition would appear to be loitering or otherwise hanging around in public places after 10 pm.

The Vanguard, including a number of interns from Yolo Judicial Watch, attended the entire trial.  In the coming days we will have further analysis and commentary on this decision and what it means.