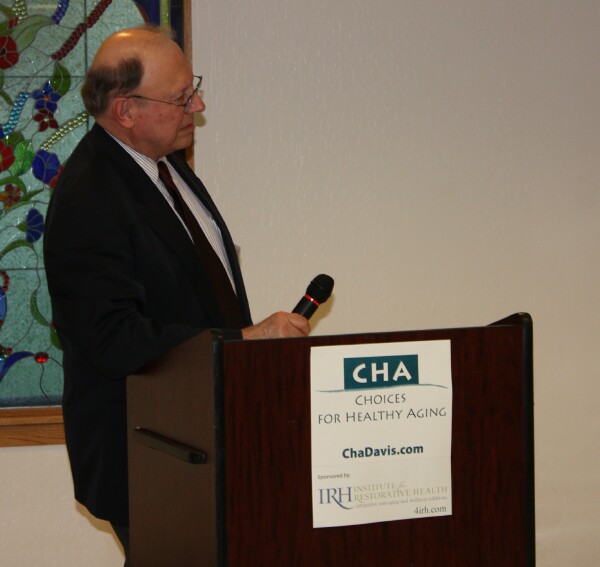 When a long list of Choices for Healthy Aging (CHA) released their co-written op-ed a week ago they were in effect raising a white flag in trying to influence the development at ConAgra.

They write, “Davis may be missing an extraordinary opportunity to once again be a leader in innovative housing. ConAgra, the owner of the largest undeveloped land parcel within city limits, the former Hunt-Wesson cannery, wants to develop that 100-acre site for residential and commercial use.”

“The ConAgra design, while still sketchy, does not appear to provide the range of housing options that Davis seniors desire,” they continue.  “The housing market in Davis that has been totally neglected for 30 years is the Davis senior household, most of whom desire to downsize, with a median income of $59,000 and a paid-for or nearly paid-for home.”

“We greatly appreciated ConAgra’s willingness to conduct two lengthy meetings with CHA representatives, accompanied by senior city staff,” they continue. “However, in all frankness we do not believe that our objectives can be met with the current land use proposal for a ‘multi-generational’ project in which seniors constitute a small minority and the disabled are not specifically considered.”

Embedded in this statement is the admission that they have engaged in a lengthy effort to push their agenda on ConAgra and the city and have failed.  They will thus go the other way.

What the Vanguard has uncovered in its public records requests detailing communications about ConAgra with Councilmembers and City Staff, is a completely broken and dysfunctional public communications system, which is rife for exploitation by an organized group like CHA.

The city uses comment cards in both outreach meetings, to very poor effect.  A total of eight comments were received in this way.

Such a tactic, however, allows a group like CHA to stack the ballot.  For instance, Ken Collier comments, “This city needs more and better ‘senior housing.’ “

Robert Chason, a member of CHA writes, “Seniors need to be consulted and actively engaged in planning and more than just the Senior Commission.”

And Don Villarejo, also of CHA writes, “The discussion of overall design of residential areas of the proposed Cannery Park development failed to consider possible targeted neighborhoods, such as senior-oriented home ownership with important supporting amenities.  The vague responses to questions that sought more specifics was disappointing.”

CHA pushed hard behind the scenes, with little push-back from other groups.

Don Villarejo wrote in a lengthy position paper, “CHA strongly supports a diversity of housing options, serving young families as well as active older adults. That is why we think an age-qualified program, in which 80% of dwellings would serve households in which at least one member was age 55 or older, makes the most sense. The age-qualified designation allows multi-generational families to be included within the 80%. The remaining 20% could be available to younger households including those of any age with disabilities who have many of the same needs as seniors.”

He continues, “Development of the ConAgra site represents an extraordinary opportunity to create something entirely unprecedented: a fundamentally new type neighborhood that is both state-of-the-art and a model for future communities elsewhere. Just as Village Homes was a beacon for ecologically minded, community-building neighborhoods some forty years ago, ConAgra could host an innovative development today.”

However just a week later, it became apparent that CHA had a very different vision for the site than ConAgra (and likely the city).

The group writes, “We sincerely believe we share many design and neighborhood concepts that are entirely compatible but alas, we may have diametrically opposed objectives for what may be in the best interests of the community, particularly seniors. We understand that ConAgra has deadlines and expenses that may be driving your objectives, and we are not unsympathetic. We on the other hand believe that this will be the last, best opportunity to address senior needs in this community for many years to come and are therefore driven by the need to do it right.”

The amazing thing is that while CHA was pushing their agenda, they are part right about ConAgra.  It paid little attention to senior needs and even the last iteration came up woefully short.

The city has put forth a senior housing guideline for new development which includes features such as universal design, but the ConAgra project is remarkably lacking in innovation.

Even with that caveat, the efforts of CHA in this realm and overall, in effecting public policy, have also come up woefully short.

The big problem is that the group was founded not as a community-based senior advocate group, but rather as an Astroturf group that fronted for the Covell Village developers.

The Covell Village developers sought to recast their project as a senior-housing facility for 800 seniors in the lower third of the property following their resounding 2005 defeat.

However, from the start they have had huge setbacks.  First is the tactical error of listing their group’s phone number as the same as Lydia Dellis-Schlosser’s, who is a longtime consultant to the Covell Developers, in charge of Covell Village.  She continues to be one of the spokespeople for the project, and CHA, at the same time.

Once that linkage became apparent, CHA was going to struggle for legitimacy.  But remarkably, they had three more chances at that and failed.

First, there was the attempt to do a senior housing survey, however, CHA opposed that effort when it became clear that they would not be able to control people’s responses, and their councilmember advocates – Souza, Saylor, and Asmundson – voted against the housing survey.

Then independently, the Senior Citizens Commission and Social Services Commission jointly developed the senior housing guidelines, which shied away from supporting the age-restricted large senior housing facility and towards more moderate goals of smaller facilities and universal design.

The biggest failure to date has to have been the greatest opportunity, when CHA hosted a city council candidates forum.  They had a large audience but showed themselves to be transparently “for” their project.

As candidate Jon Li remarked, “The answer to every question was Covell Village.”

The problem for CHA was that not one of the candidates supported their vision – not one.  And even the members of the public, who attended the meeting, were more interested in issues like universal design.

This was an opportunity to show that they were a senior citizens group, rather than just an Astroturf front for Covell, and they failed.

In all likelihood, reality has set in that Covell Village is not possible in the near future.  In fact, in one of their communications they seem to acknowledge this.

Back in early December they signaled their desire to shape ConAgra, acknowledging it required no vote of the public and only three members of council to move it forward.

They write, “CHA has the opportunity to greatly influence the final outcome of the Cannery Park plan, ensuring that a new style of housing for seniors can become a reality within the next two years. Everyone will benefit if we share what we have learned and can convince ConAgra and the City Council members to incorporate a comprehensive senior housing neighborhood component into their development, implementing the CHA model.”

They don’t depart from Covell completely, writing, “Our original commitment and vision for the Covell site remains strong.”

However, what is now clear is that their efforts have failed despite having support of three council members for a good chunk of time, and despite the flawed public outreach system that enabled an organized group to exert disproportionate influence.