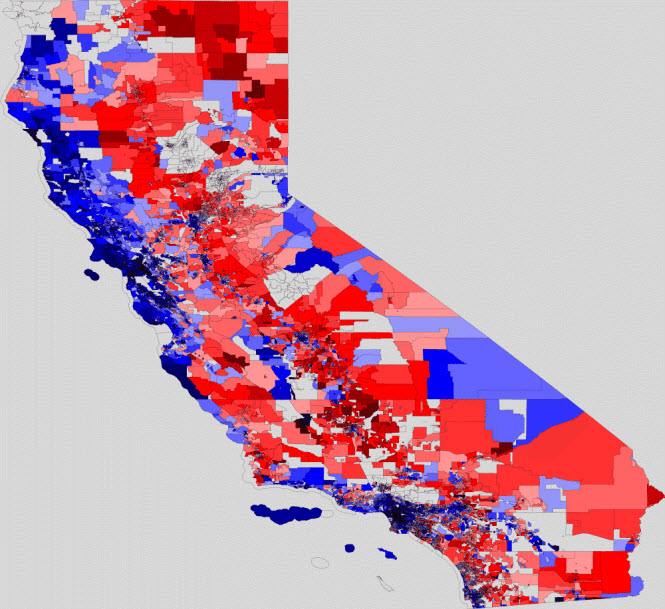 There is an old adage in politics that I rarely subscribe to which is to be careful what you ask for.  After all you would be paralyzed if you adhered to that principle, unable to act.

Nevertheless, Republicans and some “good government” Democrats and Independents have been pushing the notion of the California redistricting panel hoping that perhaps there will be more competitive Congressional and Legislative districts in California.

As the Sacramento Bee reports this morning, “Victory no longer is sweet for California Republican Party interests that helped strip the Democratic-controlled Legislature of the right to draw political districts.”

The Panel is made up of five Democrats, five Republicans and four Independent or minor-party voters.  Three votes from each bloc is required to approve a redistricting map.

The Republicans are crying foul “over the hiring of Q2 Data and Research to provide expertise in drawing 177 legislative, congressional and Board of Equalization districts.”

“We haven’t seen the final results, but they certainly have opened the door to wide-ranging suspicion, and that defeats the purpose of the process,” said the Republican State Chair Tom Del Becarro.

Redistricting reform was one of the proposals championed by Governor Schwarzenegger as part of the backlash against the lines drawn by legislative leaders back in 2001 to protect incumbents.

Republicans have claimed off and on the drawing of the districts distorts Democrats power.  The problem is when you look at the statewide sweep by the Democrats in 2010, in a Republican year nationwide, and consider the fact that since the 1994 election when Republicans last won statewide, the only major statewide race won by a Republican was Arnold Schwarzenegger in 2003 and then again in 2006.

The news for the Republicans statewide has been bad for 15 years.  It got worse when a poll released after the election showed broad swaths of voters opposing the Republican core agenda.

And now as Dan Walters reports this morning, it gets even worse in two ways – demographically and by voter registration.

Writes Mr. Walters, “the results of the 2010 census that confirmed anew the state’s incredible demographic and cultural change. California’s  rapidly aging white population, an overwhelming majority a few decades ago, has now dropped to scarcely 40 percent, while the rapidly growing Latino and Asian populations are now more than 50 percent.”

Second is the voter registration numbers, which show “Republicans dropping to 30.9 percent, their lowest level in recorded history, while rival Democrats maintained their share at about 44 percent.”

The Republicans loses have not gone to the Democrats, but rather to the independents who form about 20 percent of the electorate.

Dan Walters writes, “It’s not a stretch to say that the Republican Party, which once dominated California politics  and was very competitive into the 1990s, has devolved into a party of rapidly aging white people, and as they disappear, its fortunes may sink further.”

Dan Walters argues that there is more to the Republican decline than just demographics.  He cites the demise of the Southern California defense industry, coupled with the inflow of immigrants, which shifted the politics of LA County from party-neutral to strongly Democratic.

But there is more, he argues.  The Republicans have moved right as the state has move left.

“What was once a middle-of-the-road party that dominated California as Democrats paddled on the left reconfigured itself into a right-wing party,” he writes.  “The party’s stridency on taxes, illegal immigration, abortion and other hot-button issues alienated both white moderates – most noticeably in the suburbs – and the surging numbers of Latino and Asian voters.”

People that are worried about the new primary system should realize all that will mean is that there will be two Democrats running for November elections.

And it is really worse than for those “good government” types.  Look at a typical electoral map and you will see the exact problem with drawing competitive districts – California is electorally fragments.  You will see a deep crease of Democratic support moving from LA up the coastline.  You will see a veer of Democratic support up the I-80 corridor to Sacramento County.  And you will see Republican support in the rest of the valley, the mountains, and the desert region.

At the margins, redistricting may matter in creating an extra seat or two for the Democrats or drawing more safe districts for incumbents, but at the core, even an equitable drawing of the maps is going to produce a heavily Democratic map and one with a lot of non-competitive districts.

Why?  Because that is how California looks naturally.

62 thoughts on “The Fight For Redistricting Runs into a Huge Problem for the GOP: Reality”