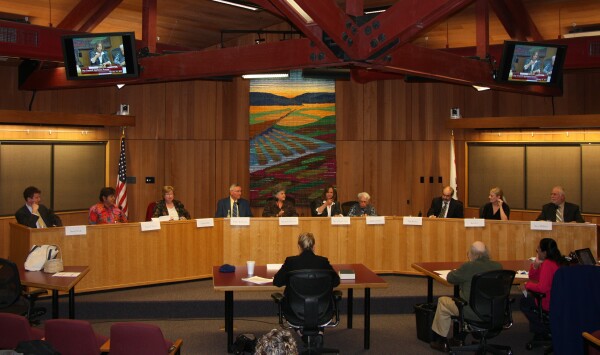 Given my pointed criticism of Bob Dunning recently, I think it is only fair to point out that he is absolutely correct when he writes, “The spirit of openness and fair play that we’ve come to expect when debating political issues in the City of Davis was clearly lacking in the recent League of Women Voters ‘forum’ on Measure A.”

Why is that? Because they apparently went out of their way to invite only those speakers who supported Measure A and “specifically declined respectful requests from the ‘No’ side to have a seat at the debate table.”

Rich Rifkin, in a comment on the Vanguard yesterday afternoon, added context, “Through emails, he and I discussed this issue late last week. I had been contacted by Tom Randall, and Tom showed me his exchanges with Jean Canary of the DLWV. After I looked into what Randall had claimed happened to him (and to Ralph Finch, who also wanted to participate in the debate), I passed the story on to Bob and he did his own research and wrote that column…”

The League only invited School Board member Sheila Allen and former California Superintendent of Public Instruction Delaine Eastin – both of whom were strong supporters of the measure.

In fairness, we have not yet contacted Jean Canary, though we intended to.  However, we do have her response to Mr. Randall in which she wrote, “The Board of the Davis League of Women Voters  has discussed our Measure A  forum and decided that there is a lack of information explaining the need for Measure A  to the Davis voters.”

She added, “The League has as one of its goals the education of the voters, and we decided the information format will allow the public the most opportunity to ask questions about their school district’s funding.”

The truth is that the League of Women Voters in Davis has been a problem for quite some time.  It pains me to have to write this, given the respect that I have for the organization’s history and the likely grief I will receive for writing this.

However, from our standpoint, the League does not deserve the preeminent status that earned them the only official forum for the council candidate appointment process.

As I noted at the time, “Without disparaging the work of people who have volunteered their time, I really dislike the format of League of Women Voters forums.  Particularly with ten candidates, we had ten three-minute introductory statements and ten two-minute closing remarks.  That’s 50 minutes of a two-hour event to scripted comments, rather than questions.”

Nothing about the most crucial issues facing the city.  That should have been a clear indication that the League is out of step with what the burning issues are in Davis.  The better questions came from the public.

This was not an isolated incident.  My comment last spring was really that the League of Women Voters forum was highlighted as the centerpiece forum, it was shown on TV and it was promoted, but it was the least informative of the ten or so forums that the candidates for city council had.

But, bad as those forums were, they were at least fair.  When they had debates over Measure R and Measure Q, at least they had David Musser and Jerry Adler up there as opposition.

How you can have a candidate’s forum, a primary candidates forum or a forum about a parcel tax measure, without opposition, is beyond me.  I think this should be the death knell for allowing the League to be a centerpiece and focal point of the forums.  Now, whether there is anyone with actual authority that can change things is beyond me.

I have nothing against Ms. Allen or Ms. Eastin, they are great ladies who are deserving of respect in our community, but we needed to have a debate with both sides of the issue fairly and equally represented.  And that did not happen.  And once again, this will come back to harm the very cause that the League was hoping to promote.

Share:
Previous : Just a Week Until the Council Selects Fifth Councilmember
Next : Commentary: The Continued Need For Police Oversight

27 thoughts on “Has League of Women Voters Outlived Its Usefulness?”