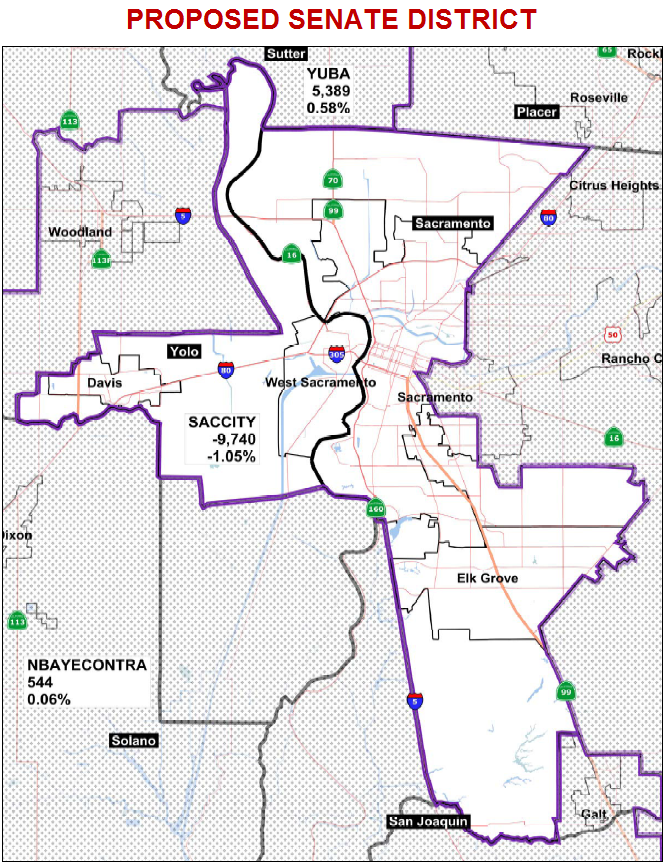 Yolo County officials are necessarily concerned that the county is currently slated to be cut into thirds, separating, of all things, Woodland from Davis, two communities just seven miles apart.

“The maps could disenfranchise the interests of Yolo County citizens,” wrote Supervisors Jim Provenza and Don Saylor, speaking on behalf of the county Board of Supervisors in a letter to the California Citizens Redistricting Commission

Yolo residents “share far more common interest with one another than with jurisdictions outside Yolo County,” they added.

An article in today’s Sacramento Bee by Jim Sanders somewhat mocks the situation.

“Don’t break out the champagne,” he writes after suggesting the two would be “cuddled” into some sort of municipal “marriage.”  “The plan would join a bike-riding suburb with an urban metropolis, a university town with a state capital, a slow-growth community with one that has welcomed home builders with open arms,” he continues.

Mr. Sanders goes on to write that both cities would prefer to avoid the coupling.  He goes on to quote Supervisor Provenza stating, “Nothing against Sacramento, it’s a great place, but the law is really supposed to keep communities of interest together – and Yolo County is a tight community.”

Supervisor Rexroad, a strong defender of the redistricting commission and now of the plan, throws in his own digs.

“Davis people are unique,” he told the Bee. “They would say that the comparison needs to be, ‘Are Sacramento folks good enough to be Davis folks?” “

Mr. Rexroad added, “You have to draw the line somewhere, it’s just a question of where – and then people are going to complain about where it is.”

Stan Forbes last week told the Vanguard that the plan made sense but never got back to us to explain why.

He told the Bee that the districts had to be equal in population and therefore, “Davis had to be combined with a much more populous area.”

Therefore, he said that pairing Davis, Sacramento and West Sacramento made sense as opposed to the current arrangement, with much of Yolo County joined with Eastern Solano county.

This, of course, is not the only piece to the puzzle.  Despite derisive comments to the contrary, we do not believe that Davis or Yolo County are the center of the universe.  However, since it is the area we cover, we do tend to focus on the concerns about dividing up the influence of Yolo County into three parts.

But there is more to this picture than just that.

The consensus that seems to be forming is that there will be more competitive races now, it will give the state a higher profile in congress, and that Democrats could pick up three to five seats – ironically, since the Democrats opposed redistricting.

An LA Times article from last week makes the prediction of three to five seats.

On the other hand, as UC Berkeley political science professor Bruce Cain said. “You’re going to have something like up to a quarter of the [California] seats being possibly competitive.”

And yet, as Bruce Cain points out, while this should help the Democrats overall, it gives them tougher races.

“Even though everybody is saying this is a pretty good Democratic plan, if you took a poll of the Democratic incumbents, I can assure you they are nervous,” Cain said. “Because a lot of them have tougher races.”

The LA Times reports further, “The party’s potential gains might surprise Democrats who opposed the citizens redistricting commission  as taking power away from state officials, [Sacramento-based Democratic Consultant Paul] Mitchell said. “But I don’t think that there’s any way the Democratic Legislature and Democratic governor would have been able to create a plan that created five Democratic pickups. They wouldn’t have been able to pull it off,” he said.

And then the LA Times quotes our own Matt Rexroad.

“There are three to five Republican members of Congress who don’t return,” he said, also noting that the lines are subject to change.

“We will see more competitive races, without a doubt,” Rexroad said. “Once these seats are a little bit more exposed to the waves that go across the country … you will start seeing some changes.”

But, will this new law result in any changes?  For that we go to veteran commentator Peter Schrag.  He wrote an op-ed a week ago warning people not to expect “any magic” and added that ” ‘bold’ reforms are rarely immune to the law of unintended consequences, and California’s redistricting change is no exception.”

The problem, as Peter Schrag points out, is that people want their communities kept together and yet, as he cites Bruce Cain, “increasingly we sort ourselves out geographically; we move to places with people who tend to be just like us.”

This has been my contention all along.  Look at a map of California and show me where you are going to draw out competitive districts.

Mr. Schrag writes, “It’s true, as the reformers argue, that one major objective is empowerment of groups and communities that the self-serving maps drawn by politicians often sacrifice to the protection of incumbents and the maintenance of safe seats for each party.”

He adds, “But an equally important hope was that more competitive districts would be created, and that this in turn might lead to more moderate candidates because they would have to appeal to a broader cross-section of voters. This was always more a hope than a certainty, though, because under Proposition 11 the commission is not permitted to look at party membership. So, though it might be geographically possible to create politically competitive districts, the commission is blinded by the law from trying.”

The result is, despite the LA Times article, “There will, of course, be one or two more competitive districts in the state Senate and Assembly, and maybe a couple in the House — that’s almost a no-brainer after the safe seats that were created by the parties in 2001 to protect their candidates — but not nearly as many as the reformers hoped for.”

The real question I have is, is creating competitive districts good enough reason to split Yolo County into three parts?

I understand people want competitiveness, but I also remember my cousin, a political scientist who argued almost counterintuitively that competitive districts make for less representativeness, because in the end if you have a district where 80 percent of the voters are Democrats, and they elected a Democrat, you have a well-represented constituency.  However, if you have a 51-49 district that narrowly elects a Democrat, then 49% of the constituents are SOL, as they say.

It is a difficult argument to get your mind around, but in the hyperpartisan Washington or even Sacramento, there is a strong element of truth there.  And so if you had 80 districts that were 80-20, you would never have competitive races, but you would also have constituents well represented by their representatives.

Accountability does not have to come from outside of a political party.  It could come from within the district as well.  It would make primaries all the more important.

I know not everyone buys into this scenario, it was a controversial view, but there is something to it.  And as we see districts carved up and communities separated, you have to wonder whether this is the formula that represents most interests.  Or whether it is simply a means to subsume the interests of rural and suburban districts into urban districts that figure to dominate them.

4 thoughts on “Redistricting Plan: Bad for Yolo; Good for Competitiveness and Democrats?”