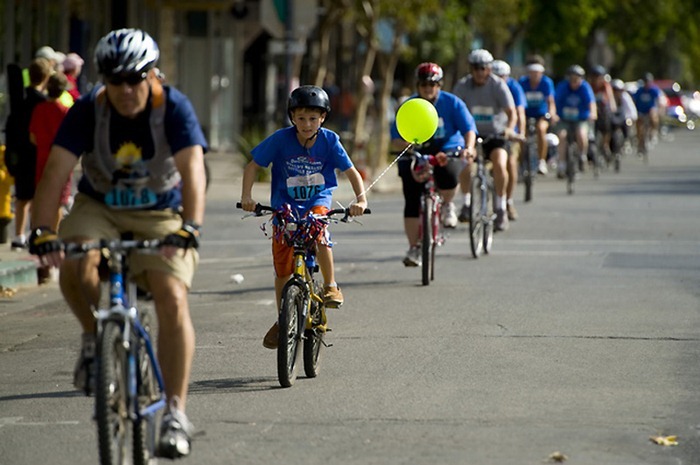 “We’re looking for a few good volunteers,” said Bicycle Parade volunteer coordinator Dyke Mundy. “We will have over one thousand bicycle riders in our effort to break a Guinness World record.  But we also need about 100 volunteers for the day of the event, and for the days leading up to the event.”

On October 2, 2011, the Davis Odd Fellows Lodge will lead an effort to break the Guinness World’s record (set last October in Davis) for the longest single line of moving bicycles.  In 2010, the Guinness World Record was set at 916 bicycles moving in a single line.  The effort this year hopes to shatter that record with 1,200 or more bikes.

“While most folks will be registered to ride in this record-breaking and fun event,” said Mundy, “we need volunteers to staff many and diverse jobs.  On the day of the bike parade we need folks to monitor the course and maintain the temporary street closures.  We also need people to manage the bike staging area just before the starting line.  We need volunteers to help with the family festival in Central Park immediately following the bike parade.  And on the days leading up to the bike parade, we need helpers to put together the packets for the riders and to hand them out.”

“Volunteers can sign up on line and are encouraged to do so now”, said Bicycle Committee spokesman Dave Rosenberg.  “We offer folks an easy and user friendly web site.  Folks can sign up, electronically, for the day or days they wish to work, the hours they prefer, and the job or jobs they would like to do.”

The website address is www.worldsgreatestbicycleparade.com and once on the site, folks just need to click on the “Volunteer” link and follow the simple directions to volunteer to help during the bike parade or on the days leading up to it.   Visitors to the web site are encouraged to visit the “FAQ” page where they can find answers to frequently asked questions about the bicycle parade, as well as the parade rules and other useful information.

On October 2, the starting line will be in front of the Davis Odd Fellows Lodge at 415 Second Street in Downtown Davis.  The parade will officially start at 10:02 a.m. on 10-2.  Bike riders will be asked to slowly traverse an easy-going, 4 mile route on city streets, closed off to car traffic during the parade.  It should take bike riders about one hour to complete the parade route.  The parade will be followed by a family-friendly Festival in Central Park, complete with food and drinks, and beer and wine garden, music, and entertainment for the children.

Registration in the parade is done on line and is open to the general public with a minimum age requirement of 7.  The Odd Fellows invite bike riders from throughout Northern California to join the parade, break the record and help raise money for the Davis Schools.  A bike must travel the entire parade route, start to finish, to count.  “Tandem bikes can participate but even though they carry two riders, tandem bikes only count as one bike toward the record.  Persons who are disabled or who otherwise require a three-wheel bicycle or other specially adapted bicycle are welcome to register and participate, and will certainly be counted toward the record,” said Bicycle Committee spokesman Rosenberg.

One thought on “Volunteers Needed For Bike Parade”