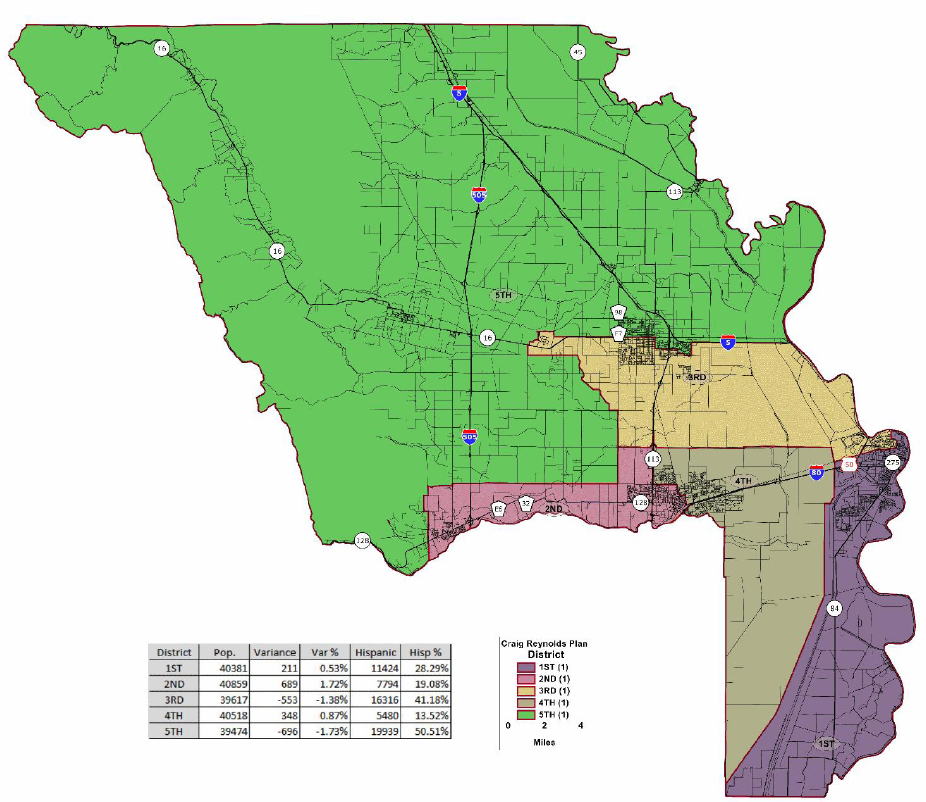 Last week, the Vanguard expressed concern that redistricting would result in the loss of commitment for Ag Preservation, as the Board shifted the traditionally rural district represented by Duane Chamberlain to a Woodland-based district.

Supervisor Matt Rexroad argued that there were “too many ‘facts’ in this article” that are “wrong” to respond.   But later added, “The 5th District has more than half the “voters” come from Woodland currently. The status change you fear happened ten years ago. “

He also reiterated the argument, “People are what counts in redistricting. It is not dirt clods.”

This followed Don Saylor’s argument expressed at the meeting last week, that this was about drawing roughly equal district boundaries based on the principal of one person, one vote.

The Vanguard spoke with Supervisor Jim Provenza, who clarified his perspective on this matter.

“Having a farmer on the board is going to be extremely unlikely,” Mr. Provenza said.

“By doing that it will be 70 percent city of Woodland residents and only 30 percent rural,” he said.  “So it’s basically turning it into an urban district.”

Two other maps, one that Frank Siefferman, a former Supervisor, drew and one drawn by Richard Harris and Supervisor Provenza, both maintain the rural district, keeping both Winters and Knight’s Landing in the 5th district.  He sees that district as about 40% Woodland residents and 60 percent rural residents.

“There’s an opportunity for a farmer or a person with a rural background to get elected,” he said. “In the new district it’s going to be extremely unlikely.”

The Vanguard asked whether this was political or just the way it happened to work.  Mr. Provenza was not sure, though he noted that Woodland had wanted two supervisors, and under this configuration they should be able to get that.

“Don [Saylor] had said that you couldn’t do a rural district, because the math didn’t work for one person, one vote,” Mr. Provenza said.  “That’s not true at all because the map that I drew was the same in terms that each district had about the same number of people.  The deviation in each district from the perfect number was less than two percent on all of the proposed maps.”

He explained that, practically speaking, you have to deviate a certain percentage because it is impossible to draw exactly equal districts, but he pointed out that all of the proposals were well within the law.

“One to two percent deviation is pretty normal,” he said.

The side-by-sides of the map statistics bear out the point that Mr. Provenza is making.

One of the big questions going into this process was whether Davis would retain two seats, but that turned out not to be a big issue, as Mr. Provenza pointed out that all of the configurations had two Davis supervisorial seats.

“There’s really no way, with the numbers in Davis at this point, that you wouldn’t have had the two Davis supervisors,” he said.

His preference would put a little bit of Woodland, near the Springlake area and a little north of there, into the Fourth District, where Mr. Provenza is the representative.  He argued that this would have been more work for him, but he would have been willing to do that to maintain a rural district.

“You have to do that because the only way to have enough voters in the Second District is to take them out of the Fourth,” he said which would then require going up to Woodland to have enough in the fourth.

Instead, they kept Woodland together and pulled Winters into the Second District.

“The district that we were pushing was pretty much historically very similar to what Betsy Marchand had had,” he added.

The rural district goes back quite a ways, although as Mr. Provenza correctly points out, if you go back far enough, you end up with five rural districts.

The key question is whether this will mark a shift away from the rural-based politics and the protection of agricultural land as a guiding force in Yolo County politics.

However, that is not really the point, he says.  It really goes to having someone with the kind of background, the knowledge and experience in farming and agricultural issues on the board.

“It’s just not quite the same when you’re sitting there in a meeting and you start talking about some issue,” he said.  “Duane can tell you when you plant the crops.  He can tell you when someone tells you something about pesticides that make no sense in the real world.”

“And he can relate to the people who are out farming the fields,” he added.  “Without that you don’t have that diversity on the board – you definitely lose something.”

The question is whether Yolo County will lose something as the politics and districts shift away from a rural farming base.

Share:
Previous : School Starts Today: Be Sure To Pack Lunches, Snacks, Books, Pencils, and Oh Yeah, the US Constitution
Next : Sunday Commentary (on a Monday): An Old Fashioned Pitch-Battle Over Growth and Land Use