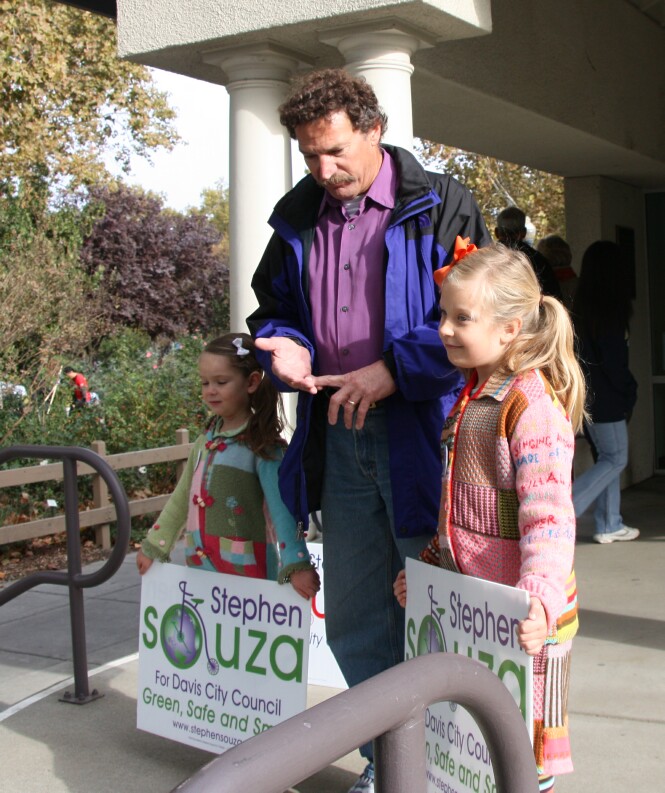 A few minutes after Mr. Souza and a small handful of supporters took off on their bicycles to tour the city, four fire engines pulled up to the Davis Bicycle Hall of Fame.

According to Mr. Souza, supporters were invited to join the bike ride with stops throughout Davis that “represent Promises Made and Promises Kept in Souza’s last seven plus years on the Council. Stops along the route will also highlight Souza’s vision of accomplishments yet to be fulfilled.”

He said all his decisions in his years in public service are based on his heart, his mind and his soul.

“I make every single one of those decision in a way that makes this town better than what it is,” he said.  “Or at least seeks to not create any harm in that action.”

“As we move along the bike route,” he said, “I’ll point out many things like the green, safe and smart.  Green’s the environmental aspect along with open space protection along with sustainability.  The safe part is not only the public safety that we know from the police and fire, but it’s also the health that we have to protect.”

“The health in this community means surface water, means wastewater discharge, which has the overlap of affecting not only the environment but affecting many other species along the way.”

The Vanguard asked Mr. Souza about his campaign finances, in particularly whether he would be taking money from city employees, specifically the firefighters.

He did say that, unlike in the past, he would not be taking bundled contributions from 40 firefighters.

At the same time, he said he would not take that money, he argued that money did not impact his votes and he found the idea that he votes a particular way due to the money he received as “insulting.”

He said that retirees were his largest contributors in the past, and that, in fact, the biggest sum of money came from himself. 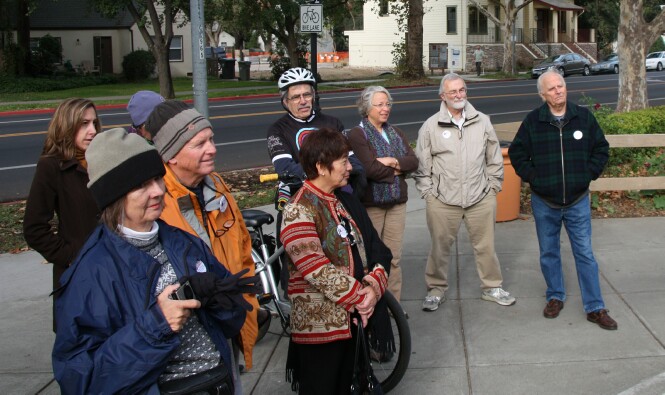 Two of the biggest issues for the next campaign will be the water issue in the form of the surface water plan, which Mr. Souza called “the least costly, and most environmentally superior alternative path that we can go down.”

Mr. Souza made the news last month, opposing efforts to put the water rates to a referendum.

In a letter, he said that he speaks up because he must.

“I am a citizen of this community first and foremost, secondarily I am a representative of the citizens of this community and thereby have a fiduciary responsibility to save the ratepayers as much as I can in what we pay for water in our community. It is my duty to speak out when I believe that the ratepayers will be harmed on a matter that I have knowledge of,” he wrote, believing that there were paid signature gatherers “misrepresenting the facts” of the surface water project.

The other huge issue will be the city budget, including the need to address both unfunded liabilities and unmet needs.

“Those are things that weren’t addressed in the past,” Councilmember Souza said. “They weren’t required by law and most were ‘pay as we go,’ but as you’ve seen, we can’t do that anymore.”

He is also looking at ways to achieve a more diversified economy and sales tax base that moves away from being heavily reliant upon automobile sales.

He said, “When there is a downturn in the economy like we’re seeing, fewer cars are bought. To have all your eggs or a vast majority of your eggs in one basket is not a smart fiscal thing to do.”

That leads into a third huge plank of his campaign, the need to develop solar power.  One of his big issues has been pushing solar farms around the town to provide energy needs that can continue to help reduce Davis’ carbon footprint.

While Mr. Souza pointed proudly toward open space and mitigation that allowed areas like the Mace Curve to remain development-free, for the most part, past ideas of development needs were absent in Mr. Souza’s current discussion.

Four people have now announced their running for three Davis council seats, with Dan Wolk and Brett Lee previously holding announcements events, and Sue Greenwald has told the Vanguard that she will run again.