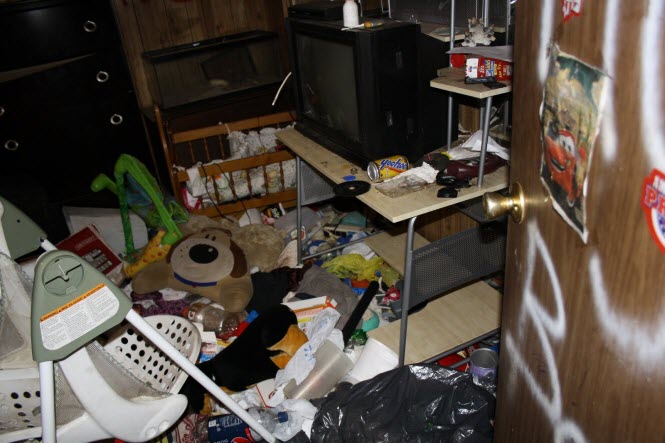 It was an all too familiar story that appeared in Monday’s Sacramento Bee which explored the reasons why Child Protective Services decided to return a child to her parents, despite all common sense and reason that suggested they do otherwise.

The specifics in this particular case are horrific.  A one-year-old baby drowned in the family’s backyard swimming pool in late 2006.

The house, the picture of neglect, was infested with roaches and had numerous health violations leading city inspectors to cite them “for an unsecured pool fence, the lack of a door closing off the garage from the pool, and a host of other health and safety code violations.”

The tragedy is magnified by the fact that three years later, the sister of the first child was removed and then returned to the home, and is now dead as well, a victim of medical neglect by the parents.

The parents pled no contest to child endangerment charges in July and were then deported.

The Bee writes, “What the records don’t explain is how the agency made the decision to return the child to care that led to her death.”

“County officials say they cannot discuss the case or the records because of confidentiality laws,” they continue.

This is part one of the problem that we have noticed throughout government – confidentiality laws were created to protect children but have been used to protect official misconduct from being exposed by investigative news reporters.

But the Bee asks why the agency made the decision to return the child – and the records that they do uncover are troubling.

The Bee spoke with Ed Howard, senior counsel at the Children’s Advocacy Institute in San Diego, who reviewed Yeinira’s file at the request of The Bee.

“If we take them at face value – that there is no documentation for reuniting this child with a very troubled family – then this is a fiasco,” Mr. Howard told The Bee. “You can’t do this job without documenting your reasons for making such a decision.”

The Bee never does find the answers to the questions about why the decision was made to return the child to her parents, but they are probably looking in the wrong place.

The Sacramento Bee focuses on the specifics of the situation.  CPS may well be incompetent.  Likely, they are overworked and underfunded, a condition that was probably already chronic but exacerbated by the recent economic turmoil and budget crisis.

However, the real problem goes well beyond the specifics in this case and it has to do with the default setting in the system, which seeks almost at all costs to return children to their biological parents unless CPS and the court can find a tangible and provable reason to keep them from the children.

Now perhaps in this case, CPS should have been able to find those reasons.

The Bee reports for example, “Neighbors, attorneys and a social worker who had contact over the years with the Melchors, an immigrant family from Mexico, said the family needed help. They said Elizabeth Melchor seemed incapable of caring for her children and, according to court records, Jose Jaime Melchor physically abused his wife.”

Moreover, the Bee uncovered that “five reports of alleged abuse or neglect involving the family were made to CPS prior to Yeinira’s birth in July 2006.”

State laws need to be changed to protect children more.  Right now, even after removal from the home, the agency works to reunite children with parents – even parents with a long history of problems.

From my perspective, having been on the foster end of the system – it is difficult to remove children from their parents.

In one case that we are familiar with, the child was removed from the birth mother at birth, her mother testing positive for amphetamines and marijuana.

The mother, unbeknownst to the foster parents, had a long criminal history of substance abuse, but CPS was going to turn the child back to her “care” after only a year of staying clean.

The child was only a few weeks away from going back to her mother, when police entered the mother’s apartment in the early morning hours last year.  At that point, the child was in the reunification process, on the last day of a three-night stay.

The police incident ended that process.  But remarkably, it did not kill the mother’s chance for reunification – it only lengthened the likely process.

Had the mother gotten back to her programs and remained clean, she still could have gotten her daughter back.

However, about a week later she would be arrested for drug possession.  She would then be arrested again early this year.  She eventually would take a plea to five years in prison (for possession of meth) and only that ended her process, and only because she chose not to contest the termination of parental rights.

How close did that child come to returning to her mother?  About two weeks of keeping the mother her nose clean.

But should it have gotten that close?  The history of the mother reads like a long and tragic novel.  She has about a nine-year criminal history, mostly minor possession charges, with some domestic battery and petty theft thrown in.

Her previous child had been removed from her custody and adopted by the paternal grandparents.  Her first child died as a three-month-old as he slept on his mother on a couch.  The circumstances of the death were deemed suspicious, the baby was apparently overmedicated and this is what got the mother on CPS’ radar in the first place.

This is the history of the mother and yet, she could have gotten her child back.

More ominously, despite the good work the mother had done, the CPS social worker had become suspicious of certain things and for the last three or four months she had made a series of surprise visits trying to catch the mother in the act of something.

This occurred in Yolo County with a well-funded CPS that has a good reputation.  Sacramento’s CPS has a very dubious history.

The question that we must ask is why it is so difficult to put the welfare of the child over the parental rights of the parent?   That is a question we are going to look into.

However, the system clearly must change.  One person familiar with that system told me recently that efforts in the past have been made to correct these sorts of problems, only to run into roadblocks many times, I was told, “by entities you will likely be surprised at.”

More on this later this year.

2 thoughts on “Changing the Laws to Protect Children”