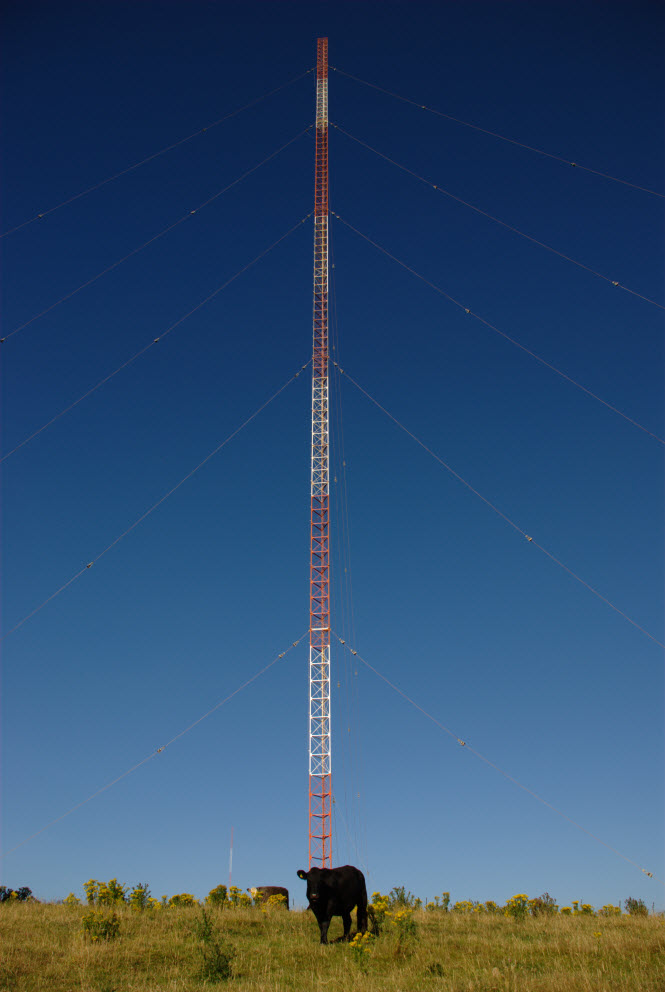 On December 6th, the Davis City Council will consider a resolution by the Open Space and Habitat Commission strongly opposing a proposal by Results Radio, a Santa Rosa radio conglomerate, to build a new tower at the Yolo County Central Landfill.  The proposed tower, at 365 feet, will be taller than the Statue of Liberty.  This massive structure will be 30 feet at its base and have three extremely bright white strobe lights (one at the top and two at the 200 foot level).  These strobe lights are required by new FAA regulations, and would create much more visual pollution than any other tower in Yolo County. Each of the three strobes would flash 40 times per minute, 24 hours a day at an intensity of 20,000 candelas during daytime, dawn, and dusk, and 2,000 candelas at night – creating unacceptable blight on the northern border of Davis.

Wildlife experts have concluded that because the proposed tower is located in the heavily-used Pacific Flyway adjacent to the Davis Wetlands Project and the Vic Fazio Wildlife Area, the disorienting effects of the strobe lights on birds would cause unacceptable bird deaths due to numerous bird collisions.  To add insult to injury, Results Radio wants to locate their visual and environmental blight in Yolo County, but move their offices and jobs to Sacramento!

Results Radio has been relentless in their pursuit of dumping this enormous radio tower next to Davis.  First, they tried a site near North Davis Farms/Northstar, then they tried a site near El Macero/Willowbank, and then they made their first attempt to locate at the landfill near Wildhorse/Mace Ranch.  Each time they were unsuccessful.  They finally withdrew their FCC application to relocate KMJE (FM 101.5) from Sutter County to Yolo County when the FCC refused to approve their tower at the landfill site.

But now, despite strong opposition from environmental groups including the Yolo Audubon Society, Tuleyome, and the Sierra Club Yolano group, as well as numerous Davis residents, they are back for a second try at the landfill.  After apparently gaming the FCC regulatory process, they quietly flew a FCC reapplication in under the radar, and are now seeking discretionary approval from the Yolo County Board of Supervisors to renew their expired building permit.  This hearing will be held at 9 am on Tuesday, December 13th in Woodland.

It’s time for the City Council to send an unambiguous message to Yolo County that this proposed tower is unacceptable anywhere near Davis.  We urge the Council to vigorously oppose renewal of the Results Radio building permit by the County on the following grounds:

1)     The Open Space and Habitat Commission has passed a resolution opposing this enormous tower and any future towers near the wetlands.

2)     It violates the historic “Greenline” Memorandum of Understanding between Davis, Woodland, and Yolo County which calls for the exclusion of all urban uses between County Roads 27 and 29.

3)     It violates the Pass-Through Agreement between Davis and Yolo County which gives the city the authority to exclude urban uses within the Davis sphere-of-influence (which includes the landfill).

4)     It violates Federal guidelines from the U.S. Fish and Wildlife Service regarding the location of towers to minimize wildlife impacts, which state that towers “should not be sited in or near wetlands, other known bird concentration areas (e.g., State or Federal refuges, staging areas, rookeries), in known migratory or daily movement flyways, or in habitat of threatened or endangered species.  Towers should not be sited in areas with a high incidence of fog, mist, and low ceilings.”

5)     It would create highly intrusive visual blight that will ruin the agricultural vistas and dark skies throughout the entire area.

6)     It would cause huge quality-of-life impacts to all the surrounding farms and residences along the north and northeast edge of the city.

Davis has invested a tremendous amount of effort and resources in protecting both the agricultural heritage and the natural environment and habitat around the outskirts of the city.  If Yolo County is allowed to advance the proposed Results Radio tower, it would make a mockery of these many efforts.

During the first attempt by Results Radio to build at the landfill, the City made the determination that the proposal is in violation of the Pass-Through Agreement.  Astonishingly, City Staff  incorrectly asserted that this profoundly damaging radio tower proposal did not violate the “spirit” of the agreement because the effects on farming per se would be “negligible”.  What about adverse wildlife impacts?  What about the “spirit” of the Greenline MOU and the Pass-Through Agreement? What about protecting Davis’ quality of life impacted by the visual blight created by this tower?

Staff’s narrow, pro-urbanization interpretation of this vitally important agreement is not only incorrect, it puts us on a slippery slope eroding the integrity of the Pass-Through Agreement.  This should not be tolerated by our Council.  This could lead to Davis having a regional concentration of antenna towers on its borders.

Please call or write the City Council regarding this very important issue and urge them to:

1)     Oppose the locating of the Results Radio tower anywhere near the wetlands or in the Davis sphere-of-influence.

2)     Accept the Resolution of the Open Space and Habitat Commission by adopting the recommendations and its policies.

3)     Invoke our right under the Pass-Through Agreement to veto this urban use which lies within both our sphere-of-influence and the protected Greenline.

Please also attend and testify at the public hearings on December 6th for City Council and on December 13th for the Board of Supervisors. Your written input to the Supervisors is needed as well.  Please help protect the birds of the wetlands and our quality of life.

For more information contact the Davis Coalition for Good Planning via Eileen Samitz at emsamitz@dcn.org or 756-5165; or Pam Nieberg at pnieberg@dcn.org or 756-6856.

Share:
Previous : Study Shows What We Already Knew: Term Limits Do Not Work
Next : Strong Opposition to Notion of Split Schools in South Davis