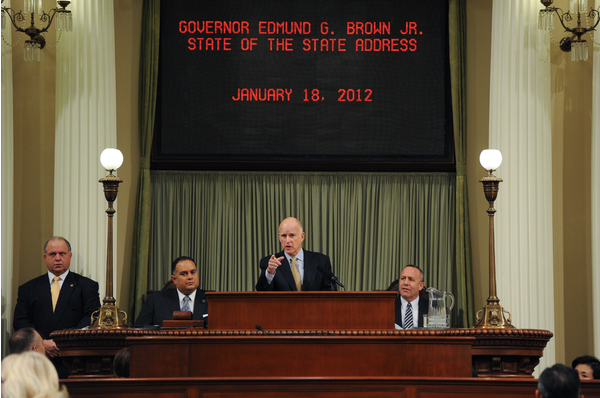 However Other Groups Continuing to Back Millionaire’s Tax

Governor Brown has had to fight not only the right on his tax initiative, but his own base in the form of at least two competing measures.  This week, however, the governor gained key support as the California Teacher’s Association’s State Council of Education, comprised of 800 elected educators from across the state, endorsed the governor’s tax plan at their quarterly meeting in Los Angeles on Sunday.

“Educators know that California cannot continue to cut its way out of ongoing budget problems. We also know that not everyone in California is paying their fair share, and that’s why we are supporting the governor’s tax proposal, which taxes the wealthiest Californians in order to bring additional revenue to our schools, colleges and other essential public services,” Dean Vogel, president of the CTA and a Davis resident said in a statement on Sunday.

“The governor’s initiative is the only initiative that provides additional revenues for our classrooms and closes the state budget deficit, and guarantees local communities will receive funds to pay for the realignment of local health and public safety services that the Legislature approved last year,” he continued. “It’s time to put California back on track and this initiative is the best way to do that.  It’s the right choice for our students and their families, our communities and our state.”

Polling analysis released last week from the Public Policy Institute of California shows strong support by the public for the tax measure as a way to fund education.

68% percent of likely voters, including 53% of Republicans, favor the tax measure.

Education is clearly the driving force behind that support, as John Myers from KQED noted: “As several other questions in the poll make clear, it’s probably not Brown’s proposal that they love so much… but rather the consequences of its failure that they hate.”

If the tax measure fails, the governor has proposed automatic cuts to education.

“There’s no question that if this were just a general tax increase,” says PPIC president and pollster Mark Baldassare, “that you’d have a whole different response.”

The governor has proposed to get the revenue largely through two different types of taxes – one an increase in the income tax on the wealthy and the other an increase in the state’s sales tax.  The initiative would temporarily increase the state sales tax and the personal income taxes of wealthy Californians, with the new revenue going to K-12 education.

“The challenge the governor faces with his tax initiative is that one generally popular tax increase – raising personal income taxes on the wealthy – is paired with one generally unpopular one – raising the state sales tax,” Mark Baldassare notes.

Writes Mr. Myers, “Undoubtedly, the governor’s most liberal supporters will see that kind of poll data as proof that any one of the other tax initiatives that are out there is better than his. And Brown has yet to dissuade all of those groups from launching their own campaigns in competition with his.”

That is exactly the problem that the governor faces.  Restoring California, the coalition of educators and community leaders, is sponsoring the Millionaires Tax initiative for the November ballot.

This week their campaign has won key new adherents, as well.

“We are excited that our initiative to provide permanent funding for public education and vital services has won the support of AFSCME [American Federation of State, County and Municipal Employees] District Council 57, the Faculty Association of California Community Colleges (FACCC), and Clergy and Laity United for Economic Justice (CLUE),” said Joshua Pechthalt, president of the California Federation of Teachers (CFT) and a spokesperson for the coalition said in a release early today.

Rev. Dr. Art Cribbs, executive director of CLUE California, said his organization endorsed the Millionaires Tax because “[w]e are seeking a more equitable means to raise revenue in California to meet the needs of our children in public schools, elders on fixed incomes, and disabled residents who require vital services. The Millionaires Tax offers the brightest prospect of getting voters’ approval and making our state’s economy more stable. It is not too much to ask the most prosperous citizens in California to pay a few pennies on each dollar over $1 million earnings. It is fair and long overdue.”

The move reflects a growing movement on the left toward tax reform and an emerging issue of tax fairness that has generally been the province of the right.

While ultimately groups like CTA would like to see the tax code reformed to produce a more equitable tax structure and a more stable revenue base, in the short term they recognize that the governor’s proposal represents the best chance to get immediate general fund revenue that would go to education.

“For my part, I am determined to press ahead both with substantial budget cuts and my tax initiative. The cuts are not ones I like but the situation demands them,” Governor Brown said during his State of the State address

“As for the initiative, it is fair. It is temporary. It is half of what people were paying in 2010. And it will protect our schools and guarantee – in the constitution – funding for the public safety programs we transferred to local government,” he argued.

“Given the cutbacks to education in recent years, it is imperative that California devote more tax dollars to this most basic of public services,” the governor argued.  “If we are successful in passing the temporary taxes I have proposed and the economy continues to expand, schools will be in a much stronger position.”

Share:
Previous : MLK Day in Davis Brings in More Contemporary Look
Next : Letter From Attorney Takes Us into Realm of the Absurd