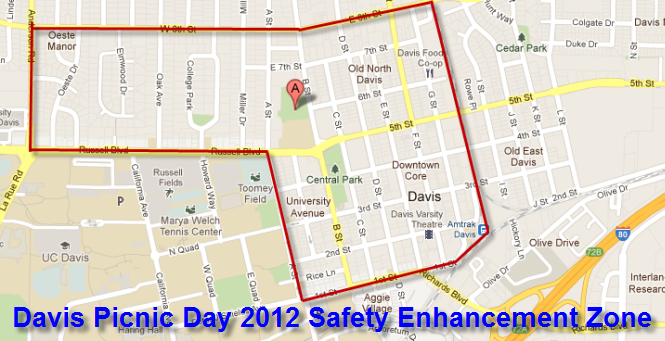 In an effort to prevent a repeat of Picnic Day 2010’s problems, the City of Davis created a Safety Enhancement Zone which basically doubled the fines and penalties for a variety of acts of public nuisance on Picnic Day 2011.  In addition, the city brought in a huge amount of out-of-town police to beef up patrols.

Despite a notable tragic event, the number of major incidents during Picnic Day last year was lower.  However, the heavy enforcement and safety enhancement concept have been a source of concern by residents in Old North Davis, who live just north of 5th Street and just above the safety enhancement zone.

They believe that having a heavy police presence and a safety enhancement zone pushed the problems northward into their neighborhood.  The neighborhood association president, Steve Tracy, on Tuesday night described what he called “a flood of resident reports about incidents last year.”

He told the council about “what appears to be drunk driving by Picnic Day ‘guests’ who park where they are unlikely to be detected by the watchful police downtown.”  He said they often accosted “residents who complain about trespassing and behavior.”

For Mr. Tracy, the neighborhood’s concern is “that the bad events of last year, with the safety zone in effect downtown, will be repeated again this year with the identical ‘solution’ in place.”

On Tuesday night the council, after hearing from residents in the neighborhood to the north, expanded the boundaries of the safety enhancement zone for Picnic Day 2012, which will be on April 21.

The new boundaries now extend from First Street up to Eighth Street.  The western portion of the zone is bounded by the university up to Eighth Street, and the zone extends as far west as Anderson Road.  The eastern edge of the boundary is the railroad tracks to the east of G St.

Police Chief Landy Black had a different interpretation of what happened in Old North Davis.  From his perspective, the department had been working with various student groups to reduce the number of huge parties of 500 or more.

They focused their efforts on having the students spread the parties around in smaller and more manageable sized parties so, instead of one 500-person party, there would be perhaps a dozen smaller parties spread around the city.

He expressed concern, as well, about spreading their limited resources over a wider area.

Chief Black told the council on Tuesday: “My recommendation, personally, is that we go with the same enhancement zone that we had last year, be sensitive to the needs of those neighborhoods and attempt to deploy as expeditiously as possible to those incidents that actually do create some disorder.”

He added: “But the entire city has to accept the fact that, during Picnic Day, we have to deploy a little bit differently because our resources are stretched very thin.”

We have a somewhat different view about that, as we noted large numbers of police, especially from out of town, standing around on corners in groups and largely getting bored.

Some of that was by design, hoping that a large show of force would deter troublemakers, and that part worked.  But as the Vanguard walked around the downtown and other parts of town, we also noted people were approached by a mob of police officers when they were doing relatively minor things and this created other problems.

It would not seem overly difficult to roll some of that show of force around the city to prevent problems from simply being displaced.

As Councilmember Stephen Souza noted on Tuesday, expanding the borders might simply re-direct the problems to other locations.

“This year we expand up into Old North Davis neighborhood, next year where do we expand after that?” he asked. “The problem just rolls to the next zone. Frankly, that’s where I think we’re headed.”

We can see some evidence of that in the report that Chief Landy Black gave on Tuesday, where he cited statistics of 104 citations in the safety zone but only 38 around the rest of the city.

Writes the staff report, “While there is a general sense that students and community members felt ‘safer’ in the downtown area in 2011 than in 2010, arrest and citation data would suggest we still have considerable work to do to fully restore order for Picnic Day 2012 and beyond.”

The report adds, “Citation data, while not necessarily a full representation of what residents observed/experienced in those neighborhoods, would tend to indicate that the majority of alcohol related problems did occur in the established SEZ, as anticipated when the SEZ ordinance and 2011 resolution were adopted in 2011.”

That to us suggests at least two problems with the data.  First, the city had the financial incentive to focus on the safety zone as they could collect double the fines and thus receive double the revenue.

Second, because of the location of law enforcement, we should expect that kind of distribution because in order to issue a citation, law enforcement must be there to witness the violation.

This point was not lost on Steve Tracy who pointed out that “the report’s conclusion that last year’s safety zone was a success [was] because of the low number of citations in areas outside downtown.”  He added that the report failed “to acknowledge that while true, the imbalance in citations is because all the police officers and citation books were downtown.”

He noted, “The barrage of reports I received this weekend included only two enforcement sightings –  a single glimpse of a cruising police vehicle, and one officer responding to take a report about a urination incident the resident’s security camera caught (hard to deny that evidence).”

In general we have two conflicting views on all of this.  The first is that this year, in a lot of ways, is more critical than last year in the future of Picnic Day.  The reason for that is that last year everyone was focused and committed to avoiding a repeat of the problems from 2010.  It was fresh in everyone’s mind and for the most part, things were tamer and more quiet.

On the other hand, we remain concerned, particularly about the conduct and treatment of people by out-of-town law enforcement.  As we went around to monitor the situation, we were ourselves harassed at multiple points in time by out-of-town police.

The police seemed to have come with the expectation that they would see action, and when they didn’t, it looked like they wanted to create action.