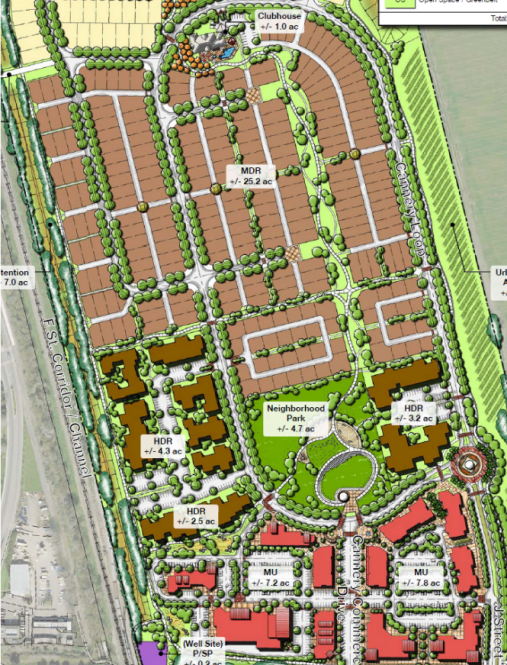 Since the Cannery Plan has been brought back by ConAgra, the Vanguard has had several fundamental criticisms of the project.  At the most basic level, the Vanguard questions the need for the project, particularly given the continuing slumping of the real estate market.  The Vanguard has also questioned the appropriateness of the location, given the city’s goals about economic development and the lack of large parcels of land suitable for business parks elsewhere in the city.

Just as importantly, the Vanguard has criticized the specific plans for the development, including the lack of specificity on sustainability features, difficulty of hooking transportation links, the inaccessibility of the buses to residents and lack of universal design principles, among other concerns.

The city seemed ready to rush out this project in some sort of expedited schedule, however, it became clear that the project, even if we deemed the first part of our criticism null and void, was simply not ready.  So, to their credit they have slowed down and gone back to the drawing board.

There have also been questions about the fiscal model – although we always believed that could be tweaked to an acceptable level.  The staff indicates: “Since the April, 2011 City Council meeting staff has begun preliminary fiscal modeling of the project proposal using the City’s fiscal model. These preliminary runs have helped inform plan refinements and indicate that fiscal neutrality is achievable.”

The report adds: “The preliminary fiscal modeling concludes that the project, with a land use mix as currently proposed, would result in a neutral to modest negative net fiscal impact. The magnitude of the impact is heavily dependent on modeling assumptions.”

Whether it is true or not remains to be seen, though we believe ultimately that the project, with the right assumptions and stipulations, can be made to be fiscally neutral for the city.

The report continues: “The project will be subject to a Development Agreement. The Development Agreement could provide a mechanism to ensure that the project is fiscally sound and could incorporate both one-time contributions of funds or facilities, or establish ongoing funding mechanisms to ensure revenues are sufficient to cover the costs of providing city services to the project.”

We agree that this is possible and believe that this council will take steps to ensure that the project is no less than fiscally neutral.

Since last summer the staff reports that they have worked on the business park and mixed-use component, worked to refine grade-separated bicycle and pedestrian connections to the site, worked on the urban farm concept, refined housing types, worked on universal design features and sustainability, and worked with utilities.

In short, staff argued: “Staff believes that the applicant has submitted a project description that begins to appropriately integrate the city goals for housing, economic development, environmental sustainability, community character and fiscal responsibility.”

Finally they add: “Proceeding with the EIR does not bind the City Council to any particular course of action now or in the future. Ultimately, the Council must review and determine if the project proposal is one that the City wishes to proceed with or not.”

There are several key points to be made in response.  A year ago, when this project came back as basically the same project that Lewis Planned Communities had previously put forward, the staff did not do much to dissuade the developers from coming forward with an expedited schedule.  It was only when the community and council balked at what was coming forward that staff seriously engaged the developers in revisions and improvements.

The staff uses the language, “begins to appropriately integrate the city goals…”  The key phrase is “begins to,” which is not exactly reassuring.

Second, there is this mistaken notion that you move processes forward and then fix the problems.  There is a perpetual argument that nothing precludes revision or stopping the project.  The problem is that once you do the Environmental Impact Report, the developer has now invested close to a million dollars into the project – this is, once again, let us move the ball forward and stop it later, and the later, as we have learned, never really comes.

It would actually be helpful to know if the community wishes to develop housing on this site before the company sinks more money into the project.  Unfortunately, that is not possible under given constraints.  Ultimately, this project likely goes to the voters even though it is not a Measure J project.

Here is the link to their full plan – the plan itself begins on page 14 through 69. We will address a few critical revisions to their plan.

One of the issues that was brought up are linkages of the pedestrian and bicycle paths to the rest of the city.  The problem with the site is that it is pretty much cut off from the rest of the city with Covell Village on the east, the railroad tracks to the west, nothing to the north, and Covell Blvd to the south.

They propose three linkages, first at J Street: “The East Covell Boulevard/J Street intersection will be reconstructed to improve turning movements and accommodate easy and safe at-grade pedestrian and bicycle movements. With the improvements, bicycle and pedestrian connections will be available from the southeast corner of the project, across East Covell Boulevard to link to existing east, west and southbound movements.”

The problem is that “at-grade” is precisely what I do not believe Mayor Krovoza wanted to see there.  They, however, are proposing an undercrossing on the southwest side which would link the project to the existing bicycling facilities.  And they are planning one at the Commerce Drive intersection, which would be at-grade.  There is still no plan for crossing to the west.

The transit plan remains problematic: “Unitrans and Yolobus will provide future transit services to The Cannery neighborhood. A new transit center, with a route map, shade structure and seating, will be constructed along the The Cannery frontage on East Covell Boulevard, immediately west of the J Street intersection. The transit center will be directly accessible from the mixed use area.”

This does not fix the problem that the neighborhood goes a half-mile deep and while the bus stop location would be accessible to the front portion of the residences, it would be a long trek for those living in the northern half of the project.

Regarding affordable housing: “Twenty percent (121 units) of the residential units within the project are designated for moderate, low and very low income households, as defined by the City of Davis. The intent is to provide a mix of housing choices and prices that will serve a variety of households and lifestyles, particularly the needs of local employees.”

And finally, on the sustainability features, they argue, “The project’s practical and responsible application of measures represents the boldest approach to sustainability of any neighborhood in the City and is setting the bar for a privately developed community.”

They continue: “The project will comply with the Davis General Plan policy and Tier 1 of the 2010 California Green Building Standards Code (adopted by the City January 1, 2011) and proposes a carbon reduction plan in furtherance of the City’s greenhouse gas emissions reductions standards, thereby reducing the project’s carbon footprint and contribution to global climate change.”

So, it will comply with, but not exceed.  I have still not seen an estimated figure for GHG reduction like we saw with both Wildhorse Ranch and also UC Davis’ West Village.

The design strategy to reduce GHG emissions includes a range of measures in three components:

They further argue: “The residential buildings in the project will exceed California’s 2008 Title 24 Energy Code by 40%, which is equivalent to 33% greater than 2010 Cal Green Tier II requirements.”

“The passive design and energy efficiency strategies associated with the project will reduce energy demand of homes, office and commercial uses. Most of the remaining residential energy use (and hence GHG emissions) would be further reduced through photovoltaic (PV) systems or solar panels,” they write.

They add: “Residential units would be built to accommodate and be wired for a rooftop PV system. Rooftops of residential units and commercial buildings could be used for PV systems through a combination of lease and/or ownership programs.”

The developers deserve credit by going forward, but do they go far enough?  We will examine that question more closely this week.  And even if they do, does Davis really need this large a development at this time?

Share:
Previous : Stakes Are High As Voters Hit The Polls
Next : The Public-Private Question on the City’s Water Service

27 thoughts on “Council Will Examine New Cannery Proposal This Week”