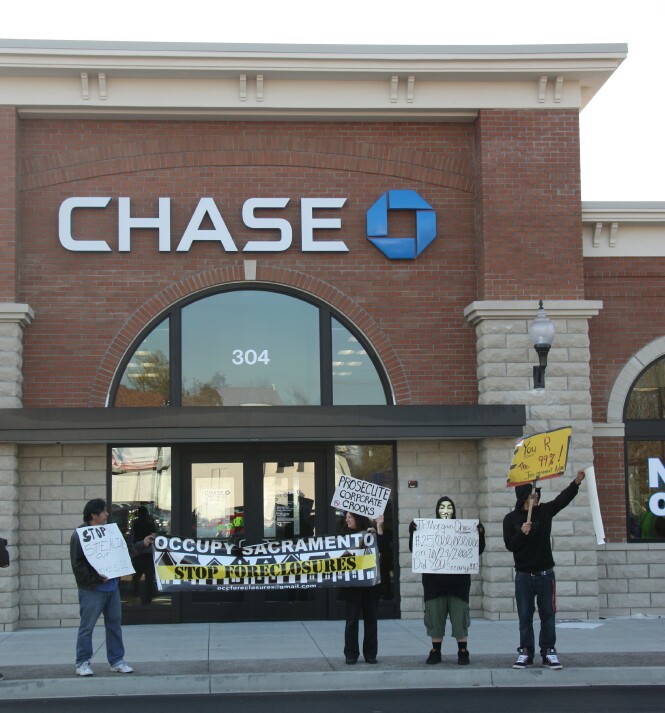 Occupy Movement Blasts the Deal and Calls For Moratorium on Foreclosure

Kamala Harris last week had a day many politicians dream of: a headline-making announcement that delivers a large amount of money to constituents.  Symbolically, the attorney general’s foreclosure settlement announcement and her role in shaping the out-of-court mortgage-abuse settlement with five huge home loan banks – Wells Fargo, Bank of America, JP Morgan Chase, Citigroup and Ally Financial – marked a huge victory for the little guy in a sea of turmoil and unsettledness.

On the other hand, there are more questions than answers at this point.  As Peter Schrag, the venerable columnist now writing for the California Progress Report noted, “California Attorney General Kamala Harris deserves at least some of the self-congratulation she heaped on herself when the big national mortgage foreclosure deal was announced last week.”

However, it is a fleeting moment.

“Despite the cheering,” he writes, “by itself this settlement, with the nation’s five big private mortgage service companies, is not likely to make much difference to the overall California economy or to most of the 2.2 million families directly hit by the mortgage crisis of the past five years.”

“It’s a drop in the bucket,” Mr. Shrag quotes Christopher Thornberg, the respected analyst who heads Beacon Economics. In terms of its impact on the state’s economy, “It’s not going to cure anything.”

On the other hand, Mr. Schrag argued, “But if it pushes Fanny Mae and Freddy Mac, the nation’s huge public-private home lenders, into agreeing to similar terms it really could make a difference. Fanny and Freddy, which hold 60 percent of all mortgages, have so far refused to budge.”

Peter Schrag notes that there are other good features of the settlements.

“In holding out for five months, Harris not only drove up the total amount of the settlement  — the initial terms, she said, would have given California $4 billion.  She also preserved California’s right to sue banks in state courts and to pursue its own on-going investigations into their malfeasance in bundling shaky mortgages into bonds later sold – and oversold – to both private and public investors,” he writes.

“Last week Harris also reiterated her intention to go after those she calls the ‘predators,’ fast-buck operators who extracted fat fees from homeowners with underwater mortgages by promising services to reduce payments or principal they never delivered,” Mr. Shrag adds.

The terms of the deal are not perfect.  Only about one quarter of those two million and change California homeowners, whose homes are worth less than they owe on their mortgages or those who have had their homes foreclosed, will get some relief.

As Mr. Schrag writes, “Much of it, $12 billion of California’s $18 billion share, will go to write-downs of the principal or for short sales – essentially the willingness of the mortgagor to accept less repayment in the sale of a home than what’s still owed on the loan.”

“Some people who’ve already lost their homes will get token sums – typically about $2000 each – in ‘restitution’ for irregularities in the foreclosure process, typically the use of the mechanized lenders’ robo-signatures on legal documents,” he adds.

$1.1 billion of the settlement will go to the hardest-hit communities for anti-blight and other neighborhood restoration efforts and another $850 million will go to some 28,000 struggling homeowners to help them refinance their homes.

All told, California’s share comes to less than $90,000 per family.

As Mr. Schrag notes, “When the total U.S. mortgage deficit runs to more than $700 billion, $26 billion, or even $45 billion, [this] doesn’t cover much. And that’s of course assuming a lot doesn’t get stuck in bureaucracy, or worse.”

Sharon Kyle, reporting in the LA Progressive from last weekend’s state Democratic convention, reported that the audience gave an enthusiastic welcome to the attorney general, while at the same time, Attorney General Harris “acknowledged the bank settlement only addresses a small portion of the problem.”

“Mortgage giants Fannie Mae and Freddie Mac,” Ms. Harris told the crowd, “are headed by a man who clearly does not understand his role.”

“The Obama administration is a clear winner in getting holdouts Kamala Harris and New York’s Attorney General Eric Schneiderman to sign onto the deal; the benefit to average homeowners is much less clear,” Ms. Kyle writes.  “Although the $18 billion California won in the settlement seems like real money, a qualifying former homeowner whose home has been foreclosed on – and whose mortgage was not owned by Fannie Mae or Freddie Mac – will receive less than $2,000 – small comfort indeed compared to the financial and emotional whack of losing a home.”

However, Harris did retain California’s right to “sue banks that packaged bad mortgages into securities and sold them as safe investments.”

“A major victory that was hard fought,” Ms. Kyle commented.

There were fears that the Occupiers would attempt to disrupt events at the convention center in LA, and there was a heavy police presence. However, little materialized, although the LA Times did report that two Occupy LA protesters were arrested last week outside the building where Attorney General Harris held her press conference announcing the settlement.

Indeed, the Occupy crowd calls the deal “unacceptable” and is calling for a moratorium on future foreclosures.

In a statement on Tuesday, Occupy Sacramento said, “The billion-dollar bank foreclosure settlement agreed to by CA Attorney General Kamala Harris was unacceptable to the 99% and [the 99%] demanded accountability and justice for the (bank) criminals involved.”

“The modern-day robber barons are at it again.  The 99% is disgusted and finds the foreclosure abuse settlement unacceptable. We demand accountability and justice for the criminals involved, not a robo-settlement. The banks will step up the property seizures. It is estimated there will be 1 million foreclosures in 2012,” said the Occupy Sacramento foreclosure team in a statement.

“And what about prosecution of the corporate criminals? There have been very few so far, and this settlement will make it less likely there will be any in the future. By settling, our officials have given up the right to sue mortgage servicers for foreclosure abuses and robo-signing. Without any measure of accountability, these predatory lenders will continue on their path of financial ruin of the American people,” the statement continued.

“We need an agreement that provides real relief for homeowners. Reduce every house’s principal to current market value.  Give evicted homeowners enough compensation to afford a decent, safe place to live.  Make the banks pay a larger share of settlement costs. Negotiate affordable monthly payments.  Give government the resources and power to force banks to negotiate in good faith.”

“And we need a foreclosure moratorium, so that no more homeowners are wrongfully turned out of their home because of a banking system that is still a long, long way from being fixed,” said Occupy Sacramento.

The Occupy people argue that, while banks “cheated millions of homeowners with predatory lending,” now four years after the government “failed to engage in any meaningful enforcement, the banks are being let off too lightly. In essence, they are getting a second round of bailouts under the guise of ‘helping’ distressed homeowners”

They argue: “The five large banks – Bank of America, Citigroup, Wells Fargo, JP Morgan Chase and Ally Financial – will pay $25 billion in compensation. But only $5 billion will actually come from the banks’ pockets. The remaining $20 billion will come from the mortgage-backed securities investors, such as pension funds, 401(k) plans and insurance companies, themselves victims of the banks.”

“Occupy Sacramento believes that this settlement will provide very little relief for the millions of homeowners who have suffered, and continue to suffer, from the foreclosure crisis. A paltry $2,000 does not begin to rebuild the shattered lives of those who have been evicted from their homes,” they argue.

3 thoughts on “Harris’ Settlement Brings Big Response But Many Questions”