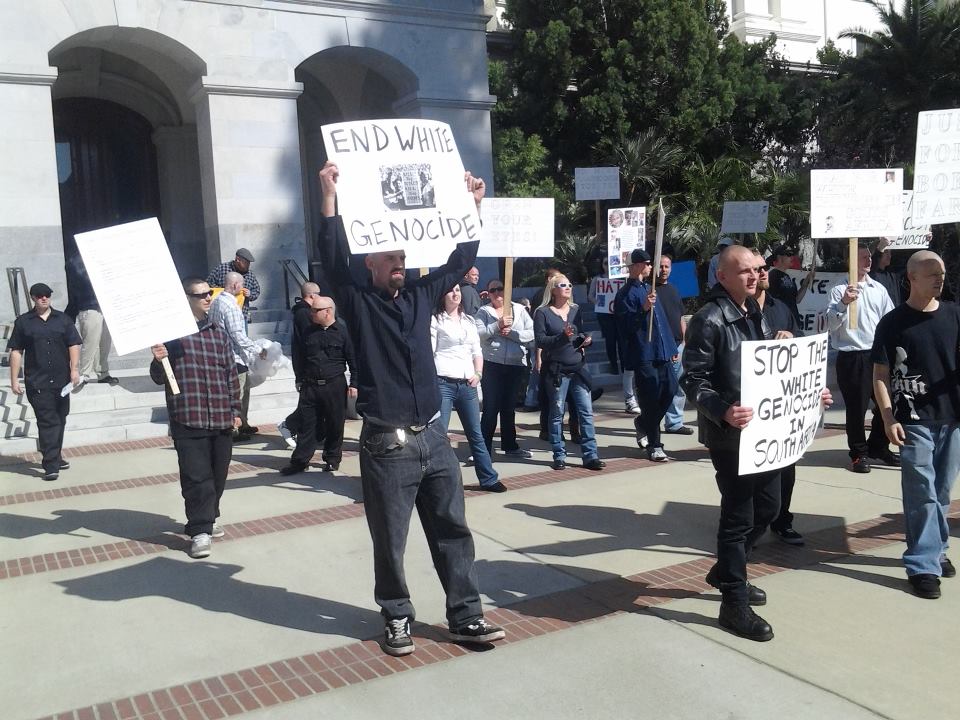 According to a variety of news accounts, a clash ensued yesterday between members of the Occupy Oakland movement, who journeyed to the state Capitol to counter a rally by a group called the South African Project, and that group, which claims to be in existence to stop the murder, torture and genocide of the white South Africans.

According to the Associated Press, the clash erupted on Monday afternoon, as the California Highway Patrol and Sacramento police were escorting 35 members of the South African group, who had a permit to demonstrate, following their rally outside the Capitol.

Two officers were injured, with a report that the injuries included one of them, ironically enough, being pepper sprayed.

According to the AP: “The clash followed a tense afternoon during which peace officers kept the two groups separated outside the Capitol.”

Three members of the Occupy movement were arrested on suspicion of “disobeying an officer.”

According to their website, the South African Project members have been organizing across the nation: “The South Africa Project is launching a campaign to draw concerned men and women to appeal to the masses of White citizens of the international community, to convince them to ban together, to form a human tidlewave [sic], a tsunami of flesh, a flood  of outrage that will command attention and action from our lawmakers, our congressmen, our senators, our governors, our politicans and media moguls of every strain, to convince, if not convict them, of the growing threat to the White South African.”

“They must learn that we mean business and that we will not be dissuaded from this issue, or our task,” they continue.

Meanwhile, Occupy protesters, many wearing hoods and masks, told the press that they had come from the San Francisco Bay “to counter what they called a racist group affiliated with former Louisiana Ku Klux Klan leader David Duke.”

Morris Gulett, a spokesperson for the South Africa Project, told the AP that the clash in Sacramento was unfortunate.

“It’s not surprising that the counter-protesters got in the way of the peaceful march we wanted it to be,” Mr. Gulett said. “Our intention was to conduct a peaceful march.”

Meanwhile, Occupy protesters like Ryan Stark, who claimed to be part of Occupy Sacramento, told the media that “he joined the protesters challenging the South Africa Project protesters because there needed to be a showdown.”

“I didn’t throw anything … but these sorts of demonstrations need to happen,” he said, referring to the counter protest. “They do have the right to say what they want, but we’re not going to let it fly.”

However, yesterday evening, spokespersons for Occupy Sacramento disavowed their involvement in the clash, saying “it neither sponsored nor was involved in a protest that injured police officers at a neo-Nazi protest at the State Capitol.”

“We do not fight police, even if they are the perpetrators of violence, as they have been at Occupy demonstrations. We have had 110 arrests since October 6 at Cesar Chavez Park,” they continued.  “There has not been any violence on the part of our supporters in any of those arrests or protests.”

It remains a bit of a mystery why Occupy Oakland came all the way over from the East Bay to Sacramento.  There is no mention on their website or their twitter account.

Because of their response, a group that was getting absolutely no media attention suddenly finds itself on the evening news and the morning newspapers across the country as the centerpiece in this battle.

Making it worse, from most accounts, it was the Occupy protesters that were the aggressors.  The South African Project had protest permits and were not attacking either the police or counter protesters.

While the Vanguard may disagree with the message that the South African Project is trying to send, they have the First Amendment right in this country to express their views, no matter how misguided those views may be.

The Vanguard appreciates the efforts by the Occupy Sacramento organizers to disavow themselves from these actions and hopes that Occupy Oakland will follow suit.

28 thoughts on “Occupiers Clash With White Supremacists At Capitol”