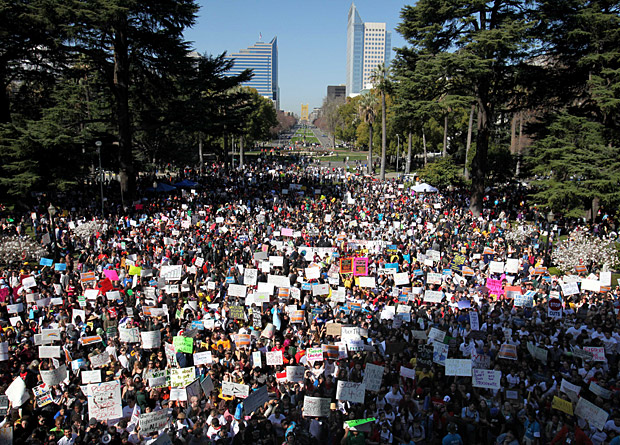 In a meeting this week with the San Francisco Chronicle’s Editorial Board, Governor Brown threw down the gauntlet, arguing that his tax initiative was the only one that would solve the state’s fiscal crisis and increase funding to schools and higher education.

The Chronicle reported, “He said that one of the other tax proposals, known as the millionaires tax, might poll well because it would hit the wealthiest Californians and dedicate money almost exclusively to education, but that it fails to consider the effect of Proposition 98 – the state’s education funding guarantee – and amounts to ‘ballot-box budgeting’ that creates more problems than it solves.”

“You can’t look at an initiative in and of itself – it is a piece of the state budget,” he said of the proposal.

Those backing the millionaire’s tax responded on Twitter that the governor’s tax proposal would slash services by another $2 billion even if the measure passed, and if it failed, funding to public schools would be slashed by another $5 billion.

The energy in this state is coming from young people, who gathered in large numbers at the Capitol early this week to support the millionaire’s tax.

One of those was Charlie Eaton, speaking on behalf of a group called ReFund California, which is “a statewide coalition of homeowners, community members, faith leaders and students working to make Wall Street banks pay for destroying jobs and neighborhoods with their greedy, irresponsible and predatory business practices.”

“It’s no secret for about the last ten years in California,” he added, “it’s students and workers who have paid.”  He cited 300% tuition hikes and massive cuts that have cost jobs for workers.

While the workers and students have suffered, Mr. Eaton argued, “At the same time, corporations have not been paying – the one percent has not been paying for education.  They’ve had tax cuts.”

Others like Van Jones stood up for the younger generation, and said that his generation was throwing them under the proverbial bus.

“We are pulling the ladder up behind us and we have got to start putting the ladder back down for these young people,” he said.  “We have young who are graduating every spring off a cliff into no jobs in the worst economy since the Great Depression with unbelievable amounts of student debt.  It’s not fair to them.”

“I am so proud that these young people have begun to try to change the conversation and bring us back to what made California great,” Mr. Jones added.  “California is great because we invested heavily in education and infrastructure.  All the things that have made this state such an easy place to do well [in] and to get wealthy.”

“It is time for wealthy people in California who have been drinking from the well to start replenishing that well.  You can’t just take take, take from California and not give back,” he said.  He argued that the millionaire’s tax would put six billion dollars back into education.

But not everyone agrees.

Dean Vogel, a Davis resident, heads up the California Teachers Association, and this week he issued a statement that pointed out critical and fatal flaws in the millionaire’s tax that he believes will make things worse for public education.

“Despite a catchy title that certainly has some appeal, the Millionaire’s Tax initiative has some unintended consequences that will only make matters worse for funding public education and essential public services in California,” Mr. Vogel said.

Last month the CTA broke with the California Federation of Teachers, to support the governor’s proposal.

He added, “The governor’s initiative is the only proposal that will help close the current budget deficit, restore funding to education, and pay for services shifted to local cities and counties. Without the governor’s fair-share tax on the wealthy, the state is facing a $12 billion to $13 billion shortfall over the next 18 months, and more cuts to schools and colleges.”

One of the biggest concerns is that, with two and possibly three competing tax measures, the voters will become confused.

Mr. Vogel noted this potential problem, stating, “CTA is equally concerned that all the research shows that having three funding initiatives confuses voters and weakens support for raising the revenues our students, schools and communities desperately need.”

He argued, “It’s time for everyone to come together and support the only initiative that is designed to put our state back on the road to recovery. Governor Brown’s initiative will do just that. His proposal to tax the wealthy has the support of CTA and other labor, community and business groups, which is the type of widespread support it is going to take to pass any funding initiative.”

The bottom line for Mr. Vogel and others is, “Unless we all get behind this initiative, everyone loses.”

The California Budget project has compared the three major measures that have been filed and examines what they tax and the extent to which they help narrow the state’s budget gap.  We will compare the governor’s proposal to the millionaire’s tax.

According their report, “The Governor’s Proposed 2012-13 Budget identifies a $9.2 billion budget gap and offers $10.3 billion in ‘solutions’ to close the gap and provide a modest reserve. Both the Legislative Analyst’s Office (LAO) November five-year forecast and the Department of Finance’s (DOF) ‘baseline’ forecast that underpins the Governor’s Proposed 2012-13 Budget project continued shortfalls over the next five years absent additional spending reductions, revenue increases, or a combination of both.”

“A key consideration in evaluating potential ballot measures must be the extent to which they do, or do not, help bring the budget into balance and limit additional spending cuts,” they note.

According to their analysis, “The Governor’s Budget summary assumes that $2.5 billion of the 2012- 13 revenues would go towards the higher school funding obligation and $4.4 billion would be available to help close the budget gap.”

“The LAO estimates that the revenues raised by the high-income tax rates would be significantly less than the amount assumed by the Governor. Specifically, the LAO estimates that the Governor’s measure would raise $4.8 billion towards the 2012-13 Budget. The LAO does not estimate how much of the additional revenues would increase the Proposition 98 guarantee, but does note that, ‘the effect of the temporary tax increases would more than offset’ the state savings generated by the exclusion of the realignment sales tax revenues.”

They add, “More than half of the revenues raised by the Governor’s proposal would come from the top 1 percent of state income taxpayers, while all Californians, including businesses, would pay the higher sales tax rate.”

In addition, these funds would be over and above Proposition 98.

According to the CBP: “It appears that the state would still be obligated to increase school funding as required by language included in the budget agreement. The CFT measure would not directly help close the budget gap, leaving the state facing a $9.2 billion shortfall over the next 18 months and continued gaps thereafter. To close the gap, the Legislature could potentially reduce funding to the UC and CSU or suspend the Proposition 98 guarantee to achieve savings.”

They add: “Significantly, the Legislature could not direct the expenditure of funds for children’s and senior services, including funds that go to support services wholly or primarily funded by the state or where state laws establish the framework for programs and services, such as SSI/SSP; CalWORKs grant levels and time limits; Medi-Cal benefits and co-payments; and Healthy Families.”

The CBP concludes: “Finally, due to provisions of the State’s Constitution that require the state to reimburse local governments for a ‘new program or higher level of service,’ the Legislature could not require counties to use the additional revenues to backfill particular programs or services. Moreover, the CFT measure states ‘funds…shall not be subject to appropriation, reversion, or transfer by the Legislature, the Governor, the Director of Finance, or any other state official or agency.’ “