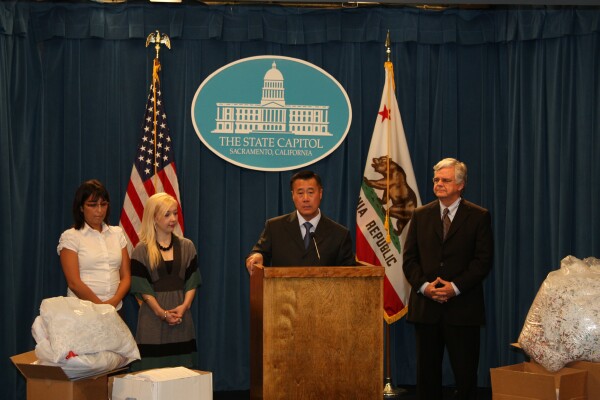 Long before the term “1%” was enshrined in the popular lexicon of the citizenry, California State Senator Leland Yee was fighting corruption, fighting for open government, and fighting against executive pay raises in institutions of higher education in California.

Given the lightning rod that has developed for student protests, one would think that more care would be taken.  But the lesson that we learned this week is that neither prudence nor decency seem to have a place when it comes to the decisions made by the CSU Trustees, who follow the actions of UC from late last fall.

Moreover, any notion of synergy between Democrats and the student protesters and/or Occupy movement is rendered largely inoperative by the starting inability of Democrats, in the higher education committee, to act.

On Tuesday, the CSU trustees, who met in Long Beach, headquarters to the California State University system, approved raises for the presidents of CSU East Bay and Cal State Fullerton.  They did so over the public criticism of Governor Jerry Brown.  They do so despite complaints from student and faculty members alike.

The ten percent salary increases were the maximum allowable.  This was done back in January after they sparked outrage by giving a $100,000 raise to San Diego State’s new president and raising tuition by 12% at the same meeting.

Writes Joseph Palermo in the Huffington Post: “So out of touch are Reed and the Trustees they saw nothing amiss last summer in passing a 12 percent hike in student fees at the same meeting where they voted to give the incoming president of San Diego State an increase in salary of $100,000 over his predecessor.”

He adds, “Only after the public uproar this move caused, which caught the top managers by surprise, did they hastily draw up a new policy that would cap raises for new presidents at 10 percent over the previous salary. But the damage had been done.”

In a letter from Governor Brown, he wrote, “I write to express my concern about the ever-escalating pay packages awarded to your top administrators. I fear your approach to compensation is setting a pattern for public service that we cannot afford.”

He added, “I have reviewed the Mercer compensation study and have reflected on its market premises, which provide the justification for your proposed salary boost of more than $100,000. The assumption is that you cannot find a qualified man or woman to lead the university unless paid twice that of the Chief Justice of the United States. I reject this notion.”

“At a time when the state is closing its courts, laying off public school teachers and shutting senior centers, it is not right to be raising the salaries of leaders who–of necessity–must demand sacrifice from everyone else. These are difficult times and difficult choices must be made. I ask that you rethink the criteria for setting administrators’ salaries.”

Senator Yee was angry, issuing a statement, “When the students are suffering, CSU should not be handing out such exorbitant executive compensation.”

The Senator noted that the CSU Board of Trustees has twice in the past year raised tuition by 9.6 percent and then by 12 percent.

This week, the California Faculty Association which represents faculty in the CSU, issued a scathing critique in a report entitled “For-Profit Higher Education & CSU: A Cautionary Tale”:

“During this challenging time, the system’s chancellor, Charles Reed, has chosen to lead the CSU through a stealth process of what might be described as ‘for-profitization,’ taking the CSU down a path that threatens the public essence of the university and its mission. Leveraging the public’s hunger for access and the opportunistic moment of crisis, the CSU’s executive leadership is quietly pursuing a vision of the university that will have permanent consequences and irrevocably harm the CSU’s quality and reputation. This version of the CSU contrasts starkly with that of the visionaries who founded the system fifty years ago.”

The report examines how, “with virtually no public input, those entrusted with leading the CSU have parlayed the public’s desire for greater access to higher education in a time of economic crisis into a stealth program that threatens to alter the very essence of the CSU as a great public university.”

“Last year, CSU executives were paid between $240,000 and $400,000 in salary alone. On top of that, each executive is allotted $12,000 per year as an auto allowance. Campus Presidents and the Chancellor each receive either state-owned homes or housing allowances of $50,000 or $60,000 per year. Other perks available to executives include special retirement packages such as lifetime employment as a tenured professor and other deals that were widely criticized as excessive ‘golden parachutes’ when they were exposed by the San Francisco Chronicle in 2006.”

In a blistering letter from Senator Ted Lieu to Chancellor Charles Reed, “Against the backdrop of statewide outrage, it is disturbing that CSU leadership – rather than reaching out to stakeholders – instead engaged in a unilateral process of creating a skewed policy to lock in ever-escalating pay packages. By asking for adoption of this policy, CSU leadership is essentially telling the Governor, Lieutenant Governor, legislators, faculty, students, taxpayers, and editorial boards in California to go pound sand.”

He adds, “The resulting loss of credibility by CSU leadership has severely negative consequences for the CSU system. Last year, CSU’s budget was cut twice, for an amount totaling $750 million. Several legislators have introduced, or will introduce, legislation to take away salary discretion from the Board of Trustees. In walking the halls of the Capitol, meeting with stakeholders, and discussing the state budget with other legislators, I can safely say CSU has few to no defenders.”

In their hasty and ill-conceived defense, the university official on Wednesday conceded that the raises were “bad optics…bad juju” in light of budget cuts and enrollment restrictions, a notion that was first quoted in the Sacramento Bee but quickly spread across Twitter and other social networking sites to the mocking of many.

In a scathing editorial from the Fresno Bee, of all places, they wrote, “In this economy, the symbolism of the CSU move is dreadful.”

Despite all of this, and all of the righteous indignation put forth by Senator Yee (who can hardly be accused of merely going with the political winds, given his track record), Governor Brown and Senator Lieu, the Senate Higher Education Committee, the same committee that smacked down Chancellor Katehi a few months ago, would not pass Senator Yee’s legislation to limit executive pay raises.

The measure only garnered four votes, three votes shy of a majority, and three Democrats would oppose. These three were Senator Alquist, Senator Carol Liu (not to be confused with Senator Ted Lieu) and Senator Simitian.  Senator Lowenthal, another Democrat, abstained and Senator Vargas was absent.

However, they rejected a bill by Senator Yee that would have prohibited pay hikes for top administrators during bad budget years or within two years of a student fee increase.

“It is another sad day for our students,” said Senator Yee. “Unfortunately, the Education Committee has sent the completely wrong message. Rather than stand up for students and faculty, they protected the 1% and condoned CSU’s bad behavior. CSU students and California taxpayers deserve better than the status quo.”

“Unfortunately, SB 952 codifies this abhorrent practice of catering to university elites,” said Senator Yee. “Rather than approving SB 967 and putting a stop to these exorbitant pay hikes, the Committee instead has ensured in perpetuity that students suffer and executives get rich.”

“Unfortunately, it is only a matter of time before CSU gives yet another executive pay hike and another scandal plagues our great university,” said Senator Yee. “I will not give up this fight for our students, faculty and California taxpayers.”

And we wonder why students, who see their livelihood and futures threatened by tuition hikes, might be outraged not only at the university leadership, but also by their elected representatives in Sacramento.

28 thoughts on “Commentary: Actions by Trustees, Inactions by Sacramento Fuel Outrage of Students”