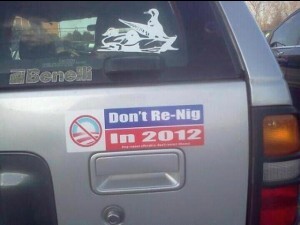 Those who believe that the election of Barack Obama in 2008 marked the end of racism in this nation are, simply put, wrong.  It may symbolize that the majority of the people in this country are willing to, under the right circumstances, vote for an African-American.

In fact, that number is probably larger than Mr. Obama’s vote share in 2008, simply because there is a subset of people who would not vote for Mr. Obama but might have voted for a black Republican.

But the idea that racism is a thing of the past, I think, ignores too much contemporary reality.  And even if a bare majority were willing to vote for a black man, that does not preclude a sizable minority harboring racial animus or prejudice.

Look no further than the long “birther movement,” in which Mr. Obama for a variety of reasons was said not to be a natural-born US citizen.  Or the assertion that he is Muslim, not Christian.

If you want to argue that there are interlocking factors of race, immigration status and anti-Islamic prejudice permeating these discussion – I don’t disagree.  In the end, it does not really matter if it is race, religion, ethnicity, or socio-economic status that is the root of the hatred.  The problem is one of prejudice.

If anything, these interlocking beliefs have become more and not less complicated since the fall of Jim Crow.  No longer do people oppose equality in the form of equal opportunity, segregation or overt discrimination.

As early as 1973, political science and psychological scholars noted the fundamental shift in attitudes toward race.  They developed the term “symbolic racism” to determine and explain why it was that many white Americans supported principles of equality but were less than willing to support various programs to implement these principles.

No longer did people fight over segregation, instead it became a fight over busing or affirmative action.

Adherents of the symbolic racism school believed that racial prejudice and discrimination no longer existed. Instead, the racial divide was over economic outcomes and the extent to which blacks were willing to work hard and were seeking special favors to get ahead without putting in proper work.  This has led to a widespread belief that blacks feel entitled to preferential treatment.

I have always been uncomfortable with this thesis, primarily because it conflated so heavily with political conservativism.  After all, can we explain these beliefs strictly in terms of racial animus when we have people who simply believe that it is not the government’s job to regulate various activities and ensure equality of outcome?

The problem for analysts and scholars, then, has always been to what extent opposition to busing or affirmative action is due to racial animus and to what extent it is due to political conservatism.

Scholars attempted increasingly sophisticated batteries of questions to determine the answer, but never did they get to a satisfactory point.

What has been surprising under Barack Obama’s administration, however, is how brazen racial animosity for the president has become.  It is difficult to deny that things like the birther movement and images of the president as an ape or monkey, among other things, are in fact at least partially racially motivated.

The recent incident involves Paula Smith, a Georgia resident who owns the company Stickatude.com.  They’ve been selling a version of an anti-Obama sticker that reads, “Don’t Re-Nig 2012.”

Roger Friedman of Forbes magazine indicated that this has become a very hot selling item.

Ms. Smith insisted in a phone interview that the bumper sticker is not racist.

Mr. Friedman “asked her about the ‘N’ word, for which ‘nig’ is the shortened version.”

She said, “According to the dictionary [the N word] does not mean black. It means a low down, lazy, sorry, low down person. That’s what the N word means.”

Mr. Friedman begs to differ and notes that in the Webester’s Dictionary, the word is defined as “member of any dark skinned race. Taken to be offensive.”

Dictionary.com says the word “is now probably the most offensive word in English. Its degree of offensiveness has increased markedly in recent years, although it has been used in a derogatory manner since at least the Revolutionary War.”

According to her interview, “Ms. Smith said she is not racist, she just wants Obama out of office. She tells me she doesn’t have a preferred replacement candidate.”

Mr. Friedman adds that she says, ” ‘And besides, Obama is not even black. He’s got a mixture of race. It’s his choice of what his nationality is. I’m a mixed breed. I call myself a Heinz 57,’ she says, referring to an ancestry that’s part of French, Scottish, and German.”

“I just want someone that’s going to help the United States and not give it [away to] other countries all the time. And stop giving the immigrants the benefits that most Americans inside their own states can’t even get because they’re giving it [to] others who don’t even live here as an American,” she continued.

The most interesting thing is she said  that the N-word is not a bad word.

“No,” she said, ” because I don’t use it. I have kids here around me that are black kids. I call them my own kids. I’ve helped black families…to guide them in the right direction. Paintball is one of these things. We like to laugh and have a good time. That’s our way of life.”

So it’s not a bad word, but she doesn’t use it.  Who is she kidding?

It was inevitable that something like this would emerge.  The fact that it is universally condemned shows that things are not as they once were.  But there is still that element floating just below the surface, and that ought to give everyone just a little bit of pause.

Share:
Previous : Dunning Falsely Charges School District With Election Violations; Fails to Do Own Due Diligence
Next : Release of Pepper Spray Support Delayed At Least Until April 21