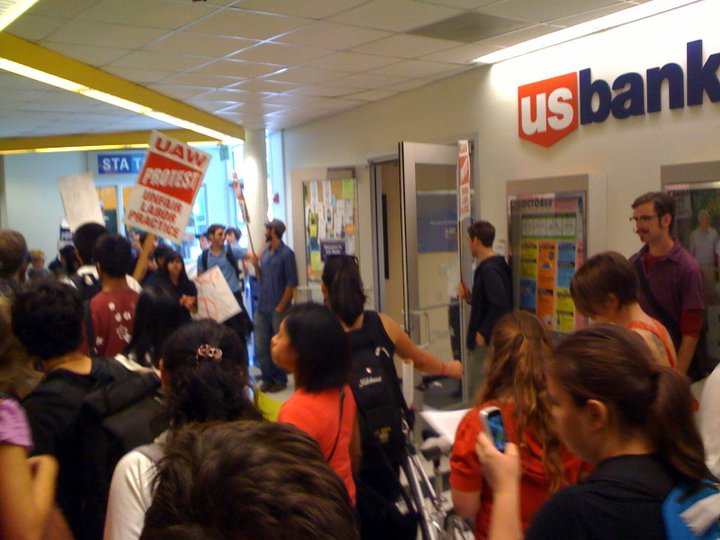 The university has come under fire this week for their handling of the protests blocking U.S. Bank, that ultimately led to the bank attempting to get out of their ten-year contract and vacating the spot.

At a town hall meeting, Vice Chancellor John Meyer addressed campus staff and described the campus’s patient, measured responses to the brief occupation of the former Cross Cultural Center and the almost daily blockade of the U.S. Bank branch in the Memorial Union.

“We think we’ve engaged an approach this quarter that is measurably positive,” Vice Chancellor Meyer said.

According to the university, “The campus’s new Engagement Team – several campus employees from different departments who have negotiating and mediating skills – has had regular contact with the protesters, talking with them, listening to their points about ‘real issues’ such as budget cuts and rising tuition; and trying to develop relationships.”

In addition, in the case of the bank protest, the campus says it handed out notices to protesters explaining their rights and responsibilities – advising that blocking people from entering or exiting the bank “is an illegal act,” Vice Chancellor Meyer said.

Eventually, the campus has forwarded six cases to the Yolo County District Attorney’s office, for possible prosecution as misdemeanors.

However, all university spin aside, the efforts by the university were not enough for the bank to stay.

The university remains hopeful that they can mediate it in further talks with the bank.

In the March 1 letter to the Regents, US Bank Senior Vice President Daniel Hoke wrote, “U.S. Bank advised the Regents of their default resulting from the faculty and student protest at the Branch.”

Most provocatively, he called the employees virtual prisoners, writing, “The employees of U.S. Bank who, at times, arrived prior to the protesters, were effectively imprisoned in the Branch.”

Protesters vehemently deny the claim, arguing that the employees were allowed access both in and out of the building.

Mr. Hoke continued, “For well over a month now, U.S. Bank has been deprived of the use of the Branch because of the human barricade formed by the students and faculty in front of the door to the Branch. Notwithstanding the repeated demands of U.S. Bank, the Regents have not provided access to the Branch.”

“The Regents have refused to remove or arrest the persons participating in the illegal gathering even though the Regents have used available laws to disperse protestors who have congregated elsewhere on the University’s campuses,” he continued adding, “Instead of trying to disperse the illegal gathering, the Regents allowed the blockade to continue. It has become clear that the Regents will not disperse the protestors and are content to allow the blockade of the Branch to continue. U.S. Bank, however, cannot permit the risk of physical injury to continue, and it cannot continue to suffer economic loss.”

Mr. Hoke writes, “In light of the above, there is no doubt that U.S. Bank has been constructively evicted from the Branch due to the repeated and unabated breach of the covenant of quiet possession. The Regents have been given notice of their default and have failed to cure it.”

The university, however, fired back in a letter from Greg Haworth, who noted that there are eight years remaining on the lease and, “The Bank’s position and its conduct over the past several weeks are contrary to both the letter and spirit of the Financial Services Partnership Agreement and the Lease.”

As we noted in our commentary last week, the University responded to November 18 protests with an over-the-top response to a largely non-disruptive activity of occupying the Quad.  By using pepper spray, which violated the sensibilities of most people in this community, the university has hamstrung its further efforts to deal with protests.

The university ought to be able to effect an arrest of peaceful protesters without an escalated use of force.  If they cannot do so, perhaps it really is time to disband the UC Davis police force and allow the City of Davis’ police force to expand their jurisdiction.

Some have reacted to the bank protest, taking the side of US Bank and calling them “victims” in this battle.

We believe that the bank overreacted to the situation in the Memorial Union.  We note that two recent Occupy events have shown that this is a relatively small group of activists that are largely disorganized.

Last Friday, the blockade of Monsanto on Russell Blvd in Davis was successful because Monsanto decided to opt for non-confrontation – a good idea.  The weather was non-cooperative, with heavy rains, and the protest turnout was light, shrinking as the day went on.

In better weather, a tweet went out on Tuesday calling for the Occupy Movement to march from Central Park to City Hall.  That march never materialized and a small handful of Occupiers would eventually come to the public comment at the City Council meeting to complain about being ejected from Central Park on the previous Friday night.

We certainly fault the underreaction by UC Davis in the handling of the bank protests.  It is worth noting that they continue to defend that failed policy plan.

“We engaged in a day-after-day-after-day effort to try to engage with the individuals,” university spokesperson Barry Schiller said. “Our goal was not to send out police and create daily flashpoints that would not solve anything.”

However, at the end of the day, we believe that the US Bank used this as a point of convenience to leave.  The contract with the university probably did not work out like they wanted it.

The logo on the card drew the ire of many students who were concerned with the commercialization of the campus.  Less than ten percent of students utilized the service, far less than they had hoped for.

So when the protesters came and the university was less than decisive with their reaction, US Bank, rather than holding firm and believing that this would be temporary, simply packed their bags and left.

As UC wrote in their response letter: “The Bank has not conducted itself in the spirit of the Financial Services Partnership Agreement. The Regents asked repeatedly for the Bank’s assistance and collaboration in addressing the problems created by the protesters, and the Bank has either outright refused to provide such assistance or has delayed responding in a manner that has caused reasonable suspicion that the Bank was not genuinely interested in maintaining a long-term presence at the Davis campus.”

We believe that the university is exactly right here, and the bank was not genuinely interested, for a number of reasons, in maintaining a long-term presence.

Teri Charest, spokesperson for U.S. Bank, said earlier this week that the bank closed the branch on the UC Davis campus because the protesters made it impossible to do business.

“Our concern was our inability to conduct business and the safety of our branch employees, and the ability of customers to come and go from the branch,” Ms. Charest said.

She would add, “U.S. Bank is still committed to providing the service to the community and the area” and that it was too soon to speculate as to whether the bank might reopen on the campus.

Mr. Schiller added, “We have offered to the bank to mediate this dispute.  I don’t know whether the bank will be amenable to that.”

Share:
Previous : The 9th Circuit Court Strikes Down Prop 8
Next : Commentary: Lost in the Water Debate