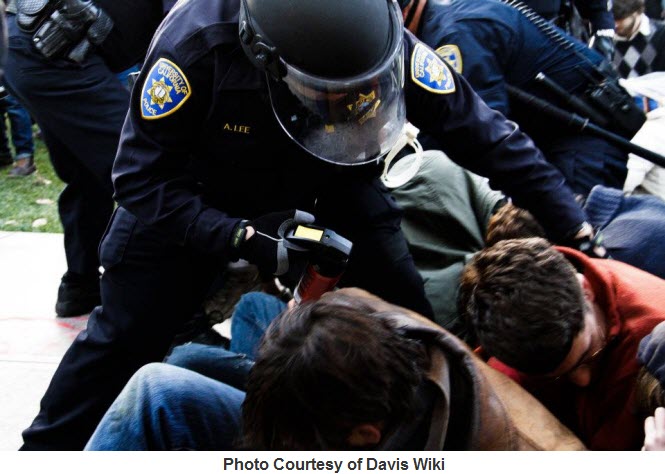 There has been much effort spent, both in attempting to identify and attempting to prevent disclosure of the identity of the second officer who was an active participant in the pepper spraying of protesters on the UC Davis Quad, November 18, 2011.

The image of Lt. John Pike has become an “internet meme” emblazoned across the nation, and indeed around the world, as a symbol of this event.  However, efforts to keep the second officer’s identity secret have been strong, in part because of fear of harassment, threat and retaliation.

The officers’ union argued in court on March 16 that, while normally the names of officers would not be considered confidential, the union wanted them withheld because of threats that Lt. Pike has apparently received.

It turns out the identity of the second officer should have been known for quite some time.  A photo on the popular Davis Wiki website was posted on November 29.

Even with that information it was not easy to identify the officer or learn details.  A phone call by the Vanguard to the department last week confirmed the existence of Alexander Lee, and the efforts by the department to avoid disclosure of the fact that Officer Lee is, in fact, suspended.

The Vanguard also notes a duty roster that shows both Officer Lee and Officer Pike working on the day in question. 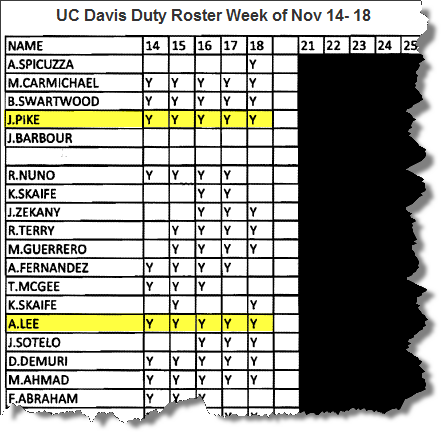 It is clearly believed that the public, despite the ruminations, should be entitled to this information.

Originally the judge wrote, “At present the Petitioners can have little or no expectation of privacy regarding the Incident given that the Incident has been the subject of public scrutiny and videos of the demonstration and the UCDPD’s use of pepper spray have ‘gone viral’ on the internet.”

He added, “As police officers paid by the public and authorized by the public to exercise authority over individual members of the public, the Petitioners could not reasonably expect that reports of their actions in the news media, the internet, and other public sources of information would be shielded from public scrutiny by a statute whose purpose is to protect the confidentiality of personnel records and information.”

However, it appeared that the university at the last hearing was willing to consider keeping the second officer’s name out of the public light.

The university had originally backed full disclosure, however, backed off that as university attorney Nancy Sheehan told the judge that the university would be willing to withhold the identity of the second officer involved in the actual pepper spraying in order that he avoid the threats that Lt. Pike had received.

Last week the Vanguard made a public records request to UC Davis requesting a copy of all previous requests and the university’s response to them.

Of particular note was a December 12, 2011, request from the Davis Enterprise‘s Cory Golden, which requested “the roster of officers on active assignment – available for duty – for the week of Nov. 14-18, as well as the same roster for Nov. 21-25.”

The university would release the active roster for the week of November 14-18, but not for the following week.

Mr. Drown would argue “that the disclosure of the officer’s name, given other publicly available information, would indicate that the officer is the subject of a University internal affairs investigation concerning the November 18 incident.”  He adds, “It was my view that this information is a confidential personnel record under Penal Code section 832.7 and 832.8, which cannot be disclosed to the public unless a ‘Pitchess Motion’ has been granted by a reviewing court.”

An ACLU staff attorney, in an interview with the Vanguard, strongly disagreed with that decision, however.

Michael Risher indicated that he has formally requested all of the names of the involved officers from UC, and has not received those names.

Mr. Risher indicated that the ACLU was involved in a case where the court decision came down about a month ago, reaffirming “a position that I certainly think has been the law since 1997 in the state, that the government cannot withhold the names of officers involved in a shooting or a criminal incident like this one, as a general matter.”

“They can withhold those names if they think there are specific reasons to believe that the release of those names would endanger the officers’ safety,” he said.  UC maintains that there have been threats against Lt. John Pike since the November 18 pepper-spray incident.

There is, therefore, a fear that if other officers’ names would be made public, they would also be subjected to such threats.

Mr. Risher indicated that he does not know the specific nature of these threats, but noted that oftentimes these are not credible threats.  He did not completely discount the possibility of safety concerns, though he agreed that the distance in time from the initial incident would mitigate against such a direct and heated environment as Lt. Pike faced in the days and weeks immediately after the pepper-spray incident.

“That’s a very fact-specific determination as to whether the public interest in non-disclosure clearly outweighs the interest in disclosure because of the potential threat to the officers,” he added.

Mr. Risher also agreed that, while UC can argue for its non-disclosure, it will be difficult to prevent the public from knowing which officers were involved.  There are a number of ways that can become public.

It is our purpose and hope that this disclosure does not subject Officer Lee to any sort of harassment or threat.  He seems well-protected within the department as it is, and with the passage of more than four months since the incident, cooler heads should prevail.

Nevertheless, we hope that this will render the identity of the officer moot by putting his name into the public arena and move the process of release of the report forward.

Undoubtedly, some will disagree with this decision, but those are the reasons that we have chosen to move forward.

Share:
Previous : Occupiers Clash With White Supremacists At Capitol
Next : Vanguard Analysis: Where is the No On I Campaign?