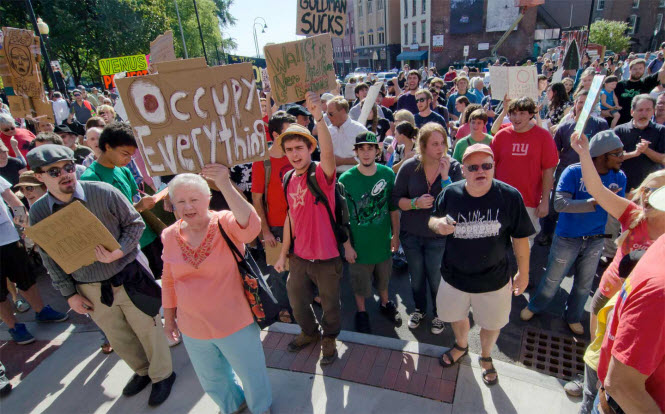 While UC Davis and hopefully UC is looking at changes to their policing policies in the wake of controversial incidents last November on both the UC Berkeley and the UC Davis campuses, the City of Oakland has made headlines this week with announced changes to crowd-control policies, due to the Occupy Protests.

In a press release on Monday, they stated that they are “committed to becoming a national leader in crowd management by reforming and improving its policies and practices.”

“It is our duty to protect public safety and at the same time balance the free speech rights of individual protestors with the rights of non-protesting residents,” said Police Chief Howard Jordan. “Since October 25, the Police Department has handled numerous Occupy Oakland events involving more than 60,000 people. Most events have gone without incident, but in the few individual cases of alleged and known police misconduct, I have acted quickly to investigate and hold officers accountable.”

Additionally, last December the City of Oakland hired an outside investigator to look at the department’s response to Occupy, and the Federal Monitor is conducting a separate review.

“Even before the final results of these external reviews are complete, we recognize that there is room for improvement,” Chief Jordan continued. “We are committed to immediately improving our training, tactics, and policies in light of our experiences.”

City Administrator Deanna J. Santana commended the chief for initiating efforts to reform the police department: “As I have said before, I am committed to leading an organization that acknowledges when we do things right, and that equally acknowledges the areas that require improvement or corrective action.”

“We are building a new police department with stronger ties to the community, so I thank Chief Jordan and City Administrator Santana for implementing new training, management practices and policy reforms week after week as we learn from our experiences,” said Mayor Jean Quan. “They have not waited for outside reports; our interactions with demonstrators and the community have already changed. This commitment to accountability is critical to build the trust necessary for real community policing.”

The Oakland Police have put forth five policies.

They have also examined community involvement by creating “a community advisory working group to review the Police Department’s crowd management policy and make recommendations on how to improve it.”

Mayor Quan and her staff, and police department staff, have met with individual journalists, photographers, and their journalistic organizations and representatives, the release said. “Training will be provided regarding media relations and press-related First Amendment Rights. By the end of April, every officer will have received training.”

They have modified their “use of force investigation strategy to make it more efficient and comprehensive. This includes assigning additional investigators to assess use of force incidents, improving the collection and review of evidence, and uses of force reports.”

Finally, with respect to the use of mutual aid, “The Police Department will be participating in tabletop exercises with outside agencies, has improved how it tracks their movement and uses of force, and met with them to discuss OPD’s crowd management policies.”

The LA Times reported on Monday, “The announcement of the shifting approach — which largely involves improved training, the use of small groups of officers to isolate troublemakers and clearer dispersal orders before arrest — also comes as the monitors of a decade-long federal consent decree are expected to release a report on the department’s handling of Occupy protests.”

However, the changes drew complaints from both the Northern California ACLU and the National Lawyers Guild who “demanded that the Oakland Police Department (OPD) explain if it plans to abandon its Crowd Control Policy, in favor of vague standards that fail to provide specific guidance to officers in the field and that invite a repetition of last fall’s botched handling of Occupy protests. OPD’s Crowd Control Policy provides essential guidance that aims to ensure demonstrators’ rights.”

Writes the ACLU and NLG: “The statement is troubling because it is unclear whether OPD intends to abandon its existing Crowd Control Policy in favor of POST guidelines. POST, or the Commission on Peace Officer Standards and Training, has adopted guidelines for crowd management that contain only very vague and general standards, which fail to provide officers in the field with clear guidance or to prohibit any specific, dangerous tactics which OPD has a history of using.”

“Even with clear directives in place last fall, OPD dramatically mishandled its response to the Occupy protests,” said ACLU-NC staff attorney Linda Lye. “If OPD eliminates important prohibitions against specific tactics from its Policy and replaces them with vague standards, it will invite a repetition or worse, rather than prevent a recurrence, of what happened last fall.”

“OPD and the Oakland City Attorney have repeatedly acknowledged that OPD is bound by the court approved Crowd Control Policy. It’s unclear why the police seem to think they can abandon it now, unless they are simply trying to deflect attention from the fact that OPD’s response to Occupy has violated nearly every aspect of its own Policy,” said NLG lawyer Rachel Lederman, counsel on the prior and current lawsuits against OPD.

“We were unimpressed and, in fact, kind of disturbed by this press announcement,” Ms. Lederman said of Monday’s news conference.

“The rampant use of flashbang-type grenades, that really has to stop,” she said. “Those are designed to cause panic and confusion and that’s exactly what you don’t want in a crowd. Actions speak louder than words and that’s what we want to see, is an actual change in the approach.”

This is no doubt that civil disobedience, particularly accompanied by large crowds, presents a real problem for law enforcement.  Conversations with various law enforcement officers suggest that they believe that the Occupy Movement presents unique problems for law enforcement as they have, in effect, changed long standing rules of the game.

On the one hand, the university, at least going back to 2007 when the Vanguard first covered civil disobedience and protests at UC Davis, has failed to be able to contain protests without the accompanied violation of rights and various controversies.  On the other hand, UC Davis is hardly alone in its difficulties managing civil disobedience in the last year, either among UCs or other police departments.

The Reynoso Task Force report has put forth recommendations for the university to change how it handles civil obedience and protest situations.  Those recommendations include an outside review of the UCD Police Department’s protocols and procedures.  That has already been implemented.

They also recommend more student involvement in an appropriate role in the police functions.  Furthermore, it “recommends the UC Davis police department should strive to be a model of policing for a university campus and ensure best practices are followed.”

At a more systemic level, they recommend UC student policy groups evaluate and adopt policies involving training and operations “to ensure that they reflect the distinct needs of a university community and utilize best practices and policing adapted to the characteristics of university communities,” as well as look into a policy with respect to the rules of the use of force.