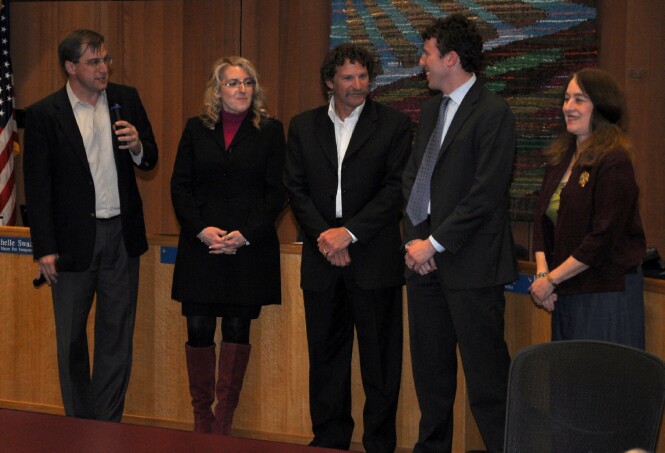 In the next four months, the Davis City Council is going to ask most, if not all, of its employees to take salary, retirement and benefit concessions in their round of bargaining that is ongoing.

At the same time, we have believed for some time that the councilmembers, given the work they perform and the hours they put in, are under-compensated for their service to this community.

The question for us is not if there should be a salary and increased compensation, but rather when is the appropriate time to do it.  Unfortunately, given current laws, the council is very constrained as to when and how and how much they can increase their own compensation.

Moreover, having to vote on their own compensation, even if it is a future compensation, is unseemly, and going into an election with three incumbents facing the voters, this should be a very uncomfortable subject.

According to the staff report for this week’s council meeting, “Government Code authorizes the City to provide Council members with an annual salary based on the city’s population.”  Salaries can be adjusted every two years and they would become effective only after a new council is seated in July.

They are constrained somewhat in how much they can increase their salary.  According to the staff report, “The amount may be increased up to 5% each calendar year since the last adjustment, non-compounded.”  However, “The Davis City Council has not adjusted its compensation since April of 2000, when the monthly salary was established at $669.49, or a total of approximately $8,034 per year.”

Staff recommends that “the City Council review the amount and consider whether there is interest in adjusting it, since the last increase was over a decade ago.”

Staff adds, “The City Council could increase the annual salary amount anywhere from 0% to 60% (12 years x 5% per year), or to a total of $1,071 per month. The City Council may choose to adjust the salary anywhere along the spectrum between 0% and 60%, via a Council-adopted ordinance.”

According to state law, any changes must be done prior to elections and would be effective after the June elections and once the new City Council is seated, or July 2012. In order to have something take effect for the 2012-2014 council, the current council would need to introduce an ordinance at the April 17 meeting and pass a second reading at the May 1 meeting.

If the city council were to choose to change their annual salary, “the cost to the City may range from $0 up to a maximum of $24,120 per year.”

While the Vanguard is sympathetic to ultimately raising council compensation, we believe that this is not the appropriate time to do it – at a time when the council is asking city employees to sacrifice and take concessions.

However, there are two changes the Vanguard does support.

According to the staff report, the Government Code establishes a limit on compensation for city councilmembers.  However, again, “the cost to the City may range from $0 up to a maximum of $24,120 per year.”

Specifically, “Any amounts paid by a city for retirement, health and welfare, and federal social security benefits shall not be included for purposes of determining salary under this section, provided that the same benefits are available and paid by the city for its employees.”

However, while the council is eligible to receive health benefits, they may “not elect to receive a cash-out payment in lieu of health benefits without running afoul of Government Code section 36516’s salary limitations.”

Thus Councilmembers could not participate in the city’s cafeteria cash-out plan that other employees receive.

However, the city attorney argues, “In 2006, the Attorney General held that contributions in lieu of health benefits paid directly to a 457 deferred compensation account was not the same as a cash payment and could therefore be provided to Council Members notwithstanding the compensation limits.”

The City Attorney believes, “The City can provide a $500 monthly contribution to a Section 457 deferred compensation plan on behalf of City Council members who do not use the City’s health insurance benefits without violating the statutory compensation limits.”

And she cites a number of other cities who have similar plans.

The Vanguard understands roughly four of the councilmembers are unnecessarily receiving full health care benefits, when they could opt for the deferred cash out.

The city’s analysis is that changes to the current health benefits could result in savings to the city.

Because this is a benefit that all city employees currently receive, in fact, the city’s goal is to make the $500 per month a uniform benefit as opposed to the current $18,000 per year for some employees, we believe it is fair that the councilmembers realize the same benefit and enable the city to save considerable money.

In lieu of increased salary compensation, the Vanguard would support raising the amount of travel expenses.  More than one councilmember noted the small amount of the travel fund and the fact that councilmembers have to largely pay out of pocket to attend even regional conferences and meetings, for which the City of Davis is a due representative on these bodies.

Councilmembers should not have to pay out of pocket for doing work on behalf of the city.  The Vanguard would like to see a full layout of expenses, the current travel account, and see how feasible it would be increase that amount.

In summary, the Vanguard believes that salary compensation at this time would be a political nightmare, given the state of current bargaining and budgetary considerations.  We believe ultimately in raising the salary.

The Vanguard believes that the $500 in lieu of health care is a no-brainer and that the council, instead of a salary increase, should analyze the need for travel expenses and adjust appropriately.

22 thoughts on “Should the Councilmembers Get Increased Compensation?”