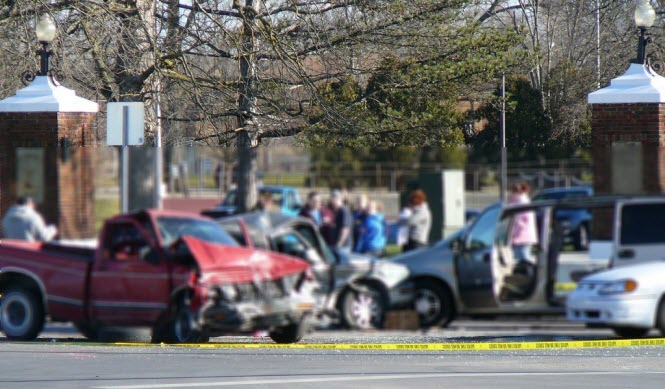 Imagine, a 17-year-old juvenile steals a car and leads the police on a high speed chase in one end of town, and on the other end of town, a police car turns on its lights and heads off to join the chase.  But just as it does so, it strikes a man crossing the street and hits him so hard that it severs the man’s body at the torso.

This is what happened this week in West Sacramento.  The Yolo County DA’s office would charge the teen, who was arrested after crashing into a parked car, with vehicle theft, felony possession of stolen property, and misdemeanor allegations of evading a police officer, resisting arrest and driving without a license.

However, there would not be a murder charge, according to Yolo County Chief Deputy DA Jonathan Raven.

The Sacramento Bee spoke with legal expert Ruth Jones, a law professor at McGeorge, who told the paper, “The felony murder rule typically is applied when the defendant is physically responsible for the death – say, a suspect who strikes and kills a pedestrian while fleeing police.

“I would say this is not the classic felony murder case,” Professor Jones said.

Mr. Raven told the Bee that they did not pursue the murder charge, in part, because it would require their meeting a different standard of proof.

Under a felony murder rule, the defendant may be guilty if, while committing another felony, the defendant did an act that caused the death of another person. The murder rule could be applied even if the killing were unintentional, accidental or negligent.

The defendant may [also] be guilty of murder, under a theory of felony murder, even if another person did the act that resulted in the death, according to the jury instructions on felony murder.

But to prove that seems more difficult, since part of the elements require some conspiracy to aid and abet, in addition to a causal relationship between the felony and the death, and the act causing the death and the felony.

In this case, it would be difficult to prove that the felony murder rule even applied, as it is the acts and potential mistakes of others impacted by the defendant’s decision to flee the police that led to the death.

At this point the police do not know if the officer acted in accordance to policy, with spokespeople acknowledging that the officer is on paid administrative leave, pending the outcome of an investigation by the California Highway Patrol.

Meanwhile, the victim himself, a 31-year-old transient, may bear responsibility here as he was reportedly drunk prior to the crash, “staggering through a nearby mobile home park and mumbling incoherently.”

Adding to that, “Many complained the area is dangerously dark at night and lacks crosswalks – [the victim] was jaywalking when he was struck.”

He had reportedly wandered into one of the witnesses’ mobile home parks and was described as walking in a “zig-zag” fashion and could not keep his balance.

The charging decision by the DA’s office is tremendously important, however.  With the murder charge, the defendant would have been tried as an adult and would be facing a sentence, potentially of life in prison.

Without the murder charge, the individual is being tried as a juvenile and could potentially put his life back on track and put this matter past him.

Aside from the charging decision by the DA’s office, the issue of vehicle pursuits needs to be considered, as well.  After all, one must really question the decision to conduct a high-speed pursuit in a case of driving a stolen vehicle and failure to yield.

“Vehicle pursuits have long been the subject of debate in law enforcement circles because of the inherent danger to bystanders as well as officers themselves,” the Bee writes.

The West Sacramento Police has its own policy: “The primary purpose of this policy is to provide officers with guidance in balancing the safety of the public and themselves against law enforcement’s duty to apprehend violators of the law.”

“Some agencies have grown more conservative, adopting more restrictive policies or more frequently canceling pursuits except in the most egregious of cases. Still, they are not uncommon. Sacramento police officers have been involved in more than 100 pursuits so far this year, according to that agency; Sacramento County sheriff’s officials estimate deputies engage in as many as six pursuits a week,” the Bee continues.

In a follow up article they note: “Advocates have called to end or curtail police pursuits, departments are reviewing their chase policies, and the issue has even been addressed by the U.S. Supreme Court.  A 2007 high court ruling permitted police to ram a fleeing suspect’s car to end a high-speed chase.”

These pursuits have taken a high toll: “In California, 470 people were killed in 404 crashes from 2000 to 2010, according to National Highway Traffic Safety Administration data. Nationally, the data showed nearly 4,000 fatalities were reported during the decade in some 3,400 crashes involving police pursuits.”

A number of jurisdictions have banned high-speed chases as a matter of policy.  In California, that may vary from jurisdiction to jurisdiction as California law only mandates the agency adopt a pursuit policy.

Under current law, SB 719 passed without opposition and was signed by Governor Arnold Schwarzenegger on October 4, 2005. “This bill would narrow the available immunity for public entities that employ peace officers when a third party is injured or killed in a collision with a person fleeing from peace officer pursuit. Such entities would be immune only if they: (1) adopted and promulgated a policy for safe conduct of motor vehicle pursuits that met minimum state standards; and (2) provided regular and periodic training for their officers regarding safe pursuits.”

However, critics complained that the measure did not go nearly far enough in reducing the number of pursuits in California.

As a group called Pursuit Watch says it “promotes safer pursuit policy and the elimination of unnecessary pursuits.”  They argue that “high speed pursuit should only be used when there is imminent and immediate danger to the public.”

They also support training for officers and mandatory prison time for those fleeing and eluding a felony.

Evidence suggests that the pursuit should be based on “the perceived severity of the offense committed by the fleeing suspect as the major factor in determining whether or not police should engage in or continue a chase. Therefore, policy might focus first on the type of offense and second on risks to the public, especially traffic patterns and congestion.”

The area of the accident is of particular concern, as the Sacramento Bee notes, “The area has few streetlights and no crosswalks, despite foot traffic between two bus stops on opposite sides of the street.”

Given the nature of the crime, which merely involved vehicle theft, and that the chase culminated in the suspect crashing the vehicle into a parked car, it seems that the threat to public safety was greatly enhanced by the decision to pursue the stolen vehicle.

We thus approve of the DA’s decision not to seek murder in this case, while at the same time we call upon authorities to reevaluate their vehicle pursuit policies and create a policy that only calls for pursuit in cases where there is a clear danger to the public, from not pursuing the suspect, that outweighs any danger and risk from the pursuit itself.

9 thoughts on “Commentary: Good Decision by DA Not to Charge Murder in Horrific Accident”