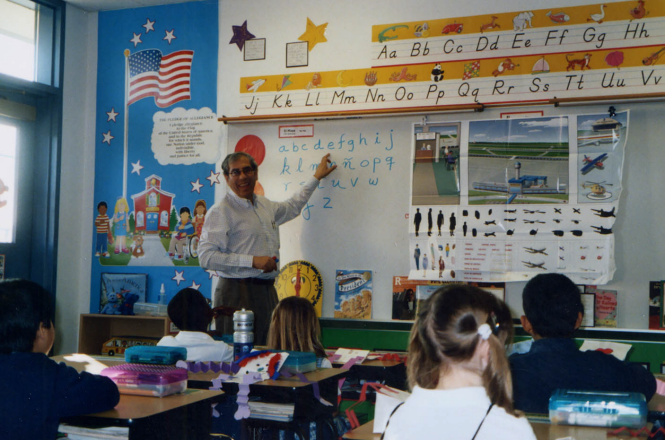 VANGUARD ANALYSIS – For those who knew little about Jose Granda beyond his advocacy against the district’s parcel tax, he shows himself to be an interesting and compelling figure.

But reaction to his piece this Saturday in the Vanguard, Jose Granda Beyond Measure E, was mixed.

“I would tend to doubt that any of the other candidates have as many qualifications as Mr. Granda,” a commenter writes.  Noting Dr. Granda’s “Yes On Total Commitment To Financial Responsibility To The Taxpayers,” the commenter adds, “I don’t feel like I’m getting that from the current regime but I know Granda will make sure our money is spent wisely.”

However, there are concerns.  This view is captured by another of the Vanguard‘s commenters as she writes, “You have an amazing and inspiring story of personal dedication and achievement in engineering and education and for that I applaud you.”

She continues, “I also agree completely with your ‘yes’ list. We clearly share the same broad vision and goals. What I would like to hear from you is a realistic plan of how you intend to do that with insufficient funds.”

And that is, indeed, the shortcoming that drives all boats.  In fact, it is the issue that, in many ways, dooms Dr. Granda’s vision.  You see, Dr. Granda is not what many might have believed, an anti-tax zealot who would have been content seeing the district get by with less – what he proposes costs money, probably far more than the district is currently spending.

People like to believe there is waste – the problem is that the district has been trimming the fat for five years now and there is not much fat to cut – certainly not nearly seven million dollars worth.  That leaves bone and muscle to cut.

Critics of the district point to the course offerings.  The problem is that, while it seems simple to cut a course that does not seem essential, if the course is full, there is little savings to derive.

What Dr. Granda offers as an alternative is not promising.

Writes the commenter, “What I would like to hear from you is a realistic plan of how you intend to do that with insufficient funds. And no, I do not believe that this can be achieved through grants, endowments, wills, tax deductible donations, etc. I f it could be achieved through these means alone, it already would be.”

Indeed, the most sustained effort has been the Davis Schools Foundation, which has been able to raise one-time monies as a means to supplement other shortcomings, but expecting a private foundation to be able to raise up to $10 million on an ongoing basis is not realistic, even in a climate where the parcel tax has lapsed.

The problem facing the district is even more acute now that it appears that Proposition 30 is in deep trouble.  Polling last week put it for the first time well under 50%, though technically still ahead at 46-42.  The truth is that the proposition had been teetering on the brink of the 50 percent mark for some time.

David Siders of the Sacramento Bee wrote this morning that one would have initially believed that Jerry Brown’s ballot measure “might have a better chance of passing than previous, failed tax initiatives [through] its potential to look more like a local issue than a statewide one.”

Mr. Siders writes, “Local revenue measures are typically easier to pass, and by signing a budget requiring billions of dollars in cuts to education if his ballot measure failed, Brown forced local school districts to publicly consider the effect of such an outcome on their schools.”

Indeed, Davis Joint Unified looked like the perfect example in that regard.  It put its own parcel tax on the ballot complete with contingency language to increase the amount should Proposition 30 fail.  The typical voter will pay far less under Proposition 30’s passage than the $246 they will have to pay if Proposition 30 fails but Measure E passes.

He writes, “I refer to Proposition 30, one of 11 statewide initiatives on the California ballot. This initiative, advanced by Governor Brown, would increase income and sales taxes on a temporary basis and thus avoid an assortment of prospective ‘trigger cuts’ that were written into the current State budget, pending the election outcome.”

He added, “As you probably recall, The Regents last summer took the extraordinary step of endorsing Proposition 30, noting that should it fail our budget will be reduced by $250 million. In addition, $125 million currently in the budget to ensure no increases in tuition through fiscal year 2012-13 will be forfeited.”

He makes it clear “that it is neither my official place, nor my personal predilection, to suggest how others should vote. You need to look at the facts and make your own informed decisions.”

But he is clear about the consequences of its failure, as well.

Chancellor Katehi writes, “I doubt any legislator or governor has enjoyed cutting state funds to our public universities and colleges, but they also knew tuition increases could offset some of the funding reductions.

“As a consequence, UC has been cut nearly $900 million over the past four years. UC Davis alone has lost more than $150 million in state funding.”

Chancellor Katehi argues, “But the sad truth remains: we are in danger of losing the ability to provide access to a high quality UC education to tens of thousands deserving California students.”

“The November election ballot contains a measure, Proposition 30, which is sponsored by Gov. Jerry Brown and carries potentially profound implications for California higher education and for our students,” she writes.  “The UC Regents have said that if Prop 30 passes, we will be able to hold the line on immediate tuition and fee increases.  The governor has said the additional revenue could also help return stability to both California and higher education and begin to renew the kind of support UC has received in the past.”

“Everyone understands this is not a perfect solution. Opponents say that small businesses will be harmed and that Proposition 30 raises taxes on all Californians, not just the wealthy. Supporters say it will help stabilize the state’s finances and prevent further deep cuts to public education,” the chancellor continues.  “However, there is no question that Proposition 30’s failure would result in the loss of an additional $250 million in state funding to both the CU and California State University systems. UC Davis’ share of the cuts could be $40 million.”

To that carrot she adds the stick, “To offset that loss, we would have to hit students with another annual tuition increase of roughly $2,000 or cut 285 faculty or 535 staff.  Any of those options would hurt our students and further erode the quality of public higher education in the nation’s largest state, the state that drives our national economy in so many ways.”

It’s another endorsement without endorsing, as she writes, “I can’t tell you how to vote, but I know I was blessed to have access to a top-flight education. It opened doors for me I never knew existed and transformed my life.”

Despite these efforts across the state by local government, from school districts to city and counties to UC and CSU, Mr. Siders reports, “the effort appears to be falling short.”

He writes, “Brown said as recently as two weeks ago that voters were not yet paying a lot of attention to his proposal to raise the sales tax and income taxes on California’s highest earners. To the extent that voters are paying attention, the message they have received has not primarily been a local one.”

The problem he faces is that the conversation has not focused nearly enough on the local issues.

Mark Baldassare, president of the Public Policy Institute of California told the Bee, “It just seems to me the conversation in the last few weeks has not been at all about local schools and local money. It’s been about the state as the intermediary.”

And that’s not a winning issue.

As Mr. Siders notes, “Local measures fare far better. Nearly two-thirds of the 87 local bond and tax measures on the ballot passed in California’s June election, including eight of nine local sales tax measures, according to an analysis by Michael Coleman, a municipal finance expert.”

“At the local government level, voters can usually connect the direct consequences of the passage or failure of a tax measure to specific public services or facilities – rather than just dollar values,” Mr. Coleman said in his analysis. “This confidence and understanding in what the money will do is essential to passing a measure.

“By contrast, a source of the failure of many statewide tax measures has been voter uncertainty about what the funds will truly be used for, that the government has done reasonably the best it can with the revenues it already receives, and what the consequences are of passage or failure in terms of specific important public services and facilities.”

And this is the problem that Dr. Granda has.  He has supported the notion of the state tax as a more fair tax approach.  On a number of levels he is correct, both in the overall need for all school districts to receive money, and not just wealthy districts like Davis.

Moreover, he is also right about the various ways in which parcel taxes, which by law cannot be means tested and are not proportional to land value, are unfair to segments of voters.

The problem is that if Governor Brown’s very modest tax measure, couched in local terms and gaining local government surrogate supporters, cannot pass in this climate – there is little hope that any statewide tax measure is going to pass.

Unfortunately, for all of his assets and immeasurable talents, that is the one area where Dr. Granda has fallen short.