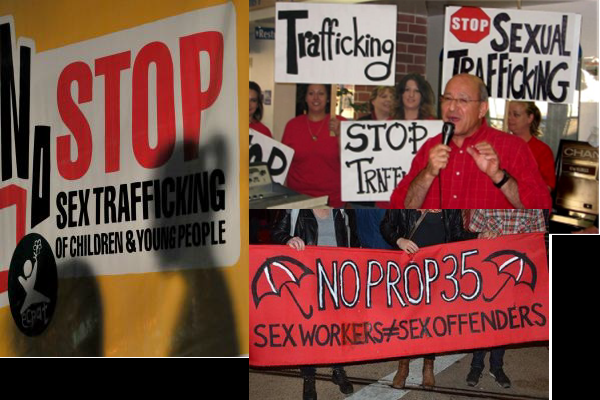 Human trafficking is a growing problem and Californians overwhelmingly supported the passage of Prop 35, which created harsher sentencing for those involved in human trafficking.

81 percent of the voters supported Prop 35, which will increase fines and prison sentences as well as require convicted human traffickers to register as sex offenders and disclose internet activities and identities.

Those convicted of human trafficking could face a maximum sentence of 12 years – doubling the previous penalty – and those whose crimes involved children could face a life sentence.

However, there are some more troubling aspects of the law, including the disclosure of internet activities and the expansion of the definition of human trafficking to include the distribution of child pornography.

As a result, the ACLU and Electronic Frontier Foundation (EFF) filed a federal lawsuit to block provisions that require registered sex offenders to give authorities a list of their internet providers and screen names.

U.S. District Judge Thelton Henderson issued a temporary restraining order until there is a full hearing November 20, arguing there are “serious questions” of constitutional rights to be considered.  He also noted that the provision could not be enforced anyway until March, so harm would be minimal in staying the order.

“Proposition 35 requires anyone who is a registered sex offender – even people with decades-old, low-level offenses like misdemeanor indecent exposure and people whose offenses were not related to the Internet – to turn over a list of all their Internet identifiers and service providers to law enforcement,” the ACLU argued in a press release.  “While the law is written very unclearly, this likely includes email addresses, usernames and other identifiers used for online political discussion groups, book and restaurant review sites, forums about medical conditions, and newspaper or blog comments.”

Under the law, more than 73,000 Californians must immediately provide this information to law enforcement, and must report any new account or screen name within 24 hours of setting it up, even if the new screen name is their own real name. Violations can result in years in prison.

The ACLU argued, “Proposition 35’s online speech regulations are overly broad and violate the First Amendment, both because they prohibit anonymous speech and because the reporting requirements burden all sorts of online speech, even when the speaker is using his own real name as a screen name.”

“The ability to speak freely and even anonymously is crucial for free speech to remain free for all of us,” said Michael Risher, staff attorney at the ACLU-NC. “Stopping human trafficking is a worthy goal, but this portion of Prop 35 won’t get us there.”

The suit was filed Wednesday in U.S. District Court for the Northern District of California on behalf of two individuals required to register as sex offenders and a non-profit organization, California Reform Sex Offender Laws – a group that believes that no sexual abuse is ever acceptable but that laws that paint all sex offenders with one broad brush are counter-productive. The California Reform website allows people to comment on posts and they regularly do so, generally under pseudonyms.

“Requiring people to give up their right to speak freely and anonymously about civic matters is unconstitutional, and restrictions like this damage robust discussion and debate on important and controversial topics,” said EFF Staff Attorney Hanni Fakhoury. “When the government starts gathering online profiles for one class of people, we all need to worry about the precedent it sets.”

In response, the Prop 35 proponents argued that suits like the one filed have been regularly rejected by the court.

Leah Albright-Byrd, Human Trafficking Survivor and Advocate said “Californians overwhelmingly said they stand by survivors and victims of human trafficking.  Prop 35 was designed to protect vulnerable women and children from exploitation on-line and off-line. It will finally bring justice for those who have lived through these horrific crimes.”

Chris Kelly, Former Chief Privacy Officer for Facebook, and founder of the Safer California Foundation argued, “Last night, the voters of the State of California made Proposition 35 the most popular initiative in the history of our state.”

However, it could also be argued that, while most voters supported the concept of making the laws tougher, that does not make the provisions lawful.

Mr. Kelly added, “The ACLU and EFF challenge to Proposition 35 is an attack on the very idea of sex offender registration requirements to protect kids and adults alike. Proposition 35 follows the pioneering approach I first took with New York Governor Andrew Cuomo of extending these longstanding registration requirements to include online identifiers so law enforcement has better information to fight trafficking and apply the law online.”

He too noted, “The ACLU’s claims have been previously litigated many times, and courts have repeatedly rejected their fanciful and dangerous misinterpretations of the Constitution.”

Daphne Phung, founder of California Against Slavery argued, “A broad coalition of survivors, advocates, law enforcement and now millions of Californians supported this initiative to stop human trafficking and stand with survivors. Our first priority is to protect women and children from being trafficked and to use all the legal tools available to protect them on-line and everywhere.”

The problem, as the suit notes, is that the statute requires “that 73,000 Californians who are required to register under California Penal Code § 290 as a result of being convicted of a sex-related offense to immediately provide the police with their Internet identifiers and service providers. These requirements, enacted as part of Proposition 35, cover individuals who were convicted of a wide range of crimes, including misdemeanor indecent exposure, at any point since July 1, 1944, and they require registrants to provide information about online activities that have no possible relationship to criminality, such as the screen names they use to post comments about articles on a newspaper’s website or names that they use to access political discussion groups.”

As the suit notes, “These new requirements burden the online speech of all such persons, infringe on their right to engage in lawful, anonymous speech on the Internet, and require them to reveal their membership in online groups, including groups devoted to political reform. Because they sweep much too broadly in terms of who must comply with them and the types of information they must provide, they are overbroad, in violation of the First Amendment.”

The suit adds, “The statutory definitions of ‘Internet identifier’ and ‘Internet service provider,’ which do not comport with the common understanding of these terms, are unconstitutionally vague. As a result of these and other constitutional infirmities, the statutes are facially invalid and cannot be enforced.”

Share:
Previous : Appointment of Carmichael to Chief For One Year Raises Questions
Next : Davis Enterprise Endorses Measure I