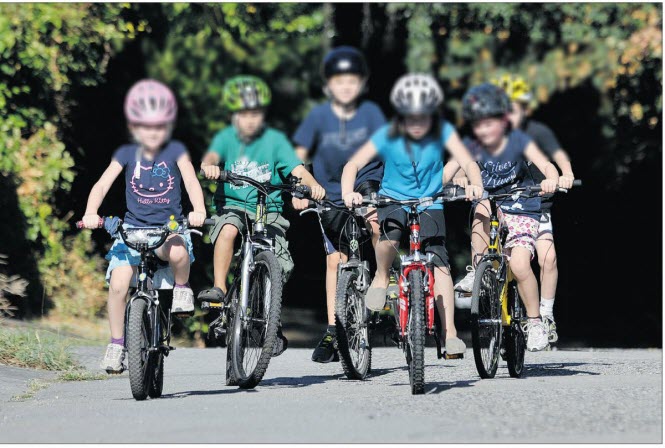 If you drive your child to school, you decrease your child’s ability to learn the rest of the school day.

On the contrary, when children walk or bike to school, instead of being driven in a car, they concentrate much better and the effects last for a while.

This is one of the main conclusions of a study (http://www.foodoflife.dk/opus.aspx: in Danish) of 19,527 school children ages 5 to 19 just published by Niels Egelund, a professor at Aarhus University in Denmark. The results were made public recently by the research center OPUS, at the University of Copenhagen.

The study investigated the connections between diet, exercise and the ability to concentrate for school students of all ages. Among its many results, one really stood out: Children have less concentration if they do not exercise on the way to school.

The children were asked to answer questions about their exercise behavior and complete a simple concentration test (one such exercise involved putting together a puzzle composed of face pieces) and they were scored for correctness.

Children who made the trip to school by themselves performed far better than those who were transported to school by car or public transportation (bus or train).

“It is quite interesting that the exercise it takes to transport oneself to school directly reflects on the ability to concentrate, even four hours later in the day,” professor Egelund said. “Most people know how refreshed one feels after using one’s body, but it is surprising that the effect lasts that long.”

The study also showed that children who exercise more than two hours a week outside of school have a concentration advantage during the school day when compared to their more passive schoolmates.

“This result means that the parents have an enormous responsibility. I have a child in third grade and a child in ninth grade. I find it a great pity to see how many students are driving to school.  You see long lines of cars in front of the school; some drove a very short distance. Parents should really pull themselves up by their bootstraps,” observed Professor Egelund, who also also encourages parents to have their children play a sport or other physical activity, to avoid having the children sit in front of the computer or TV for many hours a day.

“We need to try to keep young people active, so that they increase their ability to learn,” he said.

The connection between learning with your head and our need to move around is still not completely mapped out.

“I believe that deep down we were naturally and originally not designed to sit still,” Professor Egelund said. “We learn through our head and by moving. Something happens within the body when we move, and this allows us to be better equipped afterwards to work on the cognitive side.”

The Danish study also found that more Danish students walk or bike to school compared with Davis students for every school age group. A local tally bySafe Routes To School shows that in Davis, more than 60 percent of elementary students are driven to school.

Davis has the best bicycle infrastructure in the United States. If it is possible anywhere in the U.S. for students to walk and bike to school, it should be easiest and safest here in Davis. Clearly, more students should be walking or biking to schools in our city and this requires a change in mind-set for the school district and the entire town. Mainly though, it will be good for the children.

Written based partly on a translation by Sanne Fettinger, parent and volunteer active transportation coordinator of the Scan & Notify program at Birch Lane School.