This past week, the Vanguard wrote an analysis questioning the results of a poll released by the Yes on Measure I campaign, which showed the surface water project passing by a wide margin of 63-11%, with about 26% undecided.

As we wrote on Saturday, that is not to argue that Measure I is not ahead – it may well be.  Nor is there indication it will not prevail – and may even prevail by large margins.  What I will argue is that 11% opposition is too low and that we should take these results with a healthy degree of skepticism.  Because of the limited release, we only have circumstantial evidence here, but we have the school tax election results and the 2011 polling by the district on voter priorities that suggest that number is far too low.

That being said, the No on Measure I campaign is largely nowhere to be seen.  The opposition to the surface water project has conceded from the start that they would be resource-challenged.

Indeed, the proponents of the water project have the business community, developers and the building trades unions, that could all contribute money if needed.

But, as we have noted in the last two election cycles, campaign expenses have gone down and not up.  To date, there is little to indicate large expenditures by the Measure I campaign.

What we have seen is an effective use of a social media and communications strategy.  None of this costs money, and all of this could be done quickly and easily.

The “Clean Water For Davis” page on Facebook has received 405 likes already.  The Facebook page has daily posts with articles and recruitment information for volunteers.

For example, on Sunday, the page shared a link to the op-ed by members of the Citizens’ Water Advisory Committee in support of Measure I, quoting from it, “To delay is to ignore community consensus and the facts, endangering our future water supply for generations to come.”

Earlier in the week, they quoted from Alf Brandt in the Vanguard article, “The Davis-Woodland Water Supply project ensures that Davis for decades to come will have a clean, safe, and sustainable water supply.”

The Measure I campaign has sent out a number of press releases. Last week, the campaign got a lot of mileage out of their press release on the poll.

One article that the Vanguard did not print was the endorsement by Tuleyome.

“Supplying our city’s water by mining groundwater is not sustainable or environmentally responsible. It is bad for the residents, can result in permanent damage to our ground water aquifers, and the discharge harms our surface waters,” commented Tuleyome President Andrew Fulks. “Jointly using our surface and groundwater supplies maximizes our long term water security. Decreased city use of groundwater also helps with long term security of the groundwater our farmers need to grow our food.”

Tuleyome appreciates recent efforts by the City to ensure that the costs of the program are shared among citizens in the most equitable manner. “It is expensive, but we must act now,” commented Bob Schneider, Tuleyome’s Senior Policy Director.

“Opponents of Measure I argue we can delay the City’s program because the City now has rights to Sacramento River water,” added Mr. Schneider. “This is a foolish conclusion, based on a lack of understanding about the current context of water in California. Water rights are tighter than ever. Right-holders who do not use their water rights risk losing them forever. We will have to compete with thirsty cities in the south for our water if we don’t move forward.”

In a modern campaign, the use of free media and social media is essential to mobilizing a movement, recruiting volunteers, and spreading the word with a minimal expenditure of time or money.

But a lot of the opponents of the project have not engaged in the debate over the project in the comment center of the Vanguard.  These articles are being widely spread and widely discussed.  However, for the most part, the Yes on Measure I side has dominated the discussion.

An effective campaign would not only be cheap and relatively labor unintensive, but it would be effective.

In the meantime, we are starting to see the more traditional campaign complaints. 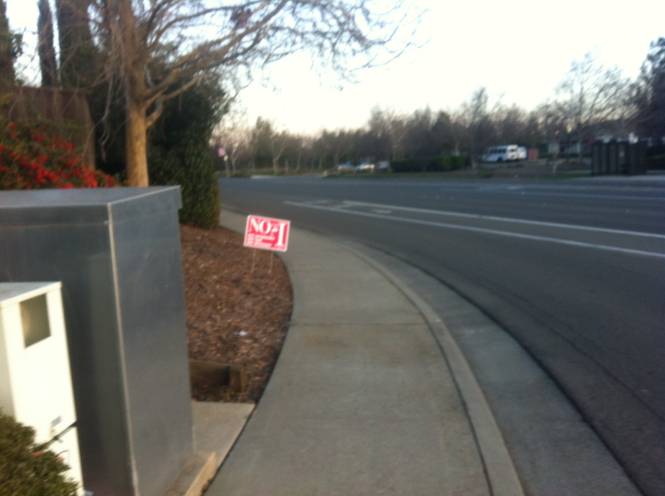 For example, on Monday, the Vanguard received a complaint from the Measure I campaign that the opposition was placing their signs in public right of ways and other restricted areas such as the sign pictured in a photo sent from the campaign. 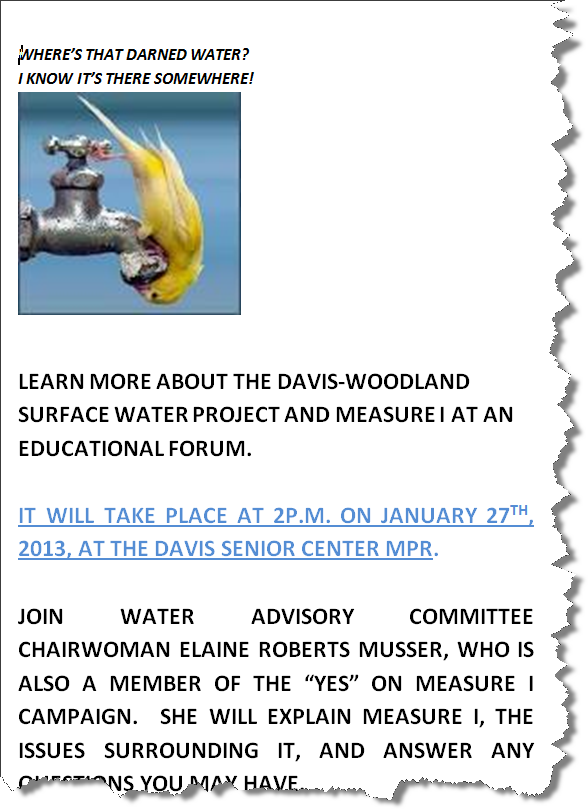 On the other hand, the No on Measure I side complained that on January 27 at the Davis Senior Center there will be an educational forum where the surface water project will be discussed.

The invitation mentions, “Join water advisory committee chairwoman Elaine Roberts Musser, who is also a member of the ‘yes’ on Measure i campaign.  She will explain Measure I, the issues surrounding it, and answer any questions you may have.”

As the campaign notes, No on I was not given notice of this, and not invited.  The Senior Center is city property and this is tantamount to a campaign event on city property without both sides being included.

“This is worse than anything that the Yes on Measure X committee every tried to do,” the campaign complained.

We still have two weeks before the ballots go out, but the opposition clearly needs to become far more visible if they have any notion of defeating the measure.

32 thoughts on “Vanguard Analysis: Where is the No On I Campaign?”