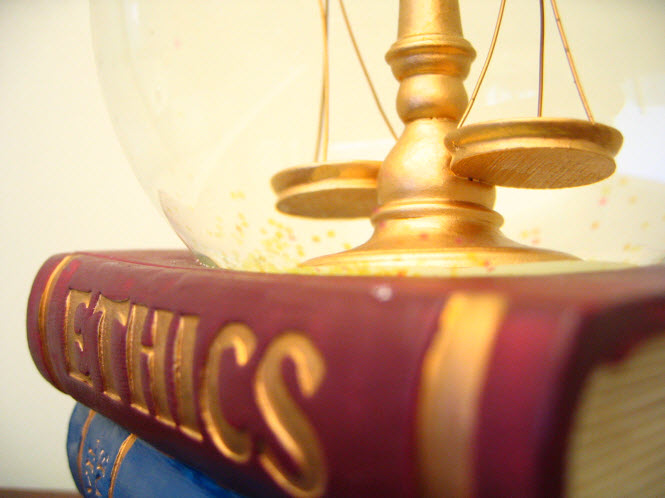 Twice in the past month I have been faced with a “laws vs. ethics” conundrum. The first came as part of a development application review process conducted by Yolo County’s South Davis General Plan Citizens Advisory Committee (the “committee”)  regarding a proposal for eleven homes on the south side of Montgomery Boulevard (just south of Willowbank) under the provisions of the Yolo County Ag Cluster Housing Ordinance.

The second came yesterday as part of an ongoing discussion of how to assess the fairness of the Supply Charge in the CBFR rate structure.

In the first case a number of neighbors of the proposed development formally submitted e-mails to the committee raising concerns about the Ag Cluster Housing Ordinance’s past, present and future.

The committee decided that formal acknowledgement of and discussion about the submitted e-mails in a noticed meeting would allow the committee to deal in a very focused and public way with the committee’s BOS-provided charge.

The minutes of the noticed meeting would document the discussions of the BOS-provided charge topic, and that way when the same issue about what  the committee does and doesn’t do inevitably surfaces in the future, the committee would be able to refer people to the 1/15/2013 meeting minutes that will permanently reside on the Yolo County website.

That was the plan, but that plan proved to be unacceptable to a number of the neighbors.  They wanted the committee to disregard its charge and weigh in actively on the validity of the ordinance.

Despite the fact that the committee gave the neighbors clear guidance about where neighbors should send their concerns (to the Planning Commission and the Supervisors and Planning Department Staff) about the ordinance, frustration (even anger) was present, and one neighbor wrote all five Supervisors, all seven Yolo County Planning Commissioners, all five Davis City Council members and several staff members saying, “We are disappointed that the Yolo County, nor members of the South Davis Citizens Advisory Committee, have made any attempt at direct outreach regarding our concerns.”

The writer of those remarks clearly believes that the committee should have 1) thrown rules/laws aside and 2) discussed the ethical flaws of both the ordinance and the process that caused the ordinance to be passed into law.

In the second case one of the posters here on the Vanguard said, “Behind each correct law is an ethical principle. Ethics decides whether a law is correct. While it is lawful to abid by the law. It is ethical not to lose sight of true fairness. How do you decide if a law is correct? Is it possible for a law to be incorrect? If so, whose responsibility it is to identify them and remove them from legislature?”

As I read that post and also thought back to the words of  the frustrated and angry Willowbank neighbor, two thoughts came to mind.

My first thought was that “Yes, laws an be incorrect, and yes we (as a society) should identify such incorrect laws and work to have them modified or eliminated. However, until those laws are formally changed they are the law of the land, and we have no choice other than to obey them.“

My second thought  took a wider view toward one particular legal reality that exists here in the United States . . . Roe vs. Wade.

Some people believe that Roe vs Wade is totally and completely unethical.

Just as many people believe that Roe vs Wade is totally and completely ethical. How do you resolve that difference in those widely (wildly) different ethical perceptions? Is the disconnect that exists within our society about the ethics of Roe vs. Wade simply a  “framing” conundrum”?

Or is it something much more fundamental?

Matt Williams has been a resident of Davis/El Macero since 1998. Matt is a member of the City's Utility Commission, as well as a former Chair of the Finance and Budget Commission (FBC), former member of the Downtown Plan Advisory Committee (DPAC), former member of the Broadband Advisory Task Force (BATF), as well as Treasurer of Davis Community Network (DCN). He is a past Treasurer of the Senior Citizens of Davis, and past member of the Finance Committee of the Davis Art Center, the Editorial Board of the Davis Vanguard, Yolo County's South Davis General Plan Citizens Advisory Committee, the Davis School District's 7-11 Committee for Nugget Fields, the Yolo County Health Council and the City of Davis Water Advisory Committee and Natural Resources Commission. His undergraduate degree is from Cornell University and his MBA is from the Wharton School of the University of Pennsylvania. He spent over 30 years planning, developing, delivering and leading bottom-line focused strategies in the management of healthcare practice, healthcare finance, and healthcare technology, as well municipal finance.

11 thoughts on “Conflicts Between Laws and Ethics”