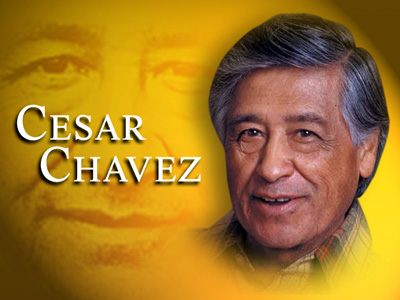 Editor’s Note: This column is re-printed from one published on April 1, 2007.

On August 18 of 2000 state legislation was signed to establish Cesar Chavez Day in California. For many farm workers it was finally an opportunity to honor a man who organized them, led the largest grape industry boycott and formed the United Farm Workers requiring growers to bargain with farm workers who vote for unionization. For many it’s a day to show respect to a man who demanded respect for those, who like him, toiled in the fields day after day.

For me however, it is one out of 365 days, in which I remember a woman, who like Cesar, had motivation sufficient to act. She had “ganas.” A woman who thought of others. A woman who fought for the rights of others in the fields in injustice. A woman who led a strike with her co-workers, marched in on the boss and demanded that cold water, toilet paper and paper towels be provided at all times or they would walk. A woman who got what she wanted because Don Pedro knew that although he could get others to do the work they would not be as dedicated, hard-working, and honest as a woman named Adela Cardona Muñoz Escamilla, lovingly called Doña Adela by my four brothers and three sisters.

It’s another day to honor Adela, my father, and my seven siblings who laid the foundation for us to have a better life. It’s a day to honor those who worked hard in the ninety plus degree weather with the sun scorching down on them while donning long sleeved shirts and hats to protect themselves from being sunburned or worse yet getting skin cancer. It’s another day to honor my family for doing the back breaking work that would put food on the table, keep a humble one bedroom roof over our heads and help my family work towards having a better life.

I remember at the young age of four I would slowly wake up at 4:00 a.m. to the amazing smell of homemade flour tortillas being made. I could hear the rolling and light pounding of the “home made” rolling pin that had been cut by my father, Rafael, and given to my mother for making homemade tortillas for the family. The rolling pin was made from a piece of metal pipe that had been cut and filed so the edges would be smooth. A rolling pin those days might only cost a dollar or two, but that money could be used to buy beans, rice, or flour, so it was not something we could afford. Doña Adela could easily pound out a few dozen at 4:00 a.m. She loved to joke that if anyone ever broke into our home they would have not only the family to deal with, but they would have the “palote” to deal with too. I actually slept with “the palote” in my lap while sleeping at rest stops as I drove alone from St. Louis, MO to California back in 1998 upon finishing a post-baccalaureate Executive Fellowship with the Coro Foundation. I didn’t want to risk leaving my car full of one year’s worth of living in St. Louis, so I slept in my car. The “palote” protected me.

At 4:00 a.m. my mother wasn’t just making the tortillas for herself, she was making them for her co-workers who worked in the fields with her, for the neighbors, and others whom she knew were struggling to make ends meet. I would ask her, “why not get a little more sleep mom?” She would always say, “There’s no time to sleep. People are struggling to make ends meet and if we can help them it might make their day better. We must think of others Ceci not just ourselves.” It’s not as if we weren’t struggling ourselves. But, you would never know it. Well, she knew it, and I’m sure my brothers and sisters knew it, but as a young girl, with a loving family all around me I felt that I had everything I needed.

California established the Cesar Chavez holiday to honor Cesar and the work he’s done, but it’s not enough. When are the people going to rise again? When are elected officials going to pass legislation to protect farm workers from the same life threatening pesticides that took Doña’s life at the age of 63? We have warnings telling us to wash our fruits and vegetables. We have parents concerned about the pesticides that their children are exposed to sprayed on the fruit and vegetables that they eat. Why then why can we not be concerned about the men, women and children who are with them at times, who are exposed to the pesticides? When are we, like Doña Adela, and like Cesar Chavez going to have the “ganas” to demand for a change in the laws?

Cesar once said, “We can choose to use our lives for others to bring about a better and more just world for our children.” We have accomplished many things in the last fifty years or so. We have progressed greatly, but every year on Cesear Chavez day, we are reminded not only of how much we have accomplished, but how far we have to go. There are still people who toil in very harsh conditions. There are people who work very hard without receiving an honest day’s pay. And, there are people who work very hard and do not have access to health care. It is for these people who we remember Cesar Chavez and continue to fight for a better tomorrow.

Join the City of Davis Today at 11:00 at Central Park for Annual Cesar Chavez Day Celebration

The 13th annual Davis César Chávez Celebration will be held on Saturday, March 30 at 11:00 a.m. in Central Park, weather permitting, during the Davis Farmers Market. The free event is sponsored by the City of Davis Human Relations Commission. Community members, especially children and families, are invited to attend.

The City of Davis is pleased to present as Keynote Speaker Mr. Francisco J. Dominguez, a Sacramento-based documentary photographer, multi-media artist and historian. Mr. Dominguez has documented the plight of immigrants, homeless and farmworkers in the United States for the past 20 years, focusing on the lives of those who have been directly affected by US economic trade policies. He uses his work to bring attention to the injustices on the Mexico/US border.

The Chavez event will also feature live music, singing and dancing. Davis is once again fortunate to have its own Cesar Chavez Elementary Choir, which will perform several songs in both English and Spanish. The choir is under the direction of Ximena Jackson and has delighted the audience in years past. A new addition to the festivities this year will be Mariachi Puente, a mariachi group comprised of Davis junior high and high school students.

The event commemorates the anniversary of César Chávez’s birthday. Chavez spoke at rallies in Davis’ Central Park during the tomato growers’ strikes in the 1970’s. One Chavez rally in Davis on August 11, 1974 was reported to have drawn over 2,000 attendees.

The Chavez Celebration will be the focal point of the festivities held in Central Park which features one of California’s oldest continuous farmers markets. The Davis Farmers Market attracts thousands of visitors every Wednesday and Saturday and has been in operation since 1974. It was the first market in California to offer organic produce.