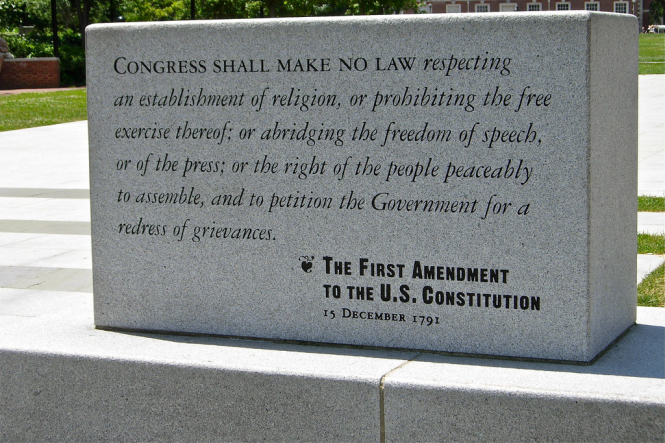 While many criticize the Vanguard for allowing anonymous or pseudonymous posters, we take the issue seriously.  We prefer respectful discourse, we also recognize that there are times in a small community like this one that people need to protect their identity and the ability to speak out without fear of retribution or social ostracism.

The Reporters Committee for Freedom of the Press was founded in 1970s and provides “free legal support to thousands of working journalists and media lawyers each year. It is a leader in the fight against persistent efforts by government officials to impede the release of public information, whether by withholding documents or threatening reporters with jail.”

This week, they filed an amicus brief in the Virginia Court of Appeals, in the case of Hadeed v. Yelp calling “for a heightened standard of judicial review before anonymous online commenters are identified” and urging “the court to revisit a lower court’s order compelling the disclosure of an anonymous criticism of the services of Hadeed Carpet Cleaning posted on the online review site Yelp.”

The case stems from the attempt by Hadeed Carpet Cleaning to seek the identity of unidentified individuals who posted anonymous reviews on “Yelp” which is a popular online review web site.

The reviewers – seven of them -stated that their service charged significantly more than the advertised price or charged for work that had not been performed.  The company believes that what was written was false and defamatory, however, other customers made similar comments on Yelp without being sued by the company.

The company also alleged that the reviewers were working for competitors and thus the purpose of the negative reviews was to make the business look bad.

The company then subpoenaed Yelp, seeking documents to help identify the seven commenters.  Yelp objected, arguing that the users had the right to post and those rights would be violated by identifying them.  However, the trial court, ruled for the company and ordered Yelp to abide by the subpoena and provide the requested information to the plaintiff.

Yelp has yet to comply with this order, instead asking the plaintiff to name any reviewers it believes were employed or connected to competitors so that it might investigate. The carpet cleaner has not taken Yelp up on this offer.

In their amicus brief, the Reporters Committee argue, “The trial court erred in not recognizing the constitutional right to speak anonymously.”

“The First Amendment protects the right to speak anonymously across a broad spectrum of subjects, whether the expression at issue relates to most important political concerns of the day or, as here, the quality of service of a carpet cleaning company,” they argue. “The trial court’s order suggests anonymous speech is “not entitled to the same level of protection as truthful or political speech,” but neither of the cases it cites stands for this proposition.   Instead, there is a robust body of precedent affirming the importance of protecting anonymous speech under the First Amendment.”

“Protecting the identity of someone posting an anonymous review on Yelp or any other website is crucial to protecting speakers’ First Amendment rights and the public good,” the Reporters Committee stated in a press release.

“By offering only a minimal discussion of First Amendment interests at state, the trial court failed to fully acknowledge the extent to which the First Amendment restricts compulsory identification of anonymous speakers on the Internet,” the brief to the Court of Appeals argued. “When faced with questions of compelled disclosure of anonymous online speakers, this Court must adopt a meaningful standard that requires a heightened showing of evidence of a valid claim and notice to the affected parties.”

“This standard is essential to protect the interests in anonymous speech, which often serve the public good and contribute to a better understanding of public issues and controversies,” according to the brief, which was joined by the American Society of Newspaper Editors, Gannett Co. Inc., and the Washington Post.

“Courts around the country have established certain benchmarks that must be satisfied before compelling the disclosure of an anonymous commenter,” said Reporters Committee Executive Director Bruce D. Brown. “First, there ought to be tangible evidence that the comment was false and defamatory and, second, speakers should be notified that an action is pending. To do otherwise would be to inhibit robust debate.”

In their brief they argue, “While journalists will typically develop sources and gather information before publishing a news article, that method can never ensure that all parties with information to contribute can be heard.”

Thus many news sites, such as the Davis Vanguard, allow for comments to be posted anonymously.

In their brief, they acknowledge the potential shortfalls of anonymous posts, but argue, “While a large amount of these comments may contribute little to the public debate as posters engage in online arguments influenced by their personal politics, some of these comments have prompted further investigation by journalists and more in-depth follow-up articles. Without the guarantee of anonymity, many of these posters would have never shared their information and the public would have been less informed.”

The Vanguard support for anonymous posters rests with the fact that we were born out of an issue of controversy where a large number of people feared speaking out for fear of reprisals.  Sometimes this right is inconvenient and often it devolves into petty bickering for little advantage.