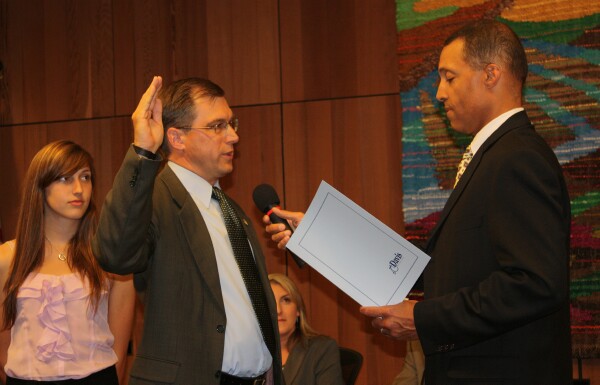 After much speculation, Davis Mayor Joe Krovoza has announced this morning that he will be running for the State Assembly to succeed Assemblymember Mariko Yamada in the newly formed Fourth Assembly District.

“I’d like you to be among the first to know some exciting news from our family,” said Mayor Krovoza in a statement Friday morning.  “I will run for the California State Assembly seat (“Assembly District/AD 4″) that will open next year when my friend Mariko Yamada concludes her term. My four-year term on the Davis City Council and service as mayor will conclude in June of 2014, when the primary will be held for the Assembly seat.”

Joe Krovoza becomes the second known candidate in the field.  Anthony Ferrington, a Lake County Supervisor announced approximately two months ago his run.  There is additional speculation, that Mayor Pro Tem Dan Wolk, whose mother is State Senator Lois Wolk, may jump into the race as well, which would set the stage for a spirited battle.

Joe Krovoza was elected to the Davis City Council in June 2006 and finished a commanding first, winning all but one precinct.  He became Mayor in January 2011 when Don Saylor resigned his seat to be sworn in as County Supervisor.

“I have led Davis as mayor since January 2011 and have learned much about the interplay of local, regional and state government, and what it takes to bring people together to solve our most challenging issues,” said Mr. Krovoza.  “As you know, I am passionate about sustainable fiscal and environmental systems, the value of education, the need to both celebrate and respect our differences, and the imperative to address climate change through clean energy and improved transportation systems.”

He added,  “I am exceptionally proud of our accomplishments in Davis during these recent and trying economic times.”

Joe Krovoza was a critical voice on the city council helping to push through fiscal reform, joining in the critical 3-2 majority in June 2011 on a budget that would eventually pave the way for structural reform.  He took a leadership position as well on fire staffing and is a member of the JPA for the Woodland-Davis Clean Water Agency helping to usher in the surface water project.

He has worked throughout his term on the City Council at Institute of Transportation Studies and Energy Efficiency Center.

“Through my day job at UC Davis’ Institute of Transportation Studies and Energy Efficiency Center I am privileged to work with some of the state’s most innovative minds, and I know I can continue to translate our collective expertise into effective policy,” Mr. Krovoza’s statement continued.

He added, “I would relish the opportunity to bring these experiences to the California Assembly, and a district that includes Napa and Lake Counties, and parts of Sonoma, Solano, Colusa and Yolo Counties, including the cities of Winters, Woodland and Davis, and the UC Davis campus.”

“I do not take this decision lightly, and have been considering this opportunity to extend my public service for the past several months. I invite you now to join me in this campaign, and to share with me your visions for the district and the state,” he said.

Mr. Krovoza’s term expires in June 2014 along with Councilmember Rochelle Swanson.  His decision opens up a seat on the council for a new challenger.  Councilmember Swanson has not officially announced but those close to her have told the Vanguard she intends to seek reelection.

17 thoughts on “BREAKING NEWS: Krovoza To Run For Assembly”