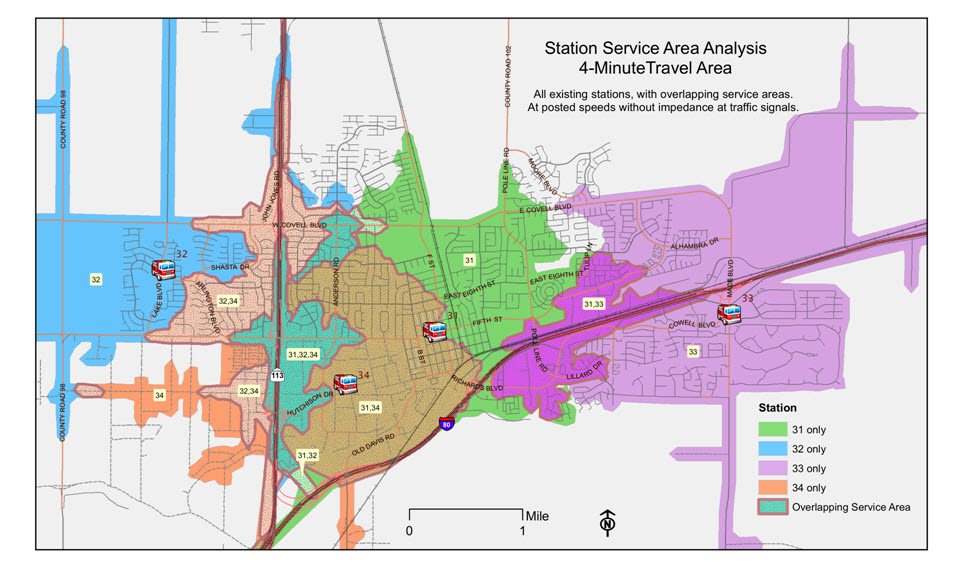 If it seems like I have been fighting this battle for a long time, it is because I have.  It was nearly five years ago, that I realized, despite the justifications for four on an engine, most fire stations have three on an engine.  While it is true that they have more fire stations than Davis, it is also true that Davis has one of the fewest calls for service per capita of comparable communities.

Couple that information with the asset that we have at UC Davis, and suddenly we have a no-brainer.  While I disagree with the council on a number of their points of justification, I understand that, unlike them, I am not running for political office and I can say this: the current system makes little sense from a public safety standpoint, and looking at a map makes it clear we need to move the central fire station.

I will say this, from talking to Councilmember Rochelle Swanson afterwards, I am not sure that she would have voted for the staffing change without the accompanying move of the station, but it definitely gave her a softer landing spot to cast what was a tough vote.

I appreciate her comment that, just because one wants to change the status quo, does not make them anti-firefighter.  People make a lot of assumptions based on limited information, and I get that this is the nature of this gig.  At the same time, I want to point out that when I criticize the firefighters or the union or policies, I am often accused of being anti-firefighter, just as I am anti-police when I critique police action and anti-prosecutor when I criticize the district attorney’s office.

So let me state unequivocally that I am not anti-firefighter, I am anti-corruption.  I am not anti-union, I am against the excesses of this union and the tactics that this union has taken to achieve their end goals.

To that end, the first message I got last night was from a firefighter, thanking me.

During the discussion last night, the accusation was made that the staffing changes were devised by those who were not firefighters.  Clearly, the shot was being leveled at City Manager Steve Pinkerton, Police Chief Landy Black and Assistant Chief Steve Pierce.

City Manager Pinkerton took exception to these remarks, and rightly so.  They ignore some honest truths here.  First, that the plan was created by former Interim Chief Scott Kenley.  Now, from their conversations that occurred at Pioneer Elementary School a few months ago, it is clear that the firefighters’ union, led by Bobby Weist who was apparently on vacation last night and not in attendance, did not think much of Mr. Kenley.

However, there is an unsung hero in all of this and that is Division Chief Shawn Kinney.  Last night, Shawn Kinney provided critical information and something that the rest of the firefighters lacked – perspective.

Mr. Kinney agreed with the firefighters’ concerns, arguing that four on an engine is clearly better than three.  “What this comes down to is four is better than three,” he said.  However, he argued that the Kenley plan allows for the increased ability to respond with a quicker and more agile force that, in many cases, can eventually bring more units to bear on an emergency.

Mr. Kinney deserves our respect and gratitude.  For years, he stood up to the firefighters’ union and their president, and was vilified for it.  The easiest thing for him to do last night, in the face of numerous people that he has to command, was to cave to their demands, but he stood tall and provided critical information to the council that allowed them to make a reasoned decision.

It was he who helped design the staffing model that is moving forward.

But the firefighters’ criticism also misses the mark.  Watch the movie Moneyball – it’s the true story of Billy Beane, the GM of the Oakland Athletics.  In the face of dwindling resources he could not compete for the star players with the likes of the New York Yankees.  Instead, he brought in a math guru, who had never played baseball, to construct a database to analyze stats and look at baseball in a new way.

Police Chief Landy Black deserves a tremendous amount of credit in this process.  When he was named to replace Interim Chief Kenley, he could have complained, he could have made things difficult for the city.  He didn’t.  He was an utmost professional.  But more than that, during this process, every time he opened his mouth to speak – which was actually on very few occasion – he said the exact right thing.

Last night he made a critical clarifying point, as the city was struggling to respond to claims by Dave Ewing, of the East Davis Fire Protection District, that the city was in essence violating their agreement with this move.  Chief Black pointed out that by decoupling the rescue apparatus, the East Davis fire station will be staffed more often and be better able to respond.

Moreover, he made a parallel analogy that, in the 1970s and 80s, there was a debate in the police departments over two in a squad car and they found that when they put one in a car, they could cover a lot more ground and that there was actually less safety risk – officer involved shootings have dropped, despite these staffing changes.

City Manager Steve Pinkerton also deserves a tremendous amount of credit here.  He made a number of critical decisions, including the decision to bring in Scott Kenley and assign him to perform the audit, giving the city a range of options.  It was the first time an independent source had really looked at staffing.

The city effectively wasted money on two Citygate staffing reports – Citygate is a problematic organization, made up of retired firefighters, and most of them are not even fire chiefs.

Without the vision and fortitude of Mr. Pinkerton and his hard work, this would never have happened.

Mayor Joe Krovoza made this happen in several different ways.  In the direct sense, he was the lone voice pushing for the staffing changes in January and March.  When his colleagues went sideways and wanted to delay, he stayed strong, even as the lone voice.

But forget about that for a minute.  The more important contribution is that, in the fall of 2009 when he announced he was running for council, he also announced he was not going to take donations from the firefighters, other city employees, or those with business before the council.  His early declaration would lead to a major change in the culture of the council.

Rochelle Swanson quickly followed suit, after she announced in early 2010, and none of the candidates in 2010 or 2012 took money from the firefighters.  That meant that they were not beholden to the firefighters as their predecessors were.  It freed them.  They were able to make tough choices.

I will always respect Dan Wolk for making that tough vote.  But I am very disappointed that he and Lucas Frerichs failed to come through on this issue.

Mayor Pro Tem Dan Wolk argued that this is fundamentally a budget issue and he is “not convinced that service levels improve.”

“This is mainly about budgetary savings.  I respect that,” he said.  “To me that’s how I’m viewing this issue.  We are in a new financial era and the old way of doing things is no longer tenable.”

Mayor Pro Tem Wolk would argue that, while he believes we need to do things a new way, we still have difficult choices to make and in the area of public safety, he would much rather see the costs cut in the MOU than service reductions.

“I’m not going to support this motion.  I don’t see this move as the way we get there,” he said.

Mr. Frerichs reminded me that he is completely onboard on the contract issues, but he felt like this change would detrimentally impact public safety.

Some will note that the two are the most tied in to Democratic politics, the most friendly with Sacramento unions, and the most likely to perhaps seek higher office – although Mayor Krovoza is seriously considering running himself, doing so now after having cast a tough vote, and there will likely be accusations.

While I think Mr. Frerichs and Mr. Wolk made the wrong choice here, and deserved to be criticized for those choices, I think today should be about the positive, the changes that have occurred on council to make a day possible that even a year ago seemed implausible, if not outright impossible.

It has been a long and difficult fight.  I am disappointed in the level of dirty play by some in that union.  But I believe that there are good people, both in the Davis Fire Department and the UC Davis Fire Department who will look at this vote as a sign of progress and with a vision of hope for a better future.

The city of Davis and its council have won a huge victory toward not only sustainability, but, I think ultimately, a better model for delivery of critical services.  Could we use more resources?  Always.  But the challenge of leadership is finding the best way to utilize and mobilize the scare resources we have to provide for the best possible service we can get and, on that front, the council succeeded amazingly well.